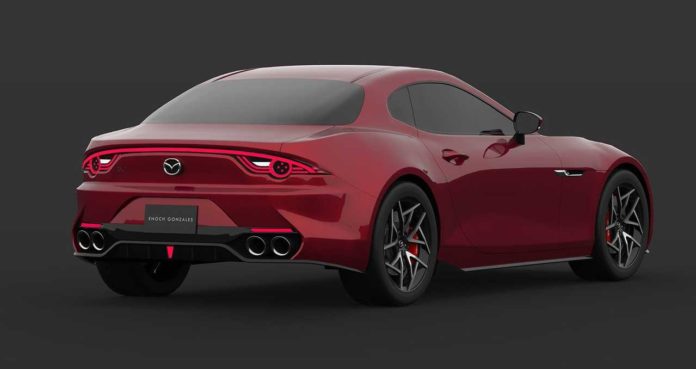 Mazda is still dreaming of bringing back the RX model cars. However, a designer’s RX-7 concept shapes expectations for the missed car. The concept car shows what auto lovers expect from the new Mazda RX-7.

Although Mazda came up with an RX-Vision concept that fascinated those who saw it in 2015, the car was not mass produced. The automaker did not give up a Wankel powered sports car, but described this project as a “race against time” due to the stiffening of emission laws. The company’s R&D president and chief designer stated that the RX model was still dreams last year. RX-7 design, which comes out of the hands of a designer, is the kind that can shape this dream.

Here’s the dazzling Mazda RX-7 concept
Enoch Gabriel Gonzales is one of those who long for the car and has almost recreated the Mazda RX-7 in his new work. Gonzales designed the vehicle inspired by the RX-Vision concept displayed in 2015 and the second generation coupe vehicle of the 90s.

The grille and headlights at the front were placed lower than current Mazda models, the Mazda logo was placed on the grille to remind the original RX-7.

The rear lights of the car are quite different and wider than the RX-Vision concept. In addition, the quad exhaust system is another remarkable detail. The designer also notes that he added an original detail to the headlights, which he called “eye socket”. This design states that it is a reference to the trend of the 80s foldable headlights.

It is definitely a stunning car and arguably one of the best renderings for a new RX. Although it is said that Mazda will produce a new Wankel motor car in 2020 to celebrate its centenary, unfortunately there is no such possibility on the horizon.

Google will reduce choice options for camera on Android 11

Jungkook and Jimin moments you missed on Dynamite

Techland’s Response to Claims Regarding the Development Process of Dying Light...

BTS: Jin had a difficult life before becoming an idol