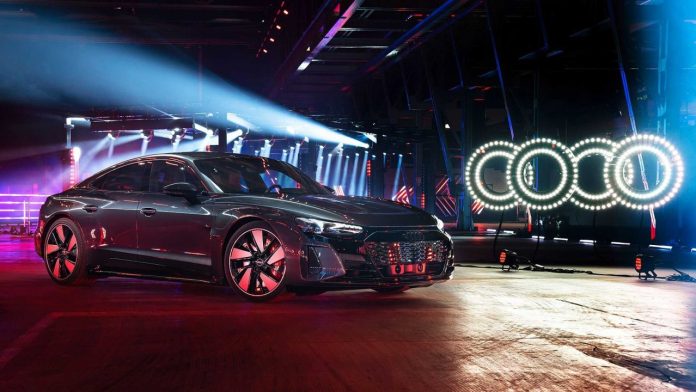 Audi made a strong contribution to the fast growing range of the electric automotive industry with its latest model. The E-Tron GT, a four-door performance sedan that provides a coupe-like appearance with its low roof structure, has gone beyond the Audi models that have been produced in a certain mold for many years and challenges powerful rivals such as Porsche Taycan. In terms of price and technology, it seems to be at the top of luxury cars.

The German brand wants to compete with the Model S and Taycan models, which are the pioneers of electric cars, and prioritizes daily ease of use and sportiness. Sharing the main building blocks with Porsche, this model will produce on the J1 Performance Platform.

The E-Tron GT will come in two different versions, as we know, the performance-oriented RS and the standard version. Both versions will come with an all-electric motor with a two-speed gearbox to aid performance. It includes Audi’s new 800V electrical architecture that allows higher charging speeds, while the 86 kWh battery is suitable for the 488 km WLTP (Worldwide Compliant Light Commercial Vehicles Test Procedure) range stipulated in European conditions.

Audi has talked about practicality many times during the presentation, the car, which offers a wide headroom despite its low height, is designed to accommodate four people comfortably. The E-Tron GT, which has a luggage volume of 405 liters, took advantage of the absence of an internal combustion engine and offered a luggage volume of 85 liters at the front. The model, which has a sporty look in the exterior design, has large wheels and a long wheelbase. He calls the prominent lamps at the rear “Quattro Blisters”.

The Audi E-Tron GT comes with a leather-free interior option, as well as a seat option that is sustainably produced with recycled PET bottles. While sustainability has shaken the world so much, it seems like Audi has joined this caravan. “As a team, we have created a Gran Turismo that combines performance and comfort,” says Markus Däsch, team member responsible for the interior design of the e-tron GT. It defines it as a car shaped by sustainability and efficiency, showing that the term luxury has changed in the field of electric mobility.

The entry-level Audi E-Tron GT quattro has a combined power output of 476 hp / 350 kW and 630 Nm of torque, while the RS model has a higher output power, producing a total of 589 hp / 440 kW 830 Nm of torque. Explaining that these engine powers will vary in various parts of the world, Audi said that it will use more powerful engines in North America.

Both the E-Tron GT Quattro and RS E-Tron GT have a dual engine setup with one motor for each axle. The 175Kwh front engine is used for both versions, while the RS version uses 335 Kwh and the rear engine’s output is higher than the Quattro’s 320 Kwh.

While focusing on delivering what Audi describes as “dynamic driving” by emphasizing suspension and steering systems throughout the brand’s presentation, it always moves forward with confidence, no matter how difficult it may be. The suspension itself has a double wishbone layout with heavy use of aluminum in the components. The E-tron GT uses an electro-mechanical steering system that aims to avoid being “sudden” but gives a sporty and direct feel.

While the RS model remains optional on the E-Tron GT Quattro, it has adaptive suspension as standard. The three-chamber air suspension system works in an organized manner with electronic shock absorbers and can be adjusted to lower or raise the vehicle depending on the situation. Controlled shock absorbers, standard throughout the series, work in conjunction with the Audi Drive Select dynamic handling system. With four different modes to choose from, comfort, efficiency or dynamically operating individual air suspension, shock absorbers, electric motors, two-speed gearbox and controlled rear axle differential lock come together to offer different rides.

The lithium-ion battery is identical in both the RS and quattro models of the E-Tron GT. It is an 86 kWh battery that integrates 33 cell modules, each consisting of twelve cells. Thirty modules create the lower level with a large recess in the rear, creating space for the rear passengers’ feet. This layout also contributes to the very low center of gravity.

Like the Porsche Taycan, thanks to the new 800V electrical architecture, the E-Tron GT allows charging at industry standard 270 kW using DC fast chargers. This will allow it to recharge its battery from five to eighty percent in just twenty two minutes. It is among the fastest charging speeds currently available in any EV. This allows it to recharge energy up to a range of one hundred km in just five minutes.