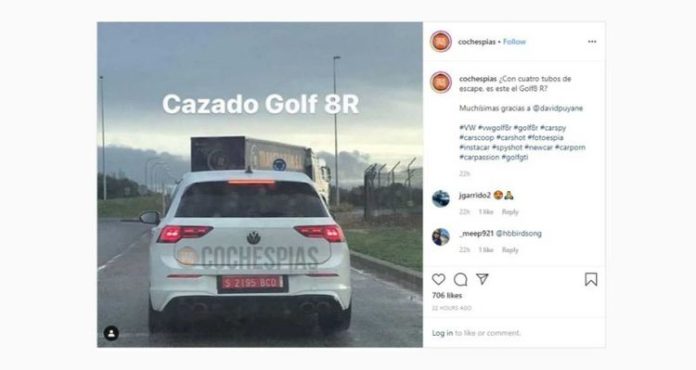 The 2021 Golf R, which Volkswagen will introduce towards the end of this year, will be the high performance option of the car series. The new Golf R was displayed in Spain with a four-exhaust prototype version.

When Volkswagen announced the 8th generation of Golf in October of last year, it made a big statement on the same day. With the announcement, the company was certain to introduce the hatchback car in 2020 with 4 different performance versions. The new 2021 Golf will be introduced with the GTI, GTI TCR, GTD and R versions.

The Grand Tourer Injection (GTI) version of Golf has been confirmed to be unveiled at the Geneva Motor Show in March, but we now have more. The new Golf R, which is said to be introduced in September, is in front of us with its image that reveals the car’s quad exhaust system. The photo shared by cochespias on Instagram was taken near the Applus IDIADA facility in Spain.

It is hard to say that the Golf R we see in the photo has something new than the quad exhaust system. However, let’s say that this tool is a prototype and that modifications can be made. However, the absence of the R logo in the vehicle does not go unnoticed.

A previously leaked VW slideshow showed that the Golf R would produce 245 kilowatts and 329 horsepower. If this is true, the new Golf R will offer 41 horsepower performance than the previous model. It is also said that a Golf R Plus version that will reach the s400 horsepower level is on the way.

Google paid $ 6.7 million to those who found them bug