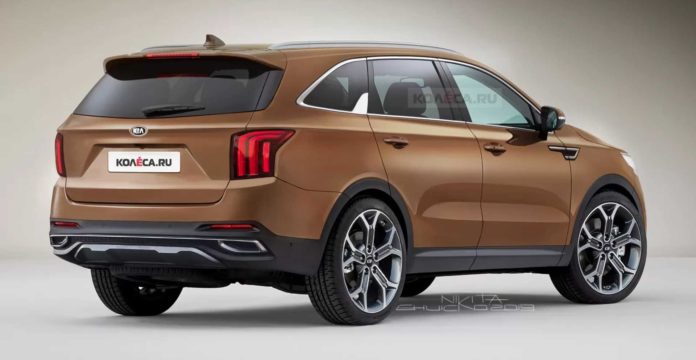 The new generation KIA Sorento has leaked photos that reveal the interior and exterior of the vehicle, although not officially announced. According to the pictures, the 2021 KIA Sorento seems to come with significant design changes compared to its predecessor.

The 2021 model KIA Sorento is expected to be introduced on February 17. The new mid-range SUV vehicle, however, was caught on cameras before it was officially introduced. Photos shared by Instagram user CocheSpias revealed both the exterior and interior design of the renewed Sorento.

KIA has made a stylish revision to the front of its next-generation vehicle. The car’s grille is framed by a metallic curved line and extends to the square-shaped lower bumper. Air intakes are more common in the new KIA Sorento. In addition, triple LED headlights have been integrated into the grille this time instead of the chrome strip that previously surrounds them, creating an integrated appearance.

The back of the new generation Sorento has a more extraordinary design. On the two sides of the body are vertical stops, which we have not used to see on KIA models. As the rest of the rear diffuser is camouflaged, details about the exhaust outlets are not visible. In general, the body of the vehicle maintains its known style, with some minor touches.

The interior design of the car is much different than the previous model. The new Sorento features a larger screen in the center console, a digital instrument panel behind the steering wheel, and vertical air vents next to the climate control buttons. New design touches and some new features in the car seem to be waiting for us.

The technical details of the new KIA Sorento are currently unknown. However, according to previous information, KIA will also launch the plug-in hybrid model for the new Sorento.