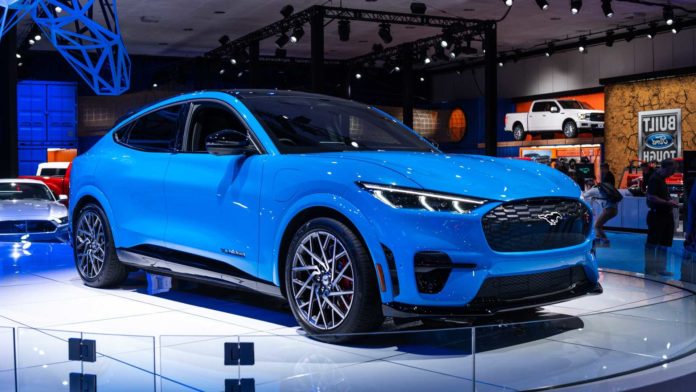 Ford Mustang fans were amazed by a car introduced in November last year. The fans of the Mustang series, which the fans loved so much, were a bit angry that it would be replaced by a performance-oriented, yet completely electrically designed car. This car, which is highly admired by some customers, did not deserve the name Mustang, which comes to mind when it comes to muscle fans.

The Ford Mustang Mach-E, introduced by the American carmaker Ford in November of last year, was an interesting car with its design and technical details. Fully electric SUV model of the car will be angry fans of the car because the name was Mustang. Aside from the disliked fans, the car began to reach good sales figures. According to reports, Ford Mustang Mach-E, which received 40 pre-order bookings last night, is gaining in popularity.

100 pre-orders at Tesla’s house:
The Ford Mustang Mach-E has received much attention recently at a Ford dealer in Silicon Valley, California, Tesla’s home. In the reports, the Sunnyvale Ford dealer recently announced that it has received exactly 40 pre-order reservations for the new full electric SUV model in just one night. With these orders, the total number of pre-order reservations at the dealer in Silicon Valley reached 100.

The importance of this figure for Ford is that Silicon Valley is the home of Tesla, where the Ford Mustang Mach-E was released as a competitor. Leading the electric car industry, Tesla Motors is headquartered in Palo Alto, California. Ford, which can sell its electric SUV model Ford Mustang Mach-E with a good figure here, seems to be a geared rival to Tesla.

BTS will participate in the Spiral Labyrinth-DNA Science investigation Ost