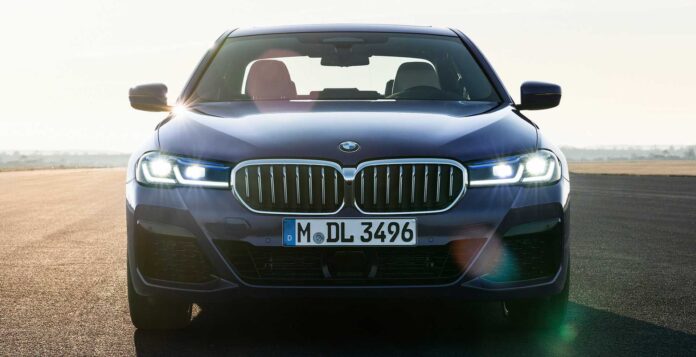 After numerous spy photos and a few leaks, the 2021 BMW 5 Series finally showed its face. Although BMW actually introduced the make-up version of the 7th generation 5 Series, we can say that the innovations made have prevented a make-up operation.

The 5 Series with makeup draws attention with its exterior design
The most obvious changes in the exterior design of the 2021 BMW 5 Series are the new grille and the standard LED headlights. As expected, the grids of the facelifted 5 Series have been slightly longer and wider than the 7th generation 5 Series. In addition, the vertical plates in the grille were made more prominent and were surrounded by a one-piece chrome material.

Changes were made to the headlights similar to his brother 3 Series. A new design has been achieved with L-shaped daytime running lights and black indicators on the outer edges. LED headlights come as standard in the 5 Series with make-up. In addition, BMW’s super bright Laserlight gets many new features, including the high beam option.

When we look at the rear design, new trapezoidal exhaust pipes and L-shaped stop design are among the outstanding details. As with the 3 Series, we encounter the M Sport Package with new front and rear bumpers, larger front air intakes and a different rear diffuser.

2021 BMW 5 Series interior design
When we take a look inside the facelift 5 Series, we come across the seventh version of BMW’s iDrive infotainment system, with a 10.3 inch as an option or a 12.3 inch central display as an option. While Perforated SensaTec flooring comes as standard, Dakota floorings are on the option list. These as well as the facelifted BMW 5 Series in Turkey, in launching special Harman Kardon Sound System, BMW Live Cockpit Professional and contains the wireless charging enabled smartphone connectivity system, “Special Edition” will be available in the structure.

BMW used new driver assistance systems in the facelift 5 Series!
The new BMW 5 Series plans to make the journey more enjoyable and safer with its driver assistance systems. Driving assistant as standard, lane leave warning and parking assistant are among the new 5 Series features. Also, the Back Driving Assistant used in the new BMW 3 Series and the new BMW 1 Series took its place in the facelift 5 Series. The Back Driving Assistant records your movements, allowing the car to leave the cramped areas for 50 meters without driver intervention. In addition, the BMW Smart Personal Assistant feature will come as standard with the facelift BMW 5 Series.

The plugin-hybrid engine options added to the 2021 BMW 5 Series are also among the remarkable innovations. The plugin-hybrid technology called eDrive, which is used in the 530e and 530e xDrive models, has a four-cylinder 184 horsepower internal combustion engine and a 109 horsepower electric motor. Another hybrid member of the series is the 545e xDrive. In addition to the six-cylinder internal combustion engine that produces 285 horsepower, this model has an electric motor that produces 109 horsepower.

There is no clear explanation for the 2021 BMW 5 Series release date and price. However, we expect it to be a bit more expensive than the 5 Series currently sold and take its place in dealerships in the third quarter of this year.

CW boss talks about the future of the DC series