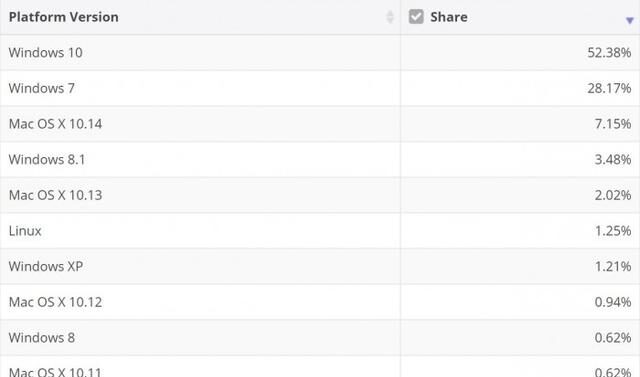 As of April 2020, the most preferred computer operating systems were announced. While Windows 10 has experienced a decrease in its market share, Apple’s macOS operating system stands out as the most profitable name in this process.

Market share measurement results based on the use of operating systems were announced. Although Windows 10 continues to lead the market, it has experienced a decline in market share. MacOS benefited the most from this drop.

Windows 10 remains on top
Windows 10 is currently the most popular operating system and is used on more than half of the computers in the world. The operating system’s market share was expected to increase due to the retirement of newly launched devices and Windows 7. April 2020 figures indicate the opposite.

According to NetMarketShare data, Windows 10 lost a small portion of its market share and the operating system’s market share declined from 57.34% to 56.08%. On the other hand, the market share of macOS increased from 3.41% to 4.15%.

Windows 7 decreased but not over
Windows 7 fell to a 25.59% market share after retirement. This drop in the operating system that has not received the new update and security patch is also quite normal. Microsoft also advises its users to switch to updated operating systems such as Windows 8.1 and Windows 10.

Security experts say that attacks targeting vulnerabilities in Windows 7 are increasing and these old systems are becoming a popular choice for attackers. The fact that Windows 7 has similar codes with newer systems also risks these systems.

Although Microsoft strives to popularize Windows 10, people are not enthusiastic and show a commitment to Windows 7 just like Windows XP. Retired in 2014, XP was so popular that even today the market share of the operating system was 1.32%.