Home Science 2019 is the Hottest 2nd Year Known in History 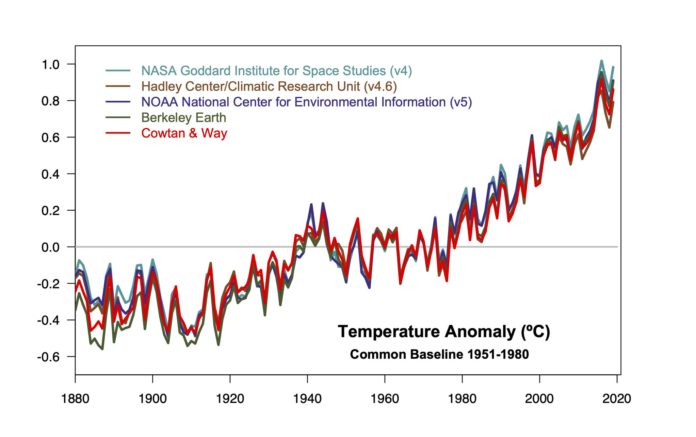 Although the hurricane El Nino in 2019 lowered the temperature slightly, global temperatures continued to rise last year. 2019 was the second hottest year since temperature records began to be kept.

In 2019, many companies and institutions continue to share content. One of the most striking of these contents is the global temperature analysis report prepared by NOAA and NASA for 2019. According to the report, the situation is not very bright.

Every institution, except the UK Meteorological Office, said that 2019 was the hottest 2nd year, while 2019 ranked 3rd in the UK. In the studies, data from satellites were used instead of ground level temperatures. Satellite data has been recorded since 1979.

El Nino brings cold, but the temperature did not fall:
El Nino is basically an ocean / atmosphere interaction. In this case, either the El Nino oscillation is seen where the temperatures are higher, or the warm waters coming to the tropical South Pacific are pushed by the opposing winds La Nina and the cold water deep in the seas comes to the surface. This oscillation is also effective on atmospheric phenomena.

This year, while La Nina grew stronger, El Nino weakened, but one of the two winds did not dominate the other. This means that in 2019 there was no increase in temperature due to the oscillation, but very little.

For 2019, researchers predicted exactly what would happen. Even though the situation is pleasing, it is quite difficult to say that it is a surprise joy. Global temperatures continued to rise.

Another point was the imbalance in temperatures. 2019 was recorded as the 34th hottest year for the US, but temperatures were not consistent in the country. Alaska has had its hottest year last year. The Southeast and the Mid-Atlantic had a very hot year, while the northern regions had a very cold year. The US suffered 45 billion dollars due to weather events and suffered the worst 4 years in this area.

Although the data to be obtained at the end of 2020 are likely to be close to this year’s data, the situation may result in worse than expected. In the first 15 days of the year, Australian fires could not be stopped, volcanoes went into operation, and many countries still refuse to fulfill their responsibilities in the treaties.