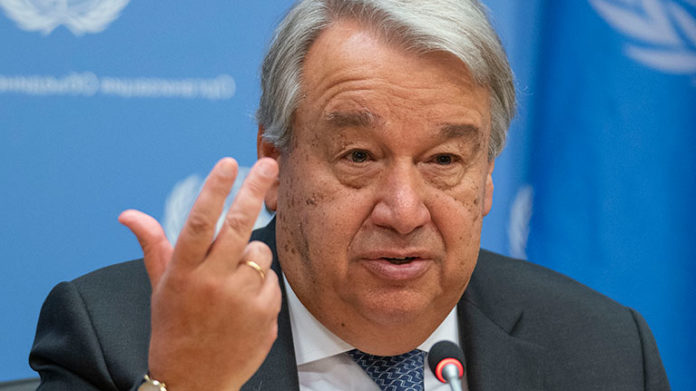 United Nations Secretary-General Antonio Guterres has announced that he has launched a $ 2 billion global humanitarian aid plan to tackle the COVID-19 outbreak in the poorest countries in the world.

The coronavirus outbreak is showing its effects all over the world. Both local governments and international organizations say they have taken measures to stop this pandemic.

Unfortunately, not every country is strong enough to take the necessary measures. In these countries, measures must be taken to prevent diseases. At this point, responsibility falls to international organizations.

Call from the UN secretary general
United Nations Secretary-General Antonio Guterres announced that he has launched a $ 2 billion aid plan for the poorest countries as part of the fight against the new type of coronavirus.

Guterres, who made a statement about the outbreak, said that the outbreak threatened all humanity and that it would not be enough for countries to fight individually. Guterres stated that the whole world should fight against the virus jointly.

The UN Secretary-General, stating that even countries with strong health systems and high levels of welfare are under pressure; He said that poor countries trying to deal with war, natural disasters and climate change caused by humanitarian crises started to be affected by the epidemic.

The value of the aid will reach $ 2 billion
“Today, we are launching a $ 2 billion global humanitarian aid plan to support the fight against the COVID-19 outbreak in the poorest countries in the world,” Guterres said in a statement. The Secretary-General of the United Nations also called on governments to support the global aid plan.

Aid will be used for countries in the Middle East, Asia, Africa, and South America. The United Nations Secretary-General said that the number they demand from the states is “a drop in the ocean” and 1 per thousand of the 2 trillion dollar package spoken in the country senate for the US economy.

In the worst possible scenario, Guterres stated that the disease would spread like wildfire in these countries, making ill people and causing millions of deaths. United Nations humanitarian chief Mark Lowcock also announced that the UN emergency fund has been charged $ 60 million for the plan.

Great convenience to students from Google!

An unexpected partner joins the purchase of

Spotify users couldn’t listen to music for an hour

Jordyn Woods: she reveals a funny outfit for containment!

The SOS of migrants to López Obrador

Huawei focuses on the cloud while fighting the US

What does it mean to dream of your partner?

Ryanair CEO: “I’ve Never Invested in Bitcoin, I Never Will”