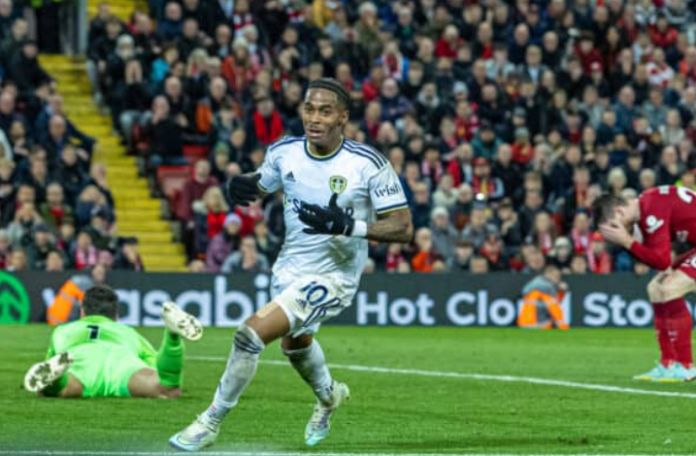 Not wanting to tempt fate, but when it comes to Liverpool’s hardships in the 2022/23 Premier League season, after defeating Man City with defeats to Forest and Leeds, it will take a lot of effort to set a low benchmark…
Two weeks ago, we discovered that we had the foundation for a potential rehabilitation of our league campaign, as a tense and antagonistic day at home with the reigning champions ended with three points scored.

Three days later, this was reinforced by another home win over West Ham.

With Forest and Leeds on our radar, the path to a healthier position was illuminated, something to add to the Champions League picture, which was developing a little more positively than it looked after the first night beaten at the hands of rampant Naples.

By no means reaching the high notes that we know we are capable of, Jurgen Klopp and his team relied on an uneasy alliance with potential consistency.

All of this has now been cancelled in the last 180 minutes plus compensated league football time. We go back to the drawing board to create another fresh plan of how to do step by step.

Liverpool is a team that thrives on sparkling confidence, but it is a team that struggles with routine. We are the lords of the peaks and the cowed servants of the hollows.

On the one hand, we can be mental monsters, on the other hand, we are afraid of the poor form that lives under the bed, unable to put up with it when it raises its ugly head.

If these downtime are taxes we have to pay for the extremely good times we delivered, then so be it.

It’s still infinitely better than living at the average level we’ve been dealing with for the better part of three decades, when we occasionally glimpsed the promised land only for the mirage to dissipate.

A newly acquired title and a metronomic figure who has moved on to a new challenge, Liverpool have essentially exhausted themselves with their efforts of the previous three seasons.

We were terrible until the clock turned back, and even then we were still fighting for consistency, achieving positive results, but not giving our best on a regular basis to the best of our abilities.

Calling the game against Forest, it wasn’t due to a complete lack of effort against Leeds. It was all about making too many basic mistakes and not catching the moment when our chances really appeared, apart from Mo Salah equalizing the score.

The will was ready on Saturday evening, but not in the spotlight.

The way we conceded the first goal was a wonderful synopsis of our season.

Individual mistakes are clearly being made, some heads and forms fall more than others, but the more serious problem is the failure of the collective.

The nature of the wounded supporter means that the scapegoats will still be determined by an increasingly agitated congregation.

In the mid-1990s, Terry Venables also became a bit of a thing of the past with the deployment of the 4-1-2-1-2 scheme. It’s regressive football compared to what we’re used to; it makes us more predictable and much more flexible.

Opponents are allowed to think more about what they can do with the ball, and not about how to prevent us from doing what we do with it.

On the Venable scale, the next step will be the formation of a Christmas tree; I believe there are 55 trading days left until the big day, this is the season. 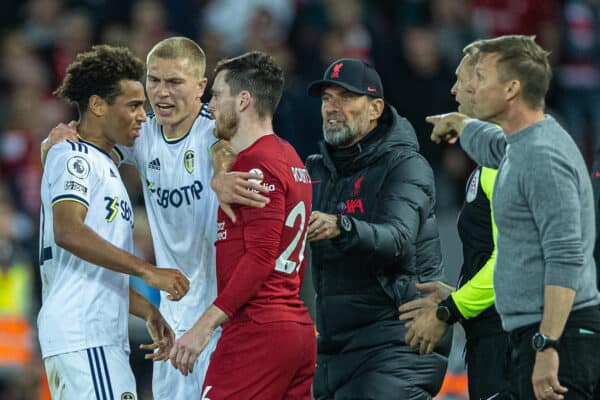 Off the pitch before the game, the concept of Saturday night football made many of those I spoke to scratch their heads, most of them were disoriented that they were called to Anfield at the time of the week that they usually associate with ordering football. eating takeaway and watching TV programs that they claim to be their other half make them watch, but at the same time secretly have fun.

Apart from the result, I’m all for it, at least in theory. I’m usually attracted to Saturday’s Serie A matches to fortify myself with takeaway food.

I like the continental approach to this and the fact that it’s less rushed. There is less traffic on the road, both at the entrance and at the exit. Everything is very adult, or at least it should be.

The problem is that most of the English football fans are not old enough for this. Visiting sections are increasingly reminiscent of mass stag parties.

On Saturday night, I’m sure someone named Billy from New Wortley would have been thrilled to be stripped and tied to a lamppost as he was returning to his carriage bound for West Yorkshire. Great days, etc.

“Always the Victims” was played in less than three minutes, new performances in the second half, stories about the national anthem being sung in a club shop in the city, just like it was in the guest section, and copies of The S*n held high on Lime Street.

In the never-ending battle to stay cool, the reason is always out of reach for a growing number.

What strikes me the most is that in an age of perpetual austerity, people have infinitely cheaper ways to get weekly corrections for being complete and utter idiots, instead of splurging on Premier League tickets.

Unfortunately, this level and the regularity of pre-planned antagonism have not gone away. Soon there will be a pleasant surprise when a group of fans will come to Anfield, and not poor ballads and Hillsborough ditties are being sung.

Forward to our next attempt a step forward we are going.