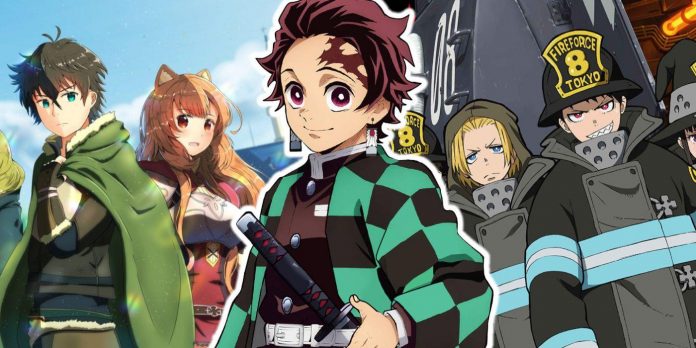 Demon Slayer follows a young man named Tanjiro as his family is killed by a demon and his sister is transformed into a demon in the process. Rather than accepting his sister’s fate, Tanjiro insists on saving her life and turning her back into a human.

Demon Slayer is undoubtedly one of the most beloved anime in the past few decades, and although the depth and complexity of the series is its signature, there are other shows that can offer viewers a similar experience. For fans that truly love Demon Slayer, there are plenty of other anime to check out that explore dark, supernatural themes, epic fights, and compelling plots.

Updated on August 4th, 2022 by Tanner Fox: Often considered to be in contention for a spot among the new shonen “Big Three” series, Demon Slayer combines a beautiful art style and a compelling story with high-octane action and a subtle blend of humor that culminates in a series on which none should miss out.

That said, while a Demon Slayer season 3 has been confirmed, it could be quite some time until the franchise reemerges. Fortunately, there are plenty of very similar shonen series that fans may want to check out in the meantime if they’re looking for the best anime like Demon Slayer.

This is a somewhat older series, and, although the manga has endured some hiatuses, the adaptation has a special place in the anime world. D.Gray-Man is set in Gothic Europe in a world where demons known as Akuma can pop out of people at any time.

Exorcists are magical warriors who patrol the streets to lure out and destroy Akuma, but that’s not all there is to it. Hero Allen Walker soon gets embroiled in the Millennium Earl’s wicked plot to destroy and remake the world, and only Allen and the other exorcists can stop him.

This series is another strong contender to be a member of the new generation’s big three. My Hero Academia imagines a world where most people are born with superpowered quirks, meaning there are more than a few heroes and villains doing battle in the streets.

In a world in which most of the population has a unique superpower known as a quirk, Izuku Midoriya, the series protagonist, was born without one. However, a chance run-in with his all-time favorite hero All Might changes things, and he inherits his idol’s power and embarks on a journey to become the greatest hero ever to live.

Fire Force takes place in a world that rebuilt itself from a Great Cataclysm—which was an apocalyptic fire—some 250 years ago. But, there still isn’t peace; some people erupt into Infernals, or fire demons, and the fire soldiers must battle them and send their souls to heaven.

Worse yet, there is a cult of white-robed villains who seek to reignite the Great Cataclysm, and Fire Force’s hero Shinra Kusakabe and his allies must put an end to this threat at all costs—or all will be lost in the flames.

At first, this series may seem decidedly different from Demon Slayer, but the core idea is the same. This educational anime imagines each specialized cell in the human body as a uniformed worker, and there are more than a few germs to fight.

In an amusing and educational way, Cells at Work! is a “monster hunter” anime that depicts the microscopic battles taking place in the human body every day. Germs and viruses are huge and scary, and knife-wielding white blood cells must fight them to the death.

This is an isekai series where young adult Naofumi Iwatani finds himself summoned to a European-style fantasy world that’s about to face a deadly siege by legions of monsters and undead. He bears magical shields, while three more heroes wield a sword, bow, and spear.

It’s not easy fighting off such a multitude of monsters, especially when Naofumi finds himself an outcast who must fend for himself after he’s betrayed. So, he forms a new party and takes the fight to the enemy by any means necessary—but time is running out!

The Beserk manga series has had several anime adaptations, but fans should naturally start with the first to be released, 1997’s Berserk. This series focuses on the Black Swordsman arc of the manga and follows a talented swordsman who joins a group of mercenaries.

While the series only ran from 1997-98, it was a commercial and critical success, with many praising its mature themes and suggesting that it is one of the finest examples of dark fantasy anime of all time.

Re:Zero tells the story of a young man named Subaru who is transported to a fantasy world from the modern-day. In this world, Subaru learns that, whenever he dies, he comes back at a certain point before his death, giving him the chance to try again.

While Re:Zero has only had one season so far, it is an incredible anime that is a must-watch for anyone. Not only is the conceit of the show interesting and unique, but it’s also home to some of the best anime characters of the past few years.

Ushio & Tora tells the story of a young man, Ushio, who discovers a demon, Tora, beneath his temple with a spear embedded in the creature’s chest, pinning him to the wall and keeping him in place.

Eventually, this begins to attract other demons and monsters to the temple, forcing Ushio to free Tora in order to help fight them. Ushio ultimately teams up with Tora, and the two begin to fight various supernatural forces around the world.

Based on the manga of the same name and set in the Sengoku Period of Japanese history, Dororo follows the story of a young ronin named Hyakkimaru who, along with a character named Dororo, must battle several demons in order to get his stolen body parts back.

In the same vein as Demon Slayer, Dororo focuses on a world in which demons are prevalent and the main characters must battle them. This series has some intense fight scenes and should be more than capable of keeping Demon Slayer fans interested.

Goblin Slayer, as the name suggests, is an anime about slaying goblins. Set in a fantasy world that bears a close resemblance to popular real-world video game RPGs and is complete with ‘levels’ and quests that are posted on an inn’s noticeboard, Goblin Slayer has all the action and fantasy that a fan of Demon Slayer would enjoy.

That being said, the first episode is infamous for its disturbing content and would almost certainly not be suitable for all viewers, so caution is warranted.

Fullmetal Alchemist: Brotherhood is considered by many to be one of the greatest anime shows of all time. The series follows two brothers, Edward and Alphonse, as they try to find the Philosopher’s Stone so that they can bring their bodies back to their original states.

During a fateful ritual in which the two brothers attempted to bring their mother back from the dead, Edward lost a leg, and Alphonse lost his body. In order to bring his brother’s soul back, Edward sacrificed his arm, and Alphonse’s soul entered a nearby suit of armor.

Adapted from the popular manga of the same name, Black Clover debuted in 2017 and centers around the life of Asta, who was abandoned outside of a church as a baby. Despite the fact that nearly everyone is capable of magical power by birth, Asta does not have an affinity for magic.

Driven by the desire to become the next Wizard King, Asta and his friend/rival Yuno embark on a quest to join the Magic Knights.

Debuted in 2011, Demon Slayer draws quite a bit from Blue Exorcist; both deal with young heroes compelled to battle demons as a result of personal tragedy. One major difference, however, is that Blue Exorcist includes quite a bit of Christian mythology, as a war between Satan and the Vatican is a backdrop for the series.

Blue Exorcist follows Rin Okumura on a quest to become a skilled exorcist capable of defeating his father Satan. Wielding a notorious blade and capable of conjuring a cleansing blue flame, it’s full of action, suspense, and intrigue, and it’s a perfect fit for any fan of Demon Slayer.

Bleach is one of the most iconic anime of all time. The legendary shonen anime tells the story of Ichigo Kurosaki, a teenager who ends up becoming a Soul Reaper after a chance encounter with another Soul Reaper named Rukia Kuchiki. The series follows Ichigo as he hones his powers and abilities, defeating terrifying enemies in the process.

The series has some of the best anime fights of all time and will certainly be enjoyable for those who liked Demon Slayer, as both feature protagonists who are constantly training to get stronger in order to defeat supernatural threats.

The be-all-end-all of shonen anime, Dragon Ball begins with a quest instigated by Son Goku and Bulma to assemble magical objects known as Dragon Balls so that they may be granted a wish by the dragon Shenron. What follows is a master class of training arcs and epic battle montages that set the stage for the rest of the genre.

Dragon Ball and its ensuing outings have become notorious among anime fans the world over, and even those with almost no familiarity with the medium have likely heard of it. While it’s not particularly similar to Demon Slayer, it’s a must-watch for any shonen anime viewer.

Inuyasha is another famous anime that has stood the test of time. The series follows a 15-year-old schoolgirl from modern-day Tokyo who falls into a well at her family’s shrine and ends up being transported back in time to the Sengoku Period in Japan. There she meets the half-dog demon, Inuyasha.

Aside from the presence of demons and high-octane action, Inuyasha has an incredibly compelling story with fantastic characters that will please all anime fans.

Videogame Studio, Switch Analysis. Programming Has Never Been So Easy