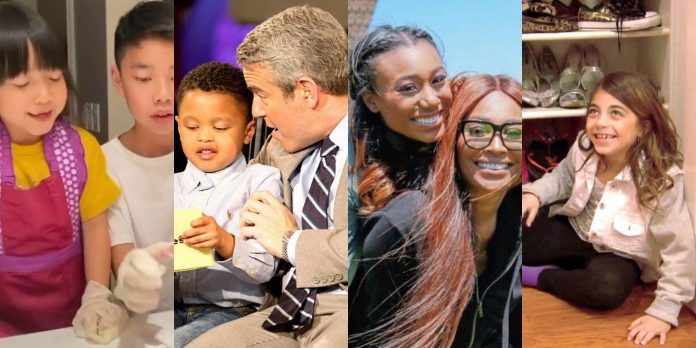 One of the best parts of The Real Housewives is following the personal lives of the Housewives the longer they’re on the show. And while the romantic lives of these women are fascinating and dramatic on their own, it’s their kids that fans can’t get enough of.

Not every Housewife, however, showed off the lives of their children. Being in the public eye can be taxing for anyone so they shield their kids’ lives from the cameras. However, the Housewives that do show off their kids and their happenings have made fans swoon over their adorable households. From elementary school to young adults, fans certainly have their favorite kid stars from The Real Housewives.

Updated on June 7th, 2022, by Lynn Gibbs: There is a multitude of things that make a Housewife a fan favorite. Those that share every aspect of their lives and have nothing to hide are often the most beloved because it creates more depth for their storylines, regardless of the season. Since most of the Housewives are mothers, some share snippets of their kids, which make them more relatable for viewers who are also parents. From busy mornings before school to driving licensees, to getting ready for college, The Real Housewives fans have their favorite Housewives kids that they love watching on TV.

Fans have watched Milania Giudice grow up in front of the cameras for 12 seasons of The Real Housewives of New Jersey. When the show started, she was a little girl who was obsessed with dresses and her daddy. She was a part of some of Teresa’s best episodes in the show’s early days but nowadays, Milania is 16 years old and is becoming an independent young lady after her parents’ divorce.

And while fans adore Teresa and Joe’s eldest daughter Gia, it was Milania who stole the show. She was wild, outspoken, and had hilarious one-liners. Today, Milania is still the same, outspoken girl and fans have cherished watching her journey into adulthood over the past couple of years.

Heather Dubrow was one of the best cast members on RHOC when she joined in season 7 before exiting in season 10. Her fabulous marriage to a celebrity plastic surgeon and wealthy lifestyle made her day-to-day on the show interesting.

With her husband, Heather had four children. In the earlier seasons, it was adorable watching her wrangle her young kids. And now that Heather is back on the show, watching her kids as young adults have been heartwarming. Her oldest daughter Max has been endearing to watch, especially hearing about her journey with her sexuality, release of her book, and now attending college.

Lisa Vanderpump was an original castmate of RHOBH and was a memorable Housewife in the franchise as a whole. Her success story as a restauranteur was commendable and her marriage to Ken Todd was fun to watch for fans. More importantly, the friendships she created on RHOBH were even more entertaining.

When Lisa wasn’t working, she spent time with her adult children, Pandora and Max. Viewers saw Pandora get married and work in the family business. Her son Max did the same and was even shown on the spinoff Vanderpump Rules. Fans loved their independence and watching their entrepreneurial spirit

Jennie Nguyen was one of the newer Housewives to join The Real Housewives of Salt Lake City in season 2. And while season 1’s storylines were outlandish and engaging, season 2 was more dramatic, and part of that reason is thanks to Jennie.

Jennie is a mother of three kids — Atlas, Triton, and Karlyn. As adorable as all her kids are, her youngest, Karlyn, shined above the rest. Right off the bat, Karlyn glimmered in front of the cameras with her jokes and one-liners. More than that, she has a love of science and is often shown doing science experiments in her free time. However, Karlyn’s fun-loving energy wasn’t enough to save Jennie from controversy. Jennie was fired after season 2 for controversial social media posts.

Similar to Milania Giudice, Portia Umansky grew up in front of the cameras on The Real Housewives of Beverly Hills. She was the youngest of Kyle Richards and Mauricio Umansky’s daughters and has been comedic relief over the years.

Fans love watching Kyle as a mom and have sympathized with her in season 11 of RHOBH after COVID-19 hit. Kyle felt like she was failing as a mother after her daughter had to be homeschooled and lost contact with her friends. Kyle and Portia’s mother-daughter bond is relatable, which is why fans adore Portia so much.

Frankie Catania is Dolores Catania’s only son on RHONJ. When viewers met Frankie, he was just a teen applying for colleges. Now, he’s a young man. Fans watched as he chose a school not far from home and moved out of the nest, which broke Dolores’s heart. Fans supported Dolores as she struggled with something as relatable as empty nest syndrome.

However, even with Frankie’s busy schedule, he continued to pop up on the show and offered his mom valuable points of view in various situations. Because of his sweet nature and love and care for his mother, fans love watching their bond on TV.

Lisa Barlow prides herself on being a business-focused woman and a great example of a hard worker for her two sons, Jack and Henry. While Lisa talked more about her friendships and the businesses she owned, she also shared how her sons were following in her footsteps.

She created the business Fresh Wolf with her sons in mind, hoping that they’ll run the business when they’re older and more business-oriented. Seeing how influential she was to them and how hard they worked was amazing for fans to see.

Cynthia Bailey joined The Real Housewives of Atlanta in season 3. With her was her daughter Noelle. Noelle joined the show at a vulnerable stage in her life but handled her teenagehood beautifully in front of the cameras and public criticism.

At the time, Cynthia was a single mother and Nene Leakes became the villain after she criticized Cynthia’s parenting style for being too friendly with Noelle. However, Cynthia and Noelle had the last laugh because their relationship was powerful to watch. Through every season, storyline, and situation, Noelle handled things maturely and beyond her years. She was respectful and easygoing, making her one of the fans’ favorites.

Gizelle Bryant has three daughters with her ex-husband — Adore, Grace, and Angel. As part of The Real Housewives of Potomac, Gizelle’s relationship with her daughters has been shown heavily. With Gizelle’s ex living in Atlanta, Gizelle is a single mother who tried connecting with her daughters without much help. Hilariously, fans love how honest Gizelle’s daughters are and brought Gizelle back to reality when she got too dramatic.

As many fights as Gizelle has been a part of, it’s her role as a mother that stands out the most since her daughters are great examples of smart, fun. and sweet teenagers.

Wendy Osefo joined the cast of RHOP in season 5. As a political commentator, professor, businesswoman, and wife — Wendy’s resume is impressive as is. However, she’s also a mother of three — Karter, Kruz, and Kamrynn.

As busy as Wendy and her husband are with work and filming, they make sure to make time with their children a priority, and it shows. Jaxmwagnar told Reddit how “well-behaved” and “cute” Wendy’s kids were. Others adore how relatable the three are to other kids their age instead of being tainted by stardom. Her family has been fun to watch over the past two seasons thanks to these kids.

Caroline Manzo introduced her three adult children on season 1 of RHONJ, Albie, Lauren, and Christopher. Unlike a few of Caroline’s castmates, the Manzo kids weren’t necessarily kids. They were all in college or working for the family business since season 1.

Due to their older ages, they offered their mom sage advice and hilarious moments on camera. They had their own storylines, which made the family, as a whole, more fascinating. Fans loved watching the Manzos so much that Bravo set up a spin-off called, Manzo’d with Children.

Kandi Burruss is one of the more likable Housewives of RHOA. Unlike a few of the other Housewives, she never needed the show to be successful since she was already an award-winning singer and songwriter.

When Kandi first started the show, she was a single mom to her daughter Riley. Even from a young age, Riley was always mature and respectful of her mother. After appearing for the past 14 seasons, fans got to know more about Riley and admired the woman she came to be. Because of the playful nature that she has with her mother and the role she has in her younger brothers’ lives, fans love Riley Burruss.

Briana Culberson from The Real Housewives of Orange County is Vicki Gunvalson’s eldest child and only daughter. Considering Vicki was a part of RHOC for 14 seasons, Briana felt like a Housewife to fans because of how involved she was. She was the voice of reason and one of the more level-headed people in Vicki’s life. Thanks to Vicki’s over-the-top personality, there are plenty of things that she’ll never live down but Briana’s opposing personality gave a great balance to the show.

Briana and Vicki have had their ups and downs over the years but they’re back on track now that Vicki is off the show. Due to Briana’s realistic points of view with her dramatic mom, Briana was one of the best Housewives “kids.”

Phaedra Parks joined RHOA in season 3 before making her exit in season 9. During her time on the show, viewers saw her expand her career and give birth to two sons, Dylan and Ayden. As sweet as both boys were, there was something special about Phaedra’s youngest, Ayden, that was shown on TV.

Both boys acted like mini-gentlemen and made viewers swoon over their cuteness. One of Ayden’s sweetest moments was when he had his first day of school. The entire morning was shown on camera, making viewers tear up as Ayden told his mom he would miss her. He was one of the most adorable Housewives kids.

The former deputy district attorney of Los Angeles said that the...