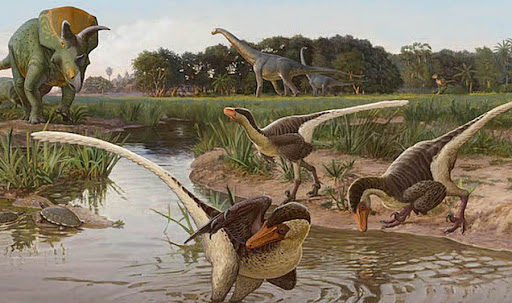 Researchers discovered the fossil of 3 flying reptile species belonging to the pterosaurus family that lived 100 million years ago in Morocco. The fossils of pterosaurus, which have lived in almost all continents, can also be an important part of explaining the evolutionary history of the continent.

Fossils of three species belonging to the pterosaurus family were found in a river ecosystem that was fertile for dinosaur, fish, turtle and crocodile fossils by David Martill from Portsmouth University, Nizar Ibrahim from Detroit Mercy University and Megan Jacobs from Baylor University.

Pterosaurus, flying predators, are known for their teeth in their beaks and the hands on their wings. Herbivores were rarely found among the pterosaurus in the world of carnivorous dinosaurs and crocodile-like predators. However, many members of the species were usually fed fish.

Professor David Martill, one of the researchers, said that we had an important period in terms of finding pterosaurus fossils. Martill said that only three fossils of pterosaurus species were found in the first three months of 2020.

Based on the jaw and tooth fragment fossils in the region of the Kem River Beds in Morocco, the researchers found that the wings of the pterosaurus were three to four meters wide. Pterosaurus hunted fish with their beaks with teeth when flying. Pterosaurus were looking for food in large areas, such as the albatrosses living today, with their huge wings.

Nizar Ibrahim, a researcher at the University of Detroit Mercy, said that the pterosaurus fossils found opened an important window on the pterosaurus world of Africa. Saying that there is a lot of information about pterosaurus in Europe and Asia, Ibrahim said that it is exciting to find examples of these hunters in Africa.

Anhanguera species, one of the pterosaurus species with fossils in Morocco, was previously found in Brazil. Similarly, fossils of the species named Ornithocheirus have been found in England and Central Asia before.

What Happens in Your Brain When You Forgot Your Car’s Parking...