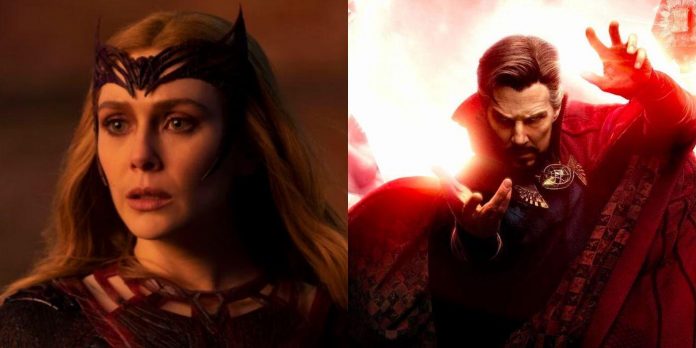 Though it’s been a few months since Doctor Strange in the Multiverse of Madness came out, fans have not stopped talking about it since its release, and writer Michael Waldron revealed that the Scarlet Witch was originally supposed to be the villain for Avengers 5. Of course, one of the best parts of the film happens to be the Scarlet Witch’s villainous arc that was not only terrifying but emotionally riveting as her motives to unlock the multiverse meant reuniting with her twins in a different dimension.

Even today, people still have a lot of opinions about this movie, analyzing the characters, their relationships, their arcs, and their future in the MCU. Though the movie was generally received well, some Redditors have voiced some extremely unpopular ones, whether Wanda’s redemption or the film’s disappointing writing.

While Doctor Strange in the Multiverse of Madness didn’t  live up to people’s particular expectations, it was still widely received well by fans, earning an audience score of 85% on Rotten Tomatoes. With its star-studded cast, stunning visuals, and horror movie style, the movie entertained audiences all around the world. However, some Redditors claim that the movie is terrible.

Redditor calixan96 writes, “Everything post Endgame is a cauldron of plot holes, bad writing and unnecessary and cringy jokes. That’s basically what this movie’s about.” While the film isn’t perfect, this Redditor’s opinion that it’s terrible is quite an unpopular one. Generally, Marvel fans enjoyed the uniqueness of Doctor Strange in the Multiverse of Madness and appreciated the characters, their journey together, and their relationship.

Sam Raimi is a very well-respected director who is famous for his work in the horror and superhero genres – famously directing Tobey Maguire’s Spider-Man trilogy. Raimi has a number of well-known films in his repertoire, but some fans argue that he is not the right director for superhero movies.

RoguexAce writes, “I grew up with Sam Raimi in Xena and Hercules, Spider-Man, Army of Darkness and they were basically all the same, it’s fun for a little kid but there’s absolutely no substance.” Raimi is widely praised as a director, and most fans agree that he did a wonderful job with Doctor Strange in the Multiverse of Madness and that he is talented at working in the superhero genre.

Wanda Shouldn’t Have A Redemption Arc

Wanda Maximoff fully embraces her villainous side in this movie, terrorizing the multiverse as the Scarlet Witch. Compelling, tragic, and relentless, she makes an incredible villain, and her redemption arc, while brief, is complete, heart-wrenching, and beautiful. While most fans love how Wanda redeems herself, some argue that she shouldn’t have a redemption arc.

Redditor LazyTwatt argues, “They shoulda just killed the Scarlett witch and made Wanda’s story have a tragic ending instead of making her have a sudden epiphany and become good again.” Though this Redditor is clearly bothered by Wanda’s redemption, most people think that it makes sense, as her motivator is her love for her children, and once she accepts that, she repents of the terror she’s inflicted on the multiverse, and there are ways the Scarlet Witch could earn her redemption if she does return to the MCU.

Doctor Strange in the Multiverse of Madness stars quite an impressive roster of characters. In a movie with a lot of high-profile characters and cool cameos, it can be easy to lose sight of the main character, but most fans think that it’s still Doctor Strange’s journey. However, a Redditor claims that Strange is completely useless in his own movie.

RELATED: 6 Multiverse Saga Set-Ups Teased In Doctor Strange in the Multiverse of Madness

User Excellent-Wing4271 says, “If he hadn’t been there the plot wouldn’t have changed…It’s impossible to be invested in a story that has the characters you’re supposed to like just idly standing on the periphery doing nothing.” While Doctor Strange may have been overshadowed a bit, he still plays an integral role in his own movie and in the future of the MCU.

Scarlet Witch is one of the most sympathetic villains in the entire MCU, driven by her love for her children and her desire to be reunited with them. Even though she inflicts immense pain on others, most fans sympathize with Wanda, as her motivations are based on love. Some Redditors, however, think that her redemption arc is forced and she should not be sympathized with.

Redditor Vainslayer13 writes, “And all the reviewers and blind fans will insist that Wanda’s turn at the very end is somehow noble and inspiring. Wanda is not just a villain, but the worst kind of self-absorbed monster and viewers are supposed to feel sorry for her.” While the love towards the Scarlet Witch clearly bothers this one Redditor, most people agree that she deserves compassion and understanding.

America Chavez Should Have Died At The Beginning

Doctor Strange in the Multiverse of Madness introduces America Chavez, who will likely play a large role in the MCU going forward. America and her powers are central to the plot, with Scarlet Witch chasing her throughout the multiverse to steal her powers. That being said, some fans think that America should have died at the beginning of the movie by alternate Stephen Strange.

LampreyTeeth argues, “If America was killed by Strange to begin with, so many people wouldn’t have had to die. I wouldn’t say the deaths of 5 Heroes really equate to the life of a single girl.” Most fans agree that America plays too large of a role to be killed prematurely and that the movie would’ve been different without her. Furthermore, her presence could impact the MCU’s future.

The Writing Is Terrible

Marvel movies have been popular for a long time, with their writers being skilled at writing poignant scripts. Lines from Marvel films like, “I love you 3000,”  have become famous and iconic, with people everywhere quoting them. However, some fans argue that the writing in Doctor Strange in the Multiverse of Madness is horrible.

RELATED: 10 Best Doctor Strange In The Multiverse Of Madness Scenes To Rewatch On Disney+

Touch_Used says, “Some of the lines were laughably awful. He literally said ‘you will have to do more than kill me to kill me’ and then when Christine said ‘go back to Hell.'” Though some of the dialogue may be on the cheesy side, most fans don’t have a problem with the writing, as it offers some warm moments and touching lines.

The Visuals Are Bland

Marvel movies are famous for breathtaking visuals to paint their battles and action sequences. They have been at the top of the CGI game for a long time, especially as their popularity has risen. Some Redditors argue that the visuals in this movie are uncharacteristically terrible.

GlipGlopnar writes, “Even its visuals are lame as hell. The first Doctor Strange had far more interesting locales or visuals, while this one feels so uninspired for a MULTIVERSE movie.” Even though the visuals of this movie bothered this one Redditor, most fans agree that they were beautiful and unique to a Marvel movie.

The Illuminati Is Disappointing

One of the things that fans were most excited to see in this movie was the Illuminati, a covert society of superheroes with the greatest minds in the world. The Earth-838 Illuminati in the movie certainly lived up to expectations, with Captain Carter, Black Bolt, Maria Rambeau’s Captain Marvel, Reed Richards, and Professor Xavier making their MCU debuts. That being said, some Redditors argue that the Illuminati are incredibly disappointing.

Human-Site9380 writes, “The guys were acting like clowns, trying to gang up on Wanda instead of Reed at least first trying to talk things out, they used no tactics at all, for the group of smartest people in the universe they sure were stupid af.” While this fan was disappointed by the Illuminati, most fans loved finally seeing them in the MCU.

Ultimaurice17 writes, “It is literally impossible for them to be in the same multiverse. The America Chavez from the comics and movies are not the same, but America is stated to have no variants.” The MCU Earth shouldn’t be Earth-616, as the comics and movies should be separate. That being said, most fans agree that this is definitive proof that the Marvel world is Earth-616.

Sunny Opposites is the show Rick & Morty wants to be...