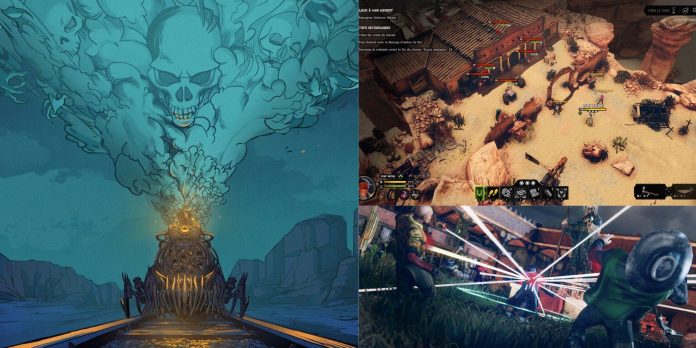 There has been an abundance of supernatural Western video games in 2022. There was Weird West which was released on March 31st, Evil West which is due in mid-September, and released in between those two games is Hard West 2. The only member of that trio that is also a sequel, Hard West 2 is a follow-up to the first Hard West game which was released back in 2015. It’s also the most traditional RPG of the three, employing a turn-based strategy component to its action that also cranks up the game’s difficulty.

In Hard West 2, players take on the role of a gang of outlaws as they chase down a mysterious ghost train across the American Midwest. Witchcraft, devil worship, and other supernatural forces are more than happy to stand in their way. True to its name, Hard West 2 is, well, hard. There are a lot of systems at work, and a few missteps can see an entire posse gunned down in an instant. Here are the most essential tips for getting a handle on this version of the Wild West.

Action Points (AP) are Hard West 2’s method of determining the length of a player’s turn. Every action taken in combat costs AP, and every character begins their turn with 3 AP, represented by three stars located below their health bar. Moving costs 1 AP, shooting a pistol or shotgun costs 2 AP, shooting a rifle costs 3 AP, and so on. It’s not unlike the system employed in the Divinity: Original Sin series. When a character runs out of AP, their turn is over.

The twist here is what’s known as the Bravado system. When a character kills an enemy, their AP is refilled, allowing them to take more actions. This encourages a more aggressive style of play. A well-planned attack can see one character tear a swath through the enemy ranks in short order. This system is in place to discourage over-reliance on cover, so don’t be afraid to step out into the open and start blasting.

In any Western story, luck plays a large part in determining how long an outlaw survives, and things are no different in Hard West 2. A character’s luck will accumulate whenever they miss a shot or take damage, and can then be spent to tilt a battle in their favor.

For example, Luck can be used to guarantee that a low-percentage shot will still find its target. Higher luck also increases the odds that an enemy will miss their shots. Be cautious though, an empty Luck meter means that an enemy can hit that character from anywhere, even when they’re behind cover.

8 Maintain A Stock Of Healing Items

This may seem self-explanatory, but healing items are far more essential in Hard West 2 than in the average RPG. There are no healer characters that can be added to the posse, and health does not replenish after a battle or a completed mission.

As such, the only way to ensure survival is to maintain a healthy stock of every healing item available. Whiskey, food, and bandages will all restore a certain amount of health. They can be purchased in towns and found around the environment. Try to keep as many on-hand as possible.

7 Talk To Every Member Of The Posse

As with many tactical RPGs, players will have access to a group of characters during their adventures that together make up their party; or in this case, their posse. There are a total of playable six characters in the game, each with their own unique abilities and combat styles.

When resting at their campsite, players can take a moment to chat with the members of their posse. Doing so will increase that character’s Loyalty level, which in turn unlocks that character’s backstory, as well as certain abilities and dialogue options. Characters will only unlock additional dialogue at a certain Loyalty level, so it’s best to chat with all of them whenever the opportunity arises.

One way that Hard West 2 differentiates itself from other tactical RPGs is a complete lack of any leveling-up system. Characters don’t gain experience or improve their stats via level increases. Instead, they become stronger by equipping better weapons, gear, perks, and trinkets, and through effective use of the Card system.

Each character has an Inventory page and a Cards page. Cards are unlocked as players progress through the game, and each Card provides a certain stat bonus. On top of that, on the left of the Cards page is a list of Traits that are unique to each character. Traits can be unlocked by having a particular combination of Cards in that character’s Hand, such as a Pair or Three-Of-A-Kind. While Traits are exclusive to each character, Cards are shared by everybody, so make sure to apply Cards effectively across the posse, and don’t let valuable Cards sit unused in the Hand of someone not currently in the posse.

While exploring the world of Hard West 2, players will run into obstacles that need to be cleared in order to access the loot hidden behind them. Clearing these barriers can be done in classic cowboy style with either a Pickaxe or a stick of Dynamite.

RELATED: Best Games With Supernatural Creatures (According To Metacritic)

The Pickaxe is easy enough to get a hold of: simply buy it at the General Store in town (and don’t accidentally remove it from the inventory), and replace it whenever it breaks. Dynamite, on the other hand, also doubles as the game’s grenades. Sticks of Dynamite can be extremely useful in combat for clearing groups of enemies, but it’s important to not drain a character’s inventory stock just to kill a few baddies. Using the Pickaxe or Dynamite to clear obstacles will grant different rewards, so keep both options open.

4 Review (And Complete) Side Objectives

Before entering any combat scenario, players can review the objectives of the encounter. There is the Main Objective – usually just to clear out the enemies in the area – as well as one or more Side Objectives.

Side Objectives are more like challenges than added mission content, but they do come with additional rewards. These rewards can be as simple as some extra cash, or as valuable as rare gear and weapons. Even at their most basic, these Objectives are worth completing just for the extra rewards they provide, and occasionally they’ll grant some top-quality loot.

For veterans of the tactical RPG genre, this will come as second nature, but for those new to this style of video game, it may take some getting used to. Much like in games such as XCOM or Divinity: Original Sin, players who get caught with their party all grouped in one position will be opening themselves up to a quick defeat.

The rule of thumb for any combat encounter is to spread out all the members of the party so that they can take advantage of multiple angles of attack. There should always be one character who is flanking the enemy, one who is providing covering fire, one who is drawing enemy aggro, and so on. Players should experiment to decide which character suits which role best, and then approach combat accordingly.

As with many RPGs, General Stores will improve their stock of available purchases as players progress through the game. While returning for these items has obvious benefits (such as stocking up on Dynamite and healing items for reasons mentioned earlier), it’s also worth checking back in at Stores to see if they’ve got any quest items for sale.

RELATED: Greatest Westerns Ever Made

These items do not immediately benefit the posse, but they can unlock previously inaccessible areas of the map. At worst, this will grant players more loot and gear to improve their posse. At best, these areas can increase the Loyalty of certain characters in the posse. In either case, buying these quest items when they become available is always worthwhile.

In between encounters and exploration, players will move their posse around the game via an overworld map. Exploring the map is important for finding hidden areas and items that may not be labeled automatically. However, moving around the map can be tediously slow-going on the default setting.

To help improve this, simply increase the game speed via a setting located in the top right corner of the map screen, which is depicted as a stopwatch with a number in the middle. Gameplay speed can be set to 2x or 4x faster, and it’s worth experimenting with both to see which speed is most comfortable.

Hard West 2 is available on PC.