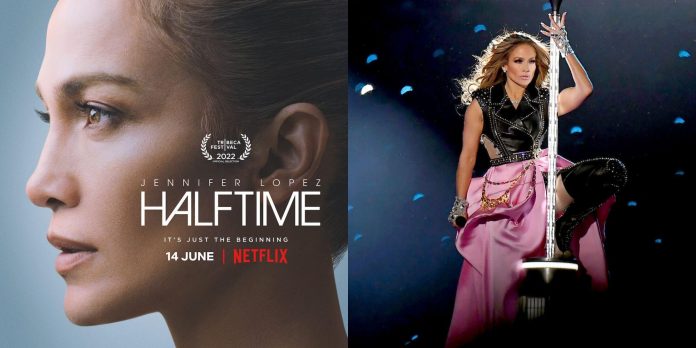 For decades, Jennifer Lopez has been one of Hollywood’s most hard-working and versatile entertainers. A singer, actress, dancer, producer and entrepreneur, Lopez has built a small empire, turning her name into a successful brand.

Netflix’s Halftime documentary provides an insight into her life and career at a very particular time, as she promoted the film Hustlers and received the best reviews of her acting career while preparing her now iconic Super Bowl halftime show alongside Shakira. The documentary reveals new details about Lopez’s path and ambitions, allowing audiences to see a new side to her persona.

J.Lo Was Always The Dancer

Lopez opens Halftime talking about her childhood. She mentions how, as a kid, people would refer to her as “the dancer.” Her other sisters were “the intelligent one” and “the singer,” leaving her as the dancer. Lopez even mentions how she felt “she wasn’t smart or could sing.”

This revelation is telling, especially because Lopez reveals she didn’t have an easy relationship with her mother. It’s also somewhat sad, considering Lopez’s career began as a dancer, and she struggled to be taken seriously as a singer despite countless hits.

J.Lo Was Very Aware Of Her Oscar Buzz

Jennifer Lopez has a successful film career, starring in over forty pictures. However, it’s not an overstatement to say that her role in Hustlers is her all-time best. As Ramona, Lopez is confident, dominating the screen in every scene she’s in and displaying a maturity that viewers were not expecting.

Logically, Lopez earned rave reviews, including wins from the Los Angeles Film Critics Circle and nominations for the Golden Globes and SAG Awards. Lopez was very aware of the Oscar buzz surrounding her performance, and Halftime follows her awards campaign, showing how much the nomination meant to her.

During one of the most telling moments in the documentary, J. Lo mentions she isn’t a political person, and a clip plays of an interview where she laughs off the idea of making a political statement. However, Lopez then reveals she felt obliged to have her halftime show take a strong stance against the anti-immigration and anti-Latino sentiment in the U.S. during Donald Trump’s presidency.

Lopez was a notorious figure, mainly because of her personal life, which frustrates her, as she reveals during Halftime. However, she remained largely away from politics for much of her early 2000s career, only feeling compelled to use her platform following the 2016 presidential election.

Perhaps the most infamous moment of Halftime occurs when Lopez complains about the idea of having two headliners in the Super Bowl. Calling it “the worst idea in the world,” Lopez laments the lack of time she’ll get to sing her message.

Her team also complains about the decision, taking it as an insult and suggesting the NFL didn’t trust one Latina could do the job alone. The comments aren’t against Shakira, but the quote can easily be taken out of context and make it sound like an insult against the Colombian superstar.

J.Lo Wanted To Sing At The Halftime Show

Jennifer Lopez has a successful singing career. She even acted as one of the best judges on American Idol, cementing her place as one of the most versatile entertainers in the new millennium. However, critics and audiences haven’t always been supportive of her singing. Lopez herself had doubts about her singing abilities.

Because of her desire to prove herself, Lopez wanted her halftime show to feature some actual singing, not just dancing. At one point, she mentions she wants to do something with “substance” and not just “shaking our a**es and f*ucking belly dancing.” The comments were logically controversial, as they come across as insensitive towards Shakira.

Lorene Scafaria’s now-iconic film Hustlers was a before and after in Jennifer Lopez’s career. The actress received the best reviews of her career and the respect she had always longed for from her peers. The film was also a massive box office success, grossing $157 million worldwide.

Logically, Lopez wanted to incorporate some elements of her highly-physical performance into her halftime show, especially because her chances of securing the Oscar nomination seemed at an all-time high. Lopez’s brief moment of pole dancing at the halftime show caused a storm on the internet, but it was a clear and loud acknowledgment of her work in Hustlers.

J.Lo Wanted Bruce Springsteen To Cameo In The Halftime Show

From the very beginning, Lopez wanted to incorporate Bruce Springsteen’s anthem “Born in the USA” in her halftime show. However, Lopez had trouble convincing Shakira. After all, Shakira wasn’t born in the USA and is quite proud of her Colombian heritage.

Lopez reveals during Halftime that she planned to have Springsteen cameo in the show. However, she changed her mind and decided it would be better to have her daughter, Emme, sing the song. Springsteen is an icon whose music has been featured in countless films, and his presence would’ve been a pleasant surprise. However, having Emme sing the song was arguably a more powerful moment and more effective statement.

J.Lo And Her Team Took The Golden Globe Loss Hard

Lopez followed the reviews for Hustlers closely, at one point even crying while reading one. She and her team particularly celebrated her Golden Globe nomination. At one point, it seemed like she was the frontrunner for the award. The Globes love recognizing superstars, and there was no clear favorite in the category.

Alas, the Hollywood Foreign Press ultimately gave the award to Hollywood royalty Laura Dern, who went on to win the Oscar. Lopez and her team took the loss particularly hard. She later reveals she felt like she let everybody down by losing.

On the night before the Oscar nominations, Lopez revealed she dreamt that she received the coveted nomination. She then woke up and realized it had been a dream. To make matters worse, she checked her phone and saw messages from her team confirming the Academy had snubbed her.

RELATED: Where Else You’ve Seen The Cast Of Shotgun Wedding

Lopez’s lack of a nomination for Hustlers remains one of the most egregious snubs in Oscar history. Lopez received multiple nominations from critics’ associations and made it to the Globes and SAG Awards. Her absence from the Oscars was strange and, quite frankly, unfair.

J.Lo Wanted Her Performance To Have A Message

Halftime chronicles Lopez’s experience planning her halftime show. The process involved considerable fighting with the NFL, and Lopez at one point describes the whole thing as a “nightmare.” The NFL particularly took issue with the use of glowing “cages,” and Lopez had an intense argument with the organization’s representative.

Lopez wanted to have the cages to send a political message and remained staunchly committed to keeping them, even when the NFL bluntly told her she couldn’t. Lopez states several times during Halftime that she’s been fighting her whole life to be heard, and the documentary confirms that, showing her as a strong and determined businesswoman who never takes no for an answer.

Xbox and Bethesda Games Showcase 2022: All announced and revealed