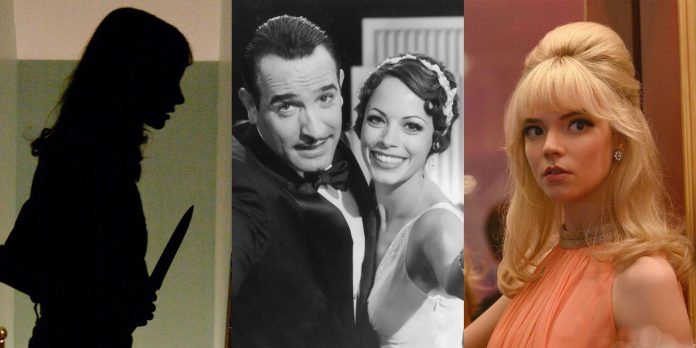 Top Gun: Maverick recently evoked the 80s aesthetics from the first film nostalgically and compellingly, but didn’t hide the influence of the present days by bringing up matters such as automation and technological parity. Some movies aim at transporting viewers right back to the past by presenting an old-fashioned narrative either through the production design, the cinematography, or the editing.

In these cases, the movies want to portray a very specific situation or period that calls for an immersive experience. It’s not only about shooting in black-and-white but instead manipulating old techniques or using creative choices to look purposefully antiquated.

The wicked and energetic Last Night in Soho is Edgar Wright’s homage to classic Giallo (Italian art-house slashers), using vibrant red and blue lights to contrast present-day London with its mysterious past until it all collides. The film tells the story of an aspiring fashion designer who is mysteriously able to enter the 1960s through the eyes of a stunning wannabe singer.  When the past unravels as something not as glamorous as she anticipated, the dreamlike fantasy turns into an absolute nightmare.

Related: 10 Dream-Based Horror Films That Will Give You Nightmares

The first half of the movie is all about the aesthetics but when Last Night in Soho finally deep dives into horror, the use of typical Giallo conventions blends beautifully with the mystery and gives the narrative a very compelling, old-fashioned tone, in a way even the moments set in the present feel like the London from the 60s.

One of the most disturbing movies of the last few years, The Golden Glove is a German film about Fritz Honka, a real-life serial killer who terrorized the streets of Hamburg back in the 1970s. The movie is an immersive experience, diving into Honka’s life as he brutally preys on poor women and stocks their bodies in his flat’s attic.

The Golden Glove’s production design is so attentive that viewers can almost feel the putrid smell of Honka’s decaying apartment. Beyond that, it’s an accurate portrayal of Hamburg in the 70s as the narrative goes over the life and traditions of the lower classes back then, through the eyes of a self-destructing psychopath.

The Souvenir is Joanna Hogg’s semi-autobiographical masterpiece, so she wanted to make sure everything looked exactly like she remembered. Through the lens of David Raedeker, 80s London is presented in a dream-like, antiquated fashion, as a shy film student struggles to balance her ambitious career with an emotionally fraught relationship with a peculiar older man.

The movie settings are fabulous and the biggest highlight within the two parallel narratives that take place in The Souvenir: the frantic relationship between the film student and her lover, and her hurried efforts to keep up with college. With hints of metalanguage, the movie does an amazing job of making viewers feel like they’re witnessing those times alongside the main character.

The Love Witch is the kind of movie that fully commits to the bit: in a tribute to the 1960s horror films, it displays the brilliant use of hard lighting to evoke the 60s aesthetics. To manipulate the image even further, the movie was shot on 35mm film and had prints struck right off the negative, giving the colors a perfect old-fashioned look.

The movie tells the story of a contemporary witch who uses her spells to get men to fall in love with her, with deadly consequences. While the story is quite interesting, the visuals are what makes  The Love Witch stand out in modern horror conventions, and the use of the color red is stunning.

The latest Ti West film plays with typical slasher tropes and pays homage to low-budget horror classics such as Texas Chainsaw Massacre and The Hills Have Eyes. In the movie, a group of young filmmakers set out to make an adult film in rural Texas, on a property owned by an elderly couple that harbors dark desires.

Leading up to the typical slasher bloodshed, the film brings viewers closer to its 70s feel with a great build-up. X also displays the shooting that takes place within the movie in an antiquated fashion, with editing techniques that reminisces the aspects of amateur low-budget movies from the last century.

Béla Tarr is an acclaimed Bulgarian director known for his subversive films, including the 7h30 hours long Sátántangó. The Turin Horse offers his revolutionary trademarks once again, in a movie that feels like it got stuck in time decades ago.

Set in the 19th century, The Turin Horse follows a poor farmer and his daughter as a mighty windstorm and an abused horse’s refusal to work mark the collapse of their melancholic routine. A philosophical study on the eternal return of existence, the black-and-white cinematography and minimalist setting imprison viewers in that hopeless lapse of time. It’s the kind of movie that could easily have been released in the silent era but would only work if accompanied by an orchestra playing the haunting soundtrack Tarr used.

If there’s one director who knows how to handle time is Richard Linklater, and Everybody Wants Some!! transports viewers back to the burning summer of 1980, in Texas. In a plotless narrative, the film is a huge hangout with a group of freshmen and their veterans from the baseball team as they get ready for the start of a new college semester.

Unaffected by the present, the movie doesn’t even follow typical tropes from recent movies set in the 80s. The main objective is simply to capture the essence of those times, and it does it quite well with its old-fashioned story and the bygone set of characters.

One of the best movies of 2021, this Oscar-nominated movie by Paul Thomas Anderson is his take on the 70s gracefulness that was so impactful in his childhood. With clear references to George Lucas’ American Graffiti, Licorice Pizza presents characters growing up, falling in love, and (especially) running around in California’s San Fernando Valley back in the early 70s.

The movie’s chaotic, yet casual events portray both fictional and real-life characters. Even one of the protagonists, Gary Valentine, is based on the American film and TV producer Gary Goetzman. Among other popular figures from the 70s in the film include Jon Peters and Joel Wachs. Licorice Pizza also offers important historical contexts such as the gas crises that caused havoc in California back then.

This lesser-known horror movie by Ti West brings back conventional 80s conventions to set up a slow-burn narrative that payoffs in the hard-hitting final moments of the film. Set in 1983, The House of the Devil follows a young college student who accepts a suspicious babysitting job on the night of a full lunar eclipse.

The slow-moving camera work adds up to the movie’s unsettling atmosphere and the mysterious hints that something bad is about to happen. The film pays a lot of attention to its ambiance, as the protagonist starts to suspect her clients are hiding something terrible from her. For most of the time, the character’s interaction with the environment and objects around her is what drives the narrative to its clímax.

This Oscar best picture winner isn’t subtle in the homage it pays to classical cinema. With black and white cinematography and almost entirely silent, The Artist tells the story of a silent movie star worried about whether or not the arrival of talking pictures will take away his stardom. In the Hollywood of 1927, he develops a relationship with a young dancer set for a big break.

The heart-warming romance fits beautifully in the drama of remarkable stars giving space to a new era of cinema, in a way the enchanting narrative doesn’t fall into only nostalgic appeal. It evokes the majestic art of silent movies while also delivering a compelling story worth telling.

Ben Affleck prepares for Jennifer Lopez’s wedding in the bathroom of...