Home Entertainment 10 Quotes that Prove that Harley Quinn and Poison Ivy Have the... 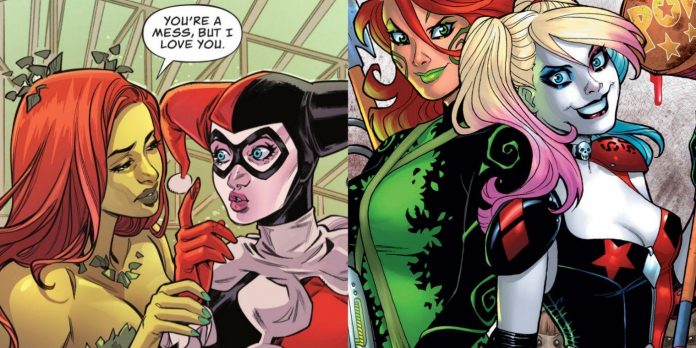 Harley Quinn and Poison Ivy have a strong relationship anytime they are in media, which could not be more apt in the Harley Quinn animated series, which has just premiered its third season. While their friendship began in Batman: The Animated Series, they moved to the pages of DC Comics for many more adventures. The friendship the two built with each other over the years is a strong foundation for the romantic relationship that blossomed between them.

“Who am I kiddin’? I could never stay mad at Red for too long!”

In Batman Adventures volume 2 #3, “Breathing Room,” Harley, who is not afraid to hold grudges, admits she can never stay mad at Ivy.

When Harley finds herself in Gotham Penitentiary, she is nervous and still upset at Ivy for keeping a secret from her. However, all that anger is gone the second she sees Ivy. Achieving this level of forgiveness with Harley shows the strength of their friendship and how much she values Ivy in one of their earliest comic book adventures.

When Red Tool gives her no information to Ivy other than he needs her help to save Harley, she immediately agrees in Harley Quinn vol. 3 #23. Ivy is willing to do anything for Harley without question.

Ivy’s use of the nickname “Sweet Pea” further shows how much she values Harley. One awesome part of Harley and Ivy’s relationship is how Harley thawed Ivy’s cold exterior. Ivy now values a human’s life nearly as much as plants’ to the point that she uses nicknames that closer relates Harley to her beloved plants.

“I’ve never had this support, Harls. Not in the way you’ve given me.”

The companion comic to Harley Quinn The Animated Series, The Eat. Bang! Kill. Tour #6 reveals Ivy has never felt as supported by anyone or anything as she has Harley.

Ivy is going through a lot after her wedding to Kite Man was canceled because of her feelings for Harley. As much as Ivy wants to be with her and loves the support, she is still processing everything that happened and needs Harley to be patient with her, only making their relationship stronger through her vulnerability and honesty.

“You are my best friend in the world…no buts. You are.”

For Poison Ivy, nobody else comes close to the level of friendship she has with Harley, and she makes that clear in Harley Quinn volume 3 #8.

Related: The 10 Best DC Comics Animated Shows, According To Ranker

Ivy and Harley’s relationship is unconditional. No matter what they do or how little they may think of themselves at a particular moment, nothing changes how they feel about each other. Even when they are romantically involved, their friendship is only made stronger and remains without “buts.”

“I guess it’s just my little touchstone to you.”

In Batman #103, released in 2020, Harley talks to a batch of poison ivy she found in a park, so she talks to it to feel closer to Ivy. Harley’s ability to feel close to Ivy even in her absence is one of the many reasons their relationship is the real deal.

Harley knows she struggles to keep plants alive, but that does not matter because feeling close to Ivy is worth trying to figure out how to care for a plant properly.

Ivy feels alone and like plants are growing unwilling to work with her in Harley Quinn and Poison Ivy #5 when Harley reassures her that she will always be by her side.

Harley does not spend time with Ivy for her abilities. She is with Ivy for who she is, making them forever considered one of the best friendships in all of DC Comics. When Ivy feels down, Harley, without fail, is there to give her an optimistic view of the situation and remind her that she will never be alone in anything.

“You need to find your own path, too…because I love you.”

In Harley Quinn #10 (2021), Harley supports Ivy in finding her own path as Ivy did for her. However, because Harley loves Ivy, she realizes Ivy should go on this journey as an individual.

As two of DC Comics’ strongest female characters, they understand the need to support each other, even if it is difficult. If it is best for them to be apart, they have a relationship that can handle the distance because when the time is right, they will come back together as if no time has passed.

“Any moment you feel you need me… I will be there quicker than The Flash.”

In Harley Quinn volume 3, “Kiss Kiss Bang Stab,” Ivy tells Harley that she would be faster than The Flash himself if Harley needed her help.

While Ivy knows Harley can handle herself in dangerous situations, Ivy still lets her know that she will drop anything if Harley needs backup. Individually, they are solid and capable, but together they are better and able to get out of any situation with their combined talents. Their relationship is not only a close friendship or a romantic relationship, they are also teammates.

“I wanna find ya earlier, Ivy.”

In Love is a Battlefield #1, Harley tells Ivy that even after all the time they spend together, she wants more and wants to find her even earlier in the next life. Harley and Ivy could never have enough time together.

Finding Ivy sooner would allow Harley to avoid her experiences with the Joker, which make her one of DC Comics’ most sympathetic villains. With Ivy, Harley could have found herself on her anti-hero or hero journey before going full villain.

“You will wake up tomorrow…because she’d never forgive me if you didn’t.”

In Injustice: Year Zero #8, Poison Ivy puts Harley’s desires before her own as she wraps Joker in vines and threatens him for everything he put Harley through in the past and present.

Ivy would have no issue destroying Joker, but because she thinks that is the one thing Harley could never forgive, Ivy does not even risk it. While Ivy is not protecting Harley with her powers the way she wishes, she watches over her in a way that respects Harley.

The 10 best characters who debuted in the comics about Doctor...