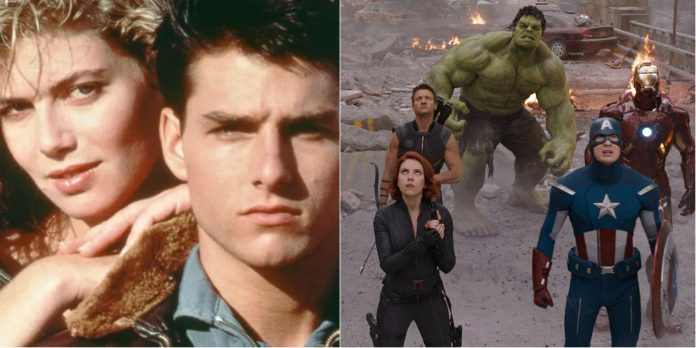 Top Gun: Maverick’s recent release and subsequent success have proven that there is still a huge market for fan-favorite classics.  However, not all popular films of the past are universally loved. There are many films out there that have been critically acclaimed and dotted on by the masses that leave some people completely unimpressed.

Whether it be the last Harry Potter film’s disappointing delivery or the audio quality of The Batman, there are many elements in popular films that Redditors simply cannot grow to love.

The first Top Gun film was a commercial success, due to the amalgamation of its impeccable casting, exciting action scenes, impressive soundtrack, and charming story elements. The popularity and success of the film are largely what prompted the release of its sequel 36 years later, but not everyone was eagerly awaiting it.

Related: 10 Actors Who Play The Same Character In Every Film, According to Reddit

Redditor moviessuck acknowledged Top Gun’s influence but remained unimpressed with the film, stating: “It never did anything for me. But I understand that along with Flashdance and Beverly Hills Cop, it ushered in an era of high octane “MTV/Bruckheimer style” of blockbuster that dominated the 80s and 90s and has influenced blockbuster filmmaking to this day. As well as setting a new standard for military involvement in high budget filmmaking.”

2001: A Space Odyssey was considered to be one of the best sci-fi films of its time, containing some of the best quotes in Stanley Kubrick movies. Although there are quite a few things the film got wrong about the future, the on-screen adaptation of Arthur C. Clarke’s text is still admired for its gripping narrative and ambitious special effects. However, not everyone loved the widely praised scenes of the film.

Reddit user SamWinchester1974 said they “LOVE outer space…I just can’t stand the 20-minute intro with the apes and many other scenes are just completely dragged out. There were probably only 2 or 3 scenes I enjoyed. I wanted to like this movie but just could not get into it.”

Inspired by Joseph Conrad’s dark and now widely critiqued tale, Heart of Darkness, Apocalypse Now tells the tale of Captain Willard who is tasked to bring the demise of Colonel Kurtz, who is hiding in the depths of Cambodia on a renegade mission of his own. Set during the Vietnam War, the film is applauded for its commentary on the workings of war and the human condition. Despite its significance, the movie did not impress all of its viewers.

Redditor CartoonBeardy explained that they “admire the film making, I get the history of it. But I find it just too “bitty” … It just seems like a portmanteau of random moments saying “war is nuts” over and over and eventually just ends. Like I say, I admire it and the Herculean task of getting it produced but as a film to watch I just can’t engage with it.”

Widely regarded as one of the best gangster movies of the 2000s, The Departed was a huge success upon release, receiving immense acclaim from fans, critics, and award committees alike. The film thrived on its ensemble cast, fast-paced storytelling, and memorable dialogues. But its charm did not work on the entirety of its audience.

It took Reddit user JurassicNublar a few times to eventually get through the whole film: “After the 4th try, I finally watched the whole thing. I honestly don’t know what it was, I liked the actors, I like the director, I like the genre, but something about that film just didn’t grab me.”

Star Wars has become one of the most widely expanded, profitable, and famous movie franchises of time. The original trilogy especially is noted for paving the series’ success and is lauded for notable achievements such as its introduction of complex characters, impressive world-building, use of effects, and impactful soundtrack. But even this series is prone to its criticisms.

Related: 10 Good Films Ruined By A Bad Third Act, According To Reddit

Redditor LearnHumility noted how they liked Han “but everything else is meh. The action is slow, the acting other than Ford is hit and miss, and the costume designs just don’t look that good imo. The story is pretty good but you have things like Leia being a Skywalker which goes nowhere and Luke comes across like a Gary Stu. He barely trains yet in the 3rd movie he’s like this all-powerful Jedi.”

The newest adaptation of the Caped Crusader has been making waves in the industry, with many praising its plot and direction, the performances of Robert Pattinson and Zoe Kravitz, and the overall darker ambiance of the film. While the film has been constantly compared to its predecessor Batman adaptations, The Batman has proven its worth and has many fans awaiting its next installment.

Despite being one of the highest-grossing films of this year and its many notable qualities, not all viewers were impressed. Redditor C_TheQBee was not as won over by the film: “Tried 3 times to watch it. Seemed mostly Robert Pattinson posing sometimes in the suit sometimes not. Dialog too low… I just couldn’t slog through it.”

Before there was Doctor Strange in the Multiverse of Madness’s depiction of dream walking, there was Christopher Nolan’s Inception. Featuring a star-studded cast, intriguing concept, and captivating story-telling, the film was destined to perform well and exceeded the expectations of most viewers – but not all.

Related: 10 Disney Movies That Fans Would Love As A Live-Action Film, According to Reddit

Reddit user NeatHedgehog thinks “they really underutilized the whole dream idea… aside from being a framing device it didn’t amount to much. All kinds of crazy, absurd stuff happen in dreams, but instead, they go for the most mundane, straightforward, real-life / action-movie style dreams? I mean, that’s what the movie was, so it makes sense from that standpoint, I guess. Just seems like they could have done more.”

One of Audrey Hepburn’s most memorable performances was her portrayal of Holly Golightly in Breakfast at Tiffany’s. Apart from Audrey’s acting, the film is remembered for noteworthy elements such as its use of fashion and depiction of Holly’s suffering amongst the New York elite and powerful.

The film has since become a classic with many renowned elements, such as having one of the most iconic pieces of eyewear in movie history, but is not unanimously adored. Redditor BlueHighwindz thought that “The plot was all over the place, it never seemed to go anywhere. I just faded out over and over while watching. It was one of those movies that make you really want to check your Twitter feed.”

The acclaim received by the Harry Potter book series ensured that the film adaptations would also receive just as much fame and prosperity, and the newly released Fantastic Beasts: the Secrets of Dumbledore proves this profitable legacy. However, fans of the books were disappointed with many of the best quotes and scenes being omitted from the releases, with some even openly despising the film series.

Reddit user newb0rn11 hates the last film of the series in particular: “I thought it was a poor way to end the series. There was very little payoff in the final duel between Harry and Voldemort, and some of the biggest parts of the book were skimmed over to make way for bigger explosions.”

For the past decade, the MCU has dominated much of the film industry’s most-awaited films list; now, the franchise is also slowly taking over the small screen with Disney+’s ever-growing roster of MCU series. Of course, this rise to prominence began back in Phase one with the team that started it all: The Avengers. Despite their immense popularity, the MCU films are not for everyone, and The Avengers especially has been criticized by many viewers.

Redditor peachy-mean stated that “it had a charismatic cast and a few good lines (which were then beat into the ground by the sudden explosion of Avengers fandom) but that was basically it. Everything else about it seemed unoriginal, rushed, and predictable.”