Home Entertainment 10 One-sequel Movies That Deserve a Trilogy, According to Reddit 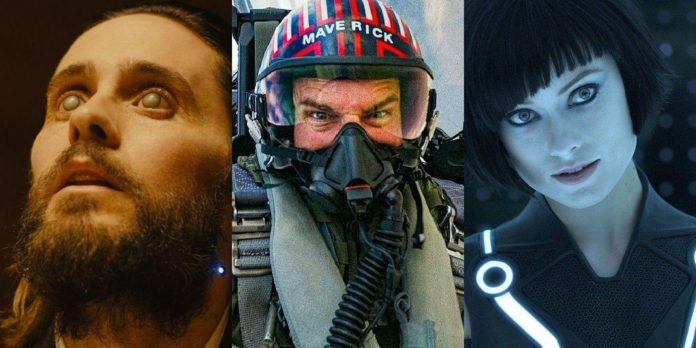 The Guardians of the Galaxy is one of the most entertaining series in the Marvel Cinematic Universe, and Chris Prat has just opened up about the emotional ending of Volume 3. By the time Guardians Volume 3 is released, it’ll be the sixth series in the MCU to become a trilogy, and it’ll be far from the last in the franchise to pull that off too.

But not every movie series gets that privilege, and there are tons of great two-movie series that deserve a third film. Redditors have vouched for so many series to get the trilogy treatment, and whether they’ll ever happen or not, the users make some great arguments.

Redditor Lucia-pacciola wants to see the Top Gun series rounded out with a threequel. After the success of Top Gun: Maverick, there must be talks amongst studio heads at Paramount about a potential sequel. The newly released movie massively overperformed at the box office, making over $1 billion worldwide.

RELATED: Top Gun – Maverick & 9 Other Films Guaranteed To Give You An Adrenaline Rush

Maverick could be a passing of the torch, as the threequel could follow Rooster (Miles Teller), who was introduced in the sequel and quickly became a fan favorite. Teller himself has spoken about a potential sequel. The actor explained that he has spoken to Tom Cruise about a potential follow-up, simply noting, “I’ve been having some conversations with him about it. We’ll see.”

Where John Wick popularized gun-fu in Hollywood, 2011’s The Raid nailed it three years earlier. The movie and its sequel are some of the most impressively violent action movies of the 2010s, and K9sbiggestfan wants to see a third installment. The Redditor admits, “There isn’t an obvious need for a third, it’s just the first two are so good and I want more.”

According to Looper, director Gareth Evans refused to make a threequel, explaining “I couldn’t see myself going back out to make The Raid 3. My interests had moved on to other projects.” However, fans of the series haven’t seen the end of the franchise. It might not be another sequel, but a remake of the original movie is in development with Michael Bay producing.

User OhAnonymousOne points to the Nicolas Cage-led Indian Jones-lite series, National Treasure. The Redditor deduces, “I still have a tiny bit of hope since Hollywood keeps going back to old franchises.” Fans have wanted a threequel to the series for well over a decade at this point, as there’s no current franchise like it, and Book of Secrets was released over 15 years ago.

The action and adventure in the movie are so much fun, but, unfortunately, Cage himself told Redditors he is no longer involved in the series. A National Treasure Disney+ series is in production, but it might not be the same without Benjamin Franklin Gates leading the adventure.

Redditor Inner-Job-2087 wants to see Tron 3, and even explains that it has been in development. The Redditor notes, “They are making a new Tron with Jared Leto. I would love if it was a sequel but I read it’s more like a reboot.” However, the actor has been attached to the project for five years, and even Leto’s recent comments about Tron 3 hint that very little progress has actually been made. As there were 28 years between the first movie and the follow-up, Tron: Legacy, there could be a sequel to the 2010 movie, but fans could be waiting another couple of decades for it.

However, even then, it’s still massively unlikely, as the franchise has now underperformed twice. Not only did the original film struggle at the box office, but Tron: Legacy didn’t do the numbers that Disney wanted either. To invest another couple hundred million dollars in a franchise that hasn’t once been successful isn’t exactly a smart financial decision.

While Arnold Schwarzenegger is best known for playing the T800 in The Terminator or Johnny Matrix in Commando, his best and most believable acting was in Conan the Barbarian and its sequel, Conan the Destroyer. Damienkarras1973 wants a threequel more than anyone else, exclaiming, “King Conan!”

A third movie had been in development for years, even as recently as in the 2000s. It’s one of the many unrealized Wachowski projects, and it had the title, King Conan: Crown of Iron. Even though it has been 40 years since the original movie, there could still be a great legacy sequel considering Schwarzenegger is still in great shape, and it could be a gritty Logan-like swan song.

It’s hard to believe that 21 Jump Street turned 10 in 2022, as it still feels so recent. That could be because the film was so influential in its self-awareness and meta-comedy that the approach is still so popular today. However, it has been eight years since 22 Jump Street, and the film was so successful that it comes as a shock that a third movie never arrived. Ok-bookkeeper-3999 is more surprised than anyone, asking, “Seriously, how did this not happen?”

Another sequel could ruin the gag at the end of the second movie, which essentially jokes that all franchises are run into the ground, as literally dozens of sequels and even tie-in video games are hinted at. But there’s just so much potential for the series to continue. There were plans for a Jump Street/Men In Black crossover movie, which is too perfect to waste.

The original Wayne’s World was such a huge success that there was such a quick turnaround on the sequel, which was released just one year later. But there’s been nothing but radio silence regarding the franchise for almost 30 years. Mike Myers has hinted at an Austin Powers fourquel, but Ho7mes would rather see the Wayne’s World series get rounded out with a trilogy. The Redditor comments, “I’d like to see a Wayne’s World 3. 1 and 2 still hold up.”

Given that the music landscape has drastically changed in the 30 years since the original movie, there are so many easy jokes to make that the threequel almost writes itself. Whether it’s commenting on the way music is consumed through streaming services, the way MTV is more about reality shows than music videos, or popular music itself, Wayne and Garth’s take on it all could be hilarious and even insightful.

Reddit user AgentUpright wants to see Antonio Banderas reprise his role of Zorro for a final movie, making the series a trilogy. The Redditor has an interesting elevator pitch for the final movie in the trilogy, positing, “I’d love to see a follow-up of Mask of Zorro and Legend of Zorro with Banderas as a Dark Knight Returns-style older Zorro that comes out of retirement to deal with something.”

The character did come close to getting a third outing, but it was a much more unorthodox approach. Quentin Tarantino had planned to make the crossover movie Zorro and Django, which would have seen the two characters work together as bounty hunters. The celebrated director even pitched it to Banderas, who was totally on board. It’s a fantastic idea, and the reason it was canned was that, according to co-writer Jerrod Carmichael, the movie would have cost $500 million to make.

Redditor Appropriate_Focus402 wants to see the third movie in the Jim Carrey-led slapstick comedy series, Ace Ventura. The Redditor even gives the hypothetical threequel a title, Ace Ventura 3: Ace’s Last Stand. Given that Carrey’s brand of comedy is as popular as ever thanks to him playing Dr. Robotnik in the Sonic the Hedgehog movies, it’s a surprise that there hasn’t been any word on some sort of legacy sequel.

But if fans take Carrey’s word for it, the actor is retiring from movies for good. That means that not only will there be no Ace Ventura 3, but he won’t return as the Eggman for Sonic the Hedgehog 3 either. However, actors never keep their word when they announce retirement plans, and even Cameron Diaz is returning this year after announcing her retirement in 2014.

User The-Mandalorian wants to see a third film in the Blade Runner series. The Redditor makes a great point that Blade Runner 2049 teased so much more story, noting, “You can clearly tell plot points in Blade Runner 2049 were set up for a 3rd film (Wallace is still around, and the Resistance was hinted at).”

However, just like the Tron franchise, the Blade Runner series is zero-for-two when it comes to box office performance. Both movies are considered box office bombs, but as the two films come with enormous amounts of prestige and have a large fanbase, it could still happen. The sci-fi series could have a perfect final movie in a trilogy, as it could culminate in an epic final battle between the resistance and the humans.

Prepare the portfolio: see the main releases of the 2nd semester