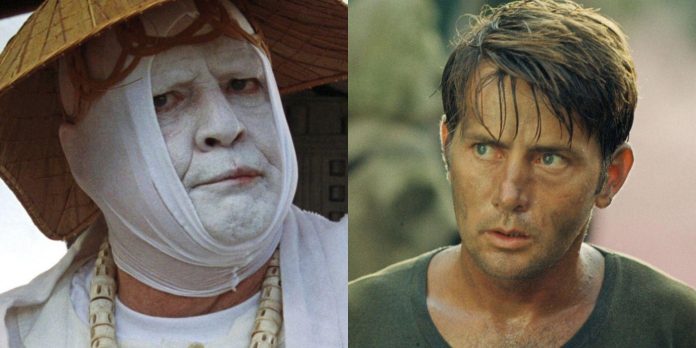 Recently, the controversy surrounding Zack Snyder and his attempts to make Justice League for Warner Bros. resurfaced. Today, more people are talking about the movie’s off-screen drama than the movie itself. Making movies require a lot of people working together to make it work. When some of the people stop getting along, that can cause problems that can hurt a movie.

But this is nothing new. Hollywood has been full of strong personalities for years, and when they get together, it can cause explosive fireworks behind the scenes. This off-screen drama has often somehow resulted in some of classic Hollywood’s best movies, although in some cases, the movies crashed and burned in the aftermath of the battles.

Chinatown has a place in movie history as one of the best screenplays ever written. The movie is a film noir with Jack Nicholson starring as a private investigator looking into a case of adultery, only to get swept into political corruption, deceit, and murder. The off-screen drama was almost as interesting.

Roman Polanski directed the movie and he reportedly spent the entire Chinatown shoot fighting with star actress Faye Dunaway during filming. There was even a moment when he wouldn’t let her take a bathroom break, so she urinated in a cup and threw it in his face.

Sometimes the off-screen drama in a movie is not totally antagonistic, but simply a case of disagreeing about part of the movie. In the case of Blade Runner, widely considered one of science fiction’s best movies, it was the lead character’s origin.

Director Ridley Scott believed that Deckard was a replicant himself, but he didn’t know it. In a case of reality merging with fiction, actor Harrison Ford refused to acknowledge that his character was a replicant. The Blade Runner director and star always fought about it, and even in later years, they still clashed when asked about the character.

The Exorcist is considered one of horror’s best movies and it is easily at the top of the food chain when it comes to exorcism movies. However, making the movie was not easy and there are a ton of stories about the tragedy surrounding the franchise.

However, there was also the off-screen drama that caused the making of the movie to go poorly for one of the stars. Ellen Burstyn called director William Friedkin a “maniac” and said he would do terrible things to get reactions from the cast. Things didn’t end well for Burstyn either, as an accident during a stunt left her with a permanent spinal injury.

Alfred Hitchcock remains known as one of the greatest directors to ever live and proved to be a master of thrillers and pacing that influenced Hollywood for years after he was gone. However, there are also terrible stories about Hitchcock as a person when it comes to how he treated his actresses.

Hitchcock reportedly had aspirations of being romantically connected to his leading ladies. The Birds star, Tippi Hedren, said that she rejected his advances while making the movie and he threatened to ruin her career as a result. Hedren’s granddaughter Dakota Johnson said in 2021 that Hitchcock followed through and did ruin her grandmother’s career.

Dustin Hoffman became a star thanks to his role in The Graduate as a young man who fell for an older woman. A decade later, he played a woman. In Tootsie, he played a man who pretended to be an actress to get a role in a soap opera when his career hit a roadblock thanks to his past history.

The movie was a huge success, nominated for 10 Oscars, and entered into the Library of Congress in 1998. However, the shoot was not easy as Hoffman and director Sydney Pollack fought about the tone of the movie. According to Bill Murray, they were always in an “ugly mood” when disagreeing with each other.

The Prince and the Showgirl was another movie where the off-screen drama was between the director and the main star. The director was classically-trained actor Laurence Olivier and the star was bombshell Marilyn Monroe. This drama was shown in the movie My Week with Marilyn.

Olivier, who also starred in the movie, grew frustrated with Monroe through the entire shoot, believing she didn’t care about acting at all. Co-stars complained that she was never on time and never hit her marks. Monroe and Olivier’s relationship hit a low point when he told her to “try and be sexy.”

If there was any movie that fans knew would have off-screen drama before it ever started shooting, it was The Island of Dr. Moreau. Richard Stanley got a chance for a big-budget movie and then ended up working with Marlon Brando and Val Kilmer, two brilliant actors notoriously hard to work with.

Stanley couldn’t control the actors and the production fired him and brought in the more experienced John Frankenheimer. Things only got worse, as Brando, Kilmer, and Frankenheimer all had different ideas about the movie. They fought constantly and, in the end, the director said he wouldn’t work with Kilmer ever again.

The Shining is a strange movie in the history of horror cinema. Many critics and fans consider it one of the best horror movies of all time. But author, Stephen King, hates it, saying it doesn’t tell the same story as the novel on which it is based. One thing most people agree on is that Shelley Duvall’s performance as Wendy is something that doesn’t work well in the movie.

This is allegedly, in part, because of all the off-screen drama between director Stanley Kubrick and Duvall. Throughout the entire production, Kubrick tormented Duvall, as was shown in behind-the-scenes footage. Reports indicate he was trying to get the right performance out of her, but it caused lasting emotional damage to Duvall.

Fitzcarraldo was a movie where the off-screen drama was more interesting than anything about the movie itself. In fact, the entire production was so wild that a documentary was made called Burden of Dreams, which has its own Criterion Collection release.

Among the behind-the-scenes drama surrounding Fitzcarraldo was the fact that long-time collaborators, Werner Herzog and Klaus Kinski, fought a lot on set, which Herzog showed everyone in his own documentary, My Best Fiend. Add in Jason Robards contracting amoebic dysentery, an attack by an Indigenous tribe, and the demands of physically moving the ship, and there are few movies with so much behind-the-scenes drama.

Francis Ford Coppola had an amazing decade in the 1970s, bringing the world the first two Godfather movies and ending the decade with Apocalypse Now!. However, that last movie was a disaster, regardless of its place in history. During the shooting, Coppola allegedly even considered taking his own life.

There was a documentary about the difficult Apocalypse Now! shoot called Heart of Darkness that details everything that went wrong. Lead actor, Martin Sheen, had a heart attack. Marlon Brando was as difficult as ever, also showing up massively overweight. The shoot went way over budget and overschedule, but the drama might be why it ended up so good in the end.

Disney+: all new movies and TV series will be released in...