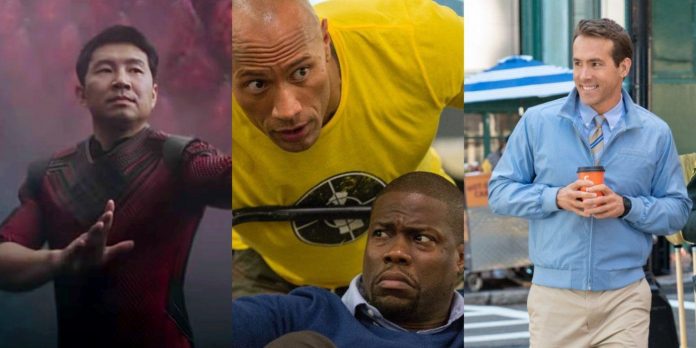 Brad Pitt has returned in the action thriller, Bullet Train, as Ladybug, who is just trying to retire from his bounty-hunting lifestyle. The movie mostly takes place on a speeding train and has impressive action sequences with humor and drama sprinkled throughout the plot.

Fans of Bullet Train may be looking for other movies with high-stakes, creative action sequences, stellar acting, and a variety of storylines overlapping. Movies like Central Intelligence and Shang-Chi and the Legend of the Ten Rings are a perfect fit for people who loved Bullet Train in all its glory.

One of the most recent action movies to come out arrived on Netflix in late July 2022 and has received mixed reviews, The Gray Man stars Ryan Gosling and Chris Evans and has a spy-versus-spy bent to produce a steady flow of action and suspense.

While the movie may not be as well-rounded and exotic as Bullet Train, fans will enjoy the same level of intensity and non-stop action. A satisfactory performance from Ryan Gosling as well as a glimpse of Chris Evans as a villain makes this movie worth the watch.

The 355 is another spy/heist movie, but it sets the record straight with an all-female-led heist group. Jessica Chastain, Lupita Nyong’o, and Penelope Cruz deliver stellar performances in a movie that loosely follows the heist movie motif but ultimately ends in a fresh and original way.

The fast-paced feeling from The 355 equally translates over to Bullet Train, which also centers on a briefcase of intel that everyone is trying to get their hands on.

Liam Neeson is most famous for his role in Taken but since then, he has been in movies very similar to his magnum opus. The Commuter is one, and takes place on a train, just like the majority of Bullet Train. Whereas Bullet Train has a mysterious story at times, The Commuter’s story is easier to solve. Nevertheless, the movie is a thrilling action ride led by Neeson.

Fans of Brad Pitt’s inventive action sequences will enjoy one of Liam Neeson’s hardest-hitting fight scenes in The Commuter. The movie may have extensive similarities with Bullet Train, but it is a good follow-up to the action movie of the summer.

Shang-Chi And The Legend Of The Ten Rings

Simu Liu’s MCU debut was a strong continuation of Phase 4, as Shang-Chi in Shang-Chi and the Legend of the Ten Rings. The highly rewatchable Phase 4 movie is a perfect complementary movie to watch following Bullet Train.

This film has many similarities to Bullet Train, including a transit bus fight scene, a protagonist who doesn’t want to fight, and a good mix between humor and action. Fans of the choreography of the fight scenes in Bullet Train will find Shang-Chi and the Legend of the Ten Rings extremely fun and well-planned.

In Bullet Train, Lemon and Ladybug form an odd and unlikely relationship revolving around the highly sought-after briefcase. Similarly, Bob and Calvin form a unique relationship centered around encrypted intel in Central Intelligence.

Related: All The Rock And Kevin Hart Movies, Ranked Worst To Best

Central Intelligence is a happy balance between humor, confusion, and suspense that showcases Dwayne Johnson and Kevin Hart’s on-screen chemistry. It is a worthy follow-up to Bullet Train that would continue the viewer down the path of outlandish humor and action.

One of Brad Pitt’s most recent blockbuster performances was in Quentin Tarantino’s Once Upon A Time In Hollywood. As Cliff Booth, a Hollywood stunt-man, Brad Pitt plays a tough man unafraid of the dangers of Hollywood, and real life. The film poses a dichotomy between real Hollywood work (stunts) and superficial danger (acting), ultimately pitting Booth at the center of danger in the film’s climax.

Brad Pitt fans old and new will enjoy one of his best performances following a stand-up lead in Bullet Train. The 2019 Tarantino film has bits of humor, drama, and self-appraisal, while ultimately ending with a signature Tarantino bloody ending.

The Hitman’s Bodyguard received many negative reviews in its debut, but audiences have seemed to give it more grace as a fun action film held up by Samuel L. Jackson and Ryan Reynolds.

Related: 10 Great Cameos In Not-So-Great Movies, According To Ranker

While the movie falls generic in many ways, it still contains some solid action sequences and banter between Michael and Darius. Fans of Bullet Train’s generic portions will enjoy an extremely safe movie that manages to use many comedy-action tropes in its two-hour runtime.

Atomic Blonde is a grim, gritty story of a Cold War agent that goes to Berlin to investigate a murder and recover intel on double agents. The 2017 movie is riveting and twisting, combining historical fiction and intense fight scenes to make an all-around satisfactory spy movie.

One of the best spy movies with a female lead will be liked by fans of Bullet Train. They will enjoy Atomic Blonde’s high-stakes energy as well as a darker take on the action genre. It holds up as an action movie that avoids typical tropes while not looking too unfamiliar with its own style.

While Bullet Train is a modern, high-tech approach to the action genre, The Man From U.N.C.L.E. is a modern homage to nostalgic 1960s action. Henry Cavill and Alicia Vikander star in the enthralling story of a fight against a mysterious organization in the business of dealing with nuclear weaponry.

The movie is enjoyable and big, as Bullet Train sets out to be. A well-placed cast makes Bullet Train reminiscent of The Man From U.N.C.L.E. For high-speed, creative car chases and shocking twists, follow Bullet Train with this 2015 hit movie.

Ryan Reynolds’ latest cinematic appearance was a widespread success. Free Guy blends pop culture, parody, and action for a joyride through a new world. Fans of Bullet Train might enjoy the film’s pacing and similarities between the main characters, namely confusion about the events unfolding before them.

Free Guy is well-produced and well-acted, just as Bullet Train is, and Reynolds’ typical sarcasm and personality shine in this highly original story. The main characters’ light-hearted banter between fight scenes and with enemies makes them both highly enjoyable and funny.