Home Entertainment 10 movie heroes who belong in prison, according to Reddit 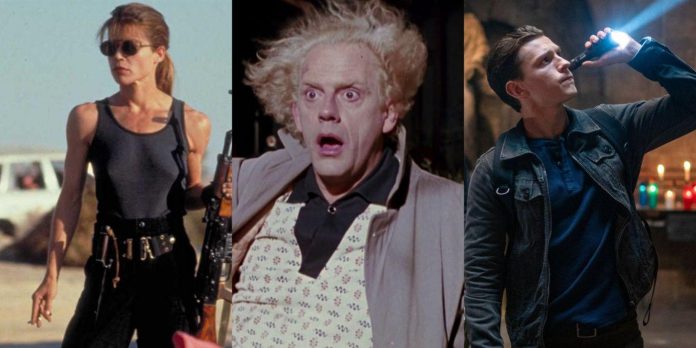 While it isn’t quite clear what direction the Marvel Cinematic Universe is heading in after the Infinity Saga was wrapped up, Tony Stark should be the villain of Avengers 5. That might sound a little strange given that he’s a beloved superhero and saved 3.5 billion lives, but some have argued that he isn’t all that heroic and that some of his actions should have landed him in jail.

But Tony isn’t the only movie hero that should have been thrown in the clink. Redditors have debating which characters deserved jail time based on their actions, despite their reasoning. Between Sarah Connor, Doc Brown, and the Ghostbusters, even the smartest of heroes deserve to serve time.

Landlubber77 notes that there’s no way Sarah Connor wouldn’t have been arrested at the end of Terminator 2: Judgement Day. The heroine caused so much destruction in the movie and even caused a huge shootout, and while it was all for the greater good and to stop the apocalypse, no authoritative figure would ever know that.

RELATED: The 10 All-Time Greatest Sci-Fi Movies, According To Ranker

The 1991 sequel has an optimistic ending, but the Redditor explains the depressing events that would unfold if the film went on for another 10 minutes. The user explains, “Sarah Connor is immediately thrown back into a mental hospital, this time maximum security, and John is back in the foster system.” Realistically, that’s unfortunately exactly what would happen, and John probably would have been blamed for his foster parents’ death too.

The Jim Carrey-led Liar Liar is one of his best 1990s comedies, as the wacky comedy has an ingenious premise wherein a spell is cast on lawyer Fletcher Reede that keeps him from lying. Being a lawyer, lying just so happens to be his profession, which leads to some outrageous moments. The 1997 film was Carrey’s most physically demanding role, but that might be due to the huge action sequence at the end of the movie.

At the end of the movie, Fletcher runs past airport security and onto the runway, then steals a stair car to catch up to an airplane. Pinpoint321 points out, “Jim Carey in Liar Liar is definitely going to jail for a massive breach of airport security.” In fairness, airport security in 1997 wasn’t what it is now, and it was way more lenient. But Fletcher would have gotten a fine at the very least.

The newly released Uncharted was stuck in development hell, and when it finally arrived, it was a very different product from what fans expected. Uncharted sees a much younger Nathan Drake than the video games that the movie is based on, but he’s no less ruthless. The movie follows him treasure hunting and acting fairly cavalier with human lives, whether it’s pulling them out of airplanes or getting in mass shootouts.

Jelatinman puts it best by explaining that the character “goes from good ol’ boy doing petty crimes to outright killing people for money,” and that the character belongs in jail. However, the video game version of Drake is much worse, and he kills hundreds of mercenaries and henchmen per video game.

JohnnyJayce thinks Wanda Maximoff should be locked up and the key should be thrown away. The Redditor argues, “Two times now has she been ‘the victim’ even though she’s just a villain.” The Redditor is referring to both Doctor Strange in the Multiverse of Madness and WandaVision.

However, while she certainly isn’t the hero in Doctor Strange 2, she is an anti-hero in WandaVision, and she should have been convicted for brainwashing a whole town and essentially using them as slaves. Instead, there were no repercussions. Even then, she committed manslaughter years earlier in Siberia in Captain America: Civil War.

Martin_Powel thinks mad scientist John Hammond should be in jail for manslaughter. The Redditor argues, “He recreated prehistoric creatures that ate four employees, a lawyer, and probably traumatized two children for life. I think it’s enough for prison.” It isn’t clear what authorities would arrest him, as the Jurassic Park island is closest to Costa Rica but probably isn’t within the country’s boundaries. Either way, Hammond has a lot of blood on his hands.

James Cameron almost directed Jurassic Park, as he raced for the rights to the Michael Crichton novel against Steven Spielberg, and if Cameron did direct the 1993 movie, it would have been a completely different beast. The Terminator director noted that his version of the film would have been “Aliens with dinosaurs,” meaning there’d be a lot more fatalities, and if that was the case, Hammond would have been locked up for a dozen lifetimes.

Traveling back in time isn’t a crime, and neither is inventing the time machine, but the chemical element that Doc Brown uses to fuel the time-traveling DeLorean is. Smokedspirit argues that the Back to the Future mad scientist should be in jail “for even talking to terrorists to obtain the plutonium, and then conducting scientific experiments with said plutonium.”

The element is extremely radioactive and is used for building nuclear weapons. And the fact that Doc rubbed shoulders with people who sold it isn’t just wrong, but it also raises suspicions about what else the doctor is involved in. He might not be the loveable weird genius that people think he is.

Given that Captain America: Civil War is all about the idea of superheroes being governed, it’s no surprise that the movie is full of heroes committing crimes for the greater good. However, Tony Stark, who is actually for the Avengers being governed, arguably commits the biggest crime in the movie. DrRexMorman explains, “Tony Stark gave a lethal weapon to a 15-year-old and then transported that 15-year-old across international borders as part of a mission to kill another one of his employees.”

RELATED: MCU – 10 Avengers And Their Darkest Moment In The Franchise

The Redditor is referring to the billionaire philanthropist hiring the teenage Peter Parker to do his Spider-Man thing and fight a handful of seasoned superheroes. The thought of Tony doing that makes no sense and he intentionally put a child in harm’s way, and that equals jail time.

Benjamin Franklin Gates is one of the more relaxed Nicolas Cage characters. But that isn’t saying much, as the character steals from museums, and in National Treasure: Book of Secrets, he even kidnaps the President of the United States. But, according to Ill_Heat_1237, that’s nothing compared to “stealing the Declaration of Independence.”

In the first National Treasure, Cage steals the document because a secret clue to the treasure is concealed within it. And, once again, the hero was, of course, stealing it just so that the bad guys couldn’t get it first. Either way, the Redditor believes that Gates belongs in jail because of it.

The Mask is technically a superhero movie, and the movie is full of that classic Jim Carrey comedy, but it isn’t remotely suitable for kids. The character flagrantly messes around with machine guns, has no respect for the law, and commits some terrible crimes. In that respect, The Mask massively influenced Deadpool, but Ceribus_peribus thinks one antihero belongs in jail more than the other.

The Redditor notes that Stanley Ipkiss “straight-up robs a bank, and then later frames a mobster for it.” Stanley might not recall any of the crimes that his alter ego commits, but even the countless amounts of misdemeanors he commits will add up to quite a sentence.

Ghostbusters is one of the funniest comedies of the 80s, but it also seamlessly blends comedy with adventure and action. The Ghostbusters is a great service for New York, but Americanadian25 thinks that Peter Venkman and his crew should be locked up.

The Redditor posits, “Unlicensed nuclear tech in the middle of downtown New York wouldn’t go down so well in the real world.” However, the gang was arrested in the film, and it was only when the world was being attacked by ghosts that they were finally released.

In the sequel to Jon Snow’s Game of Thrones, 5 perfect...