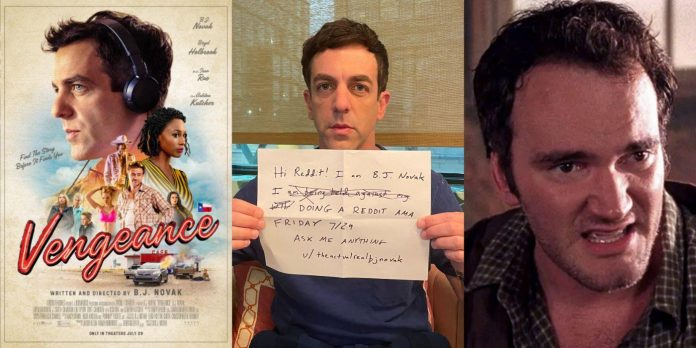 B.J. Novak made his directorial debut with the new movie Vengeance, which he also wrote and stars in, and to promote it, he jumped on Reddit for an Ask Me Anything. The actor can be seen all over TV and movies, but he’s easily best known for playing the intern-turned-sales director Ryan Howard in The Office.

The Jack of all trades wrote a lot of the sitcom’s episodes and produced even more. Unsurprisingly, a lot of Redditors’ questions revolve around the show, and the actor doesn’t hold back on giving fans what they want. Ultimately, Novak spent hours speaking with Redditors about The Office, Quentin Tarantino movies, and if there was time for it, a little bit about his new movie.

Though Vengeance is Novak’s directorial debut, he has an endless list of writing credits. His writing credits include The Office, The Mindy Project, and The Premise. And outside of TV, he has had major roles in some massive movies. He has acted alongside Tom Hanks in Saving Mr. Banks, Michael Keaton in The Founder, and Brad Pitt in Inglourious Basterds.

Those are some huge credits, and if anyone is wondering which he prefers more, acting or writing, Novak gives somewhat of a diplomatic but still definitive answer. RemiasH asked which he prefers, and the writer answered, “Acting is more fun, writing is generally more satisfying, for me.”

Steve Carell Is The Best Actor He’s Ever Worked With

Clashoftherats doesn’t beat around the bush and straight-up asks Novak who is the best actor he has ever worked with, and Novak responds with just as straight-up of an answer, simply saying, “Carell.” Even though it was a one-word answer, it tells readers everything they need to know. The answer is so direct and to the point that it’s clear Novak didn’t need to think twice.

It’s hardly a surprise, as Novak first played Ryan at such a young age, and Steve Carell must have mentored him to some capacity when it comes to both improv and acting. The two shared some of Michael’s best scenes in the show, such as when Ryan embarrasses Mike at his college and when Michael sells The Michael Scott Paper Company to Dunder Mifflin.

How Vengeance Changed During The Writing Process

The movie that the whole Ask Me Anything is promoting, Vengeance, didn’t get much attention in the AMA, as most of the questions were The Office-related. However, SalaciousCrumb17 asked about the movie’s writing process, and given that Novak is more of a writer than an actor, he gave an unsurprisingly detailed answer.

Novak explained that he went through what felt like a million drafts, responding, “Sometimes it was too comedy, sometimes too meta, sometimes too serious, sometimes too sappy… had to really hone it and got some great help with that from producers and editors.” It seems like Novak is his biggest critic, and given how he’s great at all of the above, it sounds like there are hundreds of brilliant lines that audiences will never get to hear.

Even people who have never seen The Office will recognize Novak, as he’s in so many huge movies, no matter how big or small of a role. One of the most exciting projects he has ever worked on is Quentin Tarantino’s Inglourious Basterds, as he played one of the members of the titular Nazi-killing gang.

Ultros03 asked the actor what it was like working on the movie, specifically with the celebrated filmmaker and Brad Pitt. Novak responded, “The experience of a lifetime, like I was caller 9,109,863 in a radio call-in contest in heaven” Aldo Raine is Pitt’s best Tarantino role, and Novak seeing Pitt in character as a Nazi killer must have felt like he was getting his own private masterclass in acting.

This user asked the writer-director, “If you could only pick one person from your career to work with one more time, who would it be?” And Novak chose Tarantino. It doesn’t come as much of a surprise, as so many actors want to work with Tarantino because of how well-written and three-dimensional his characters are. A Tarantino-written role is a meal ticket to stardom for any up-and-coming actor.

While Novak probably had more screentime in the 2009 film that was probably cut, he only had two or three lines of dialogue in the whole thing. Given how the Basterds have surprisingly little screentime in the 2.5-hour movie, especially as the movie is named after them, there could always be a sequel that focuses more on each character.

On Working With Creed Bratton

The reason why The Office is so great and is unique from other sitcoms out there is because of how it lets the supporting cast shine. Creed Bratton (the name of both the character and the actor playing him) is one of the side characters, as has a limited amount of screen time but leaves the biggest impression on viewers. He is an enigma wrapped in an enigma and the most meme-worthy Office character.

Reddit user Beatsbypre asked Novak what it was like working with Bratton, and he responded, “There is no line between fiction and reality with Creed and that makes him the best possible person to work with.” The Office writer and actor almost makes it seem as if Bratton is like his character in real life, which only makes the character even better.

Ctg9101 looked for some behind-the-scenes information, as they asked who the nicest cast member of The Office was, and Novak answered Angela Kinsey, who plays the cat-loving, judgmental Angela Martin on the show. What makes this so interesting is that Angela is the cruelest, most vindictive character on the show, and as the show is full of characters like that, that’s saying a lot.

She’s so awful to her Dunder Mifflin employees that some even think that Angela didn’t deserve her happy ending. However, according to Novak, she’s the nicest cast member, but he still gives credit to the other Office characters, adding, “But it was and is a super nice cast”

Novak is clearly a huge fan of Tarantino, as not only does he strive to work with the writer-director again, but he cites 2019’s Once Upon a Time in Hollywood as his current favorite movie. Interestingly, the 2019 movie actually has a lot in common with Inglourious Basterds, as they both star Pitt, and they both recount historical events in such fictional manners.

This answer came when Elirichey asked him what his favorite movie is, and Novak seems to be something of a cinephile, as he gave an extensive list. The actor also called Pulp Fiction, yet another Tarantino classic, his favorite movie of all time, along with Adaptation, Casino, The King of Comedy, and many others. When it comes to comedy, Novak noted The Naked Gun and My Cousin Vinny as the best of all time.

The Key To Being A Good Writer

Proudmelon asked Novak what every amateur wants to know, and Novak gave some sage advice and a couple of pieces of advice that he seemingly practices with every single one of his projects. The writer explains, “Editing yourself. Writing from the heart but never being satisfied with the first draft.”

Given that Novak advises that writers must know how to edit themselves, it’s ironic that he’s such a fan of Tarantino. For as great as the writer-director is, many believe that Tarantino doesn’t know how to edit himself, that Django Unchained should have ended half an hour earlier, and that Hollywood didn’t need to be 160 minutes either.

Novak Still Has His Dundee Award

Some of the funniest Office episodes are the ones where Michael is handing out awards to his staff in a Chili’s restaurant to boost morale, only he always ends up doing the opposite. That’s due to the award categories, such as Angela winning the Tight-Ass award, Toby winning the Extreme Repulsiveness award, and Andy winning the Doobie Doobie Pothead Stoner of the Year award.

However, as Michael has a soft spot for Ryan, the intern wins the award for Hottest in the Office. It’s also hilariously mentioned in “Michael’s Last Dundies” that Ryan won the same award in 2006, 2007, 2008, 2009, and 2010. Tjherrera simply asked Novak if he still has the award, to which he simply responded, “Yes.”