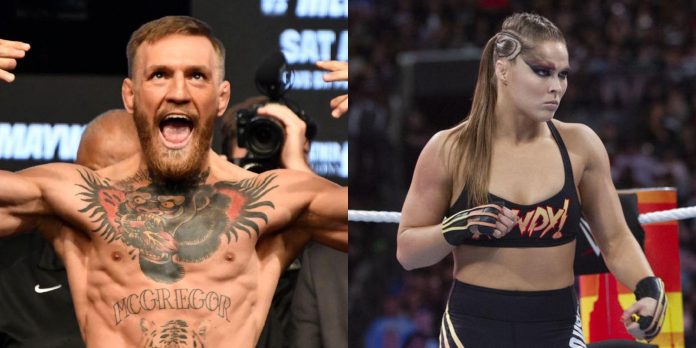 With the ever-growing popularity of mixed martial arts, MMA stars are quickly becoming some of the most famous athletes in the world today (with plenty of movies focused on the sport). Their combat skills and bravado-filled antics on the microphone have surely captured the imaginations of sports fans worldwide. Some of the feats these fighters pull off in the cage have people questioning whether or not these people are actually real-life superheroes.

Since athletes transitioning into acting after a certain amount of time is a common occurrence with albeit some mixed results, some of these MMA stars could in fact end up in the Marvel Cinematic Universe one way or another.

The Last Stylebender not only has an exciting skill set right out of a comic book and an incredible amount of charisma to have anyone who has even remotely heard of the sport hanging on to his every word and action.

RELATED: 9 Avengers And Their Greatest Accomplishment In The Franchise

Adesanya’s style of cutting promos on the microphone using his trademark sharp wit fits perfectly with the signature MCU style of quippy and humorous dialogue.

The way Wonderboy performs in the octagon with spinning kicks and quick movement is extremely reminiscent of the combat scenes in the Marvel Cinematic Universe. Stephen Thompson has shown in the past that he has a knack for analyzing action scenes. He could be even better at choreographing them.

RELATED: 10 Things That MCU Fans Want To See At Comic-Con 2022, According To Reddit

Considering that the only big-time MMA star to show up in the MCU so far has been another Karate-based fighter in George Saint Pierre, Wonderboy with his exciting moveset and wholesome attitude could be a great fit in the MCU.

GSP has already made an appearance in the MCU, bringing Batroc The Leaper to life through expertly crafted action sequences in both Captain America: Winter Soldier and The Falcon And The Winter Soldier.

Although his character was sadly killed in the TV series, the spinoff-heavy Disney could quite simply produce a Batroc The Leaper original series with St-Pierre leading it. A proven draw with a nation behind his back, the retired fighter could be ready for his own series.

At a certain time, Rowdy Ronda Rousey wasn’t just the biggest name in mixed martial arts but in the entire sports world. Now that she is an active professional wrestler, working on her acting skills routinely, she could be primed for a major cinematic appearance.

Similar to the role she played in Furious 7, she could quite easily find herself a role opposite Yelena or Kate Bishop as an imposing figure with innate charisma and extremely credible martial arts skills. She could also play a friend of Yelena’s, who is helping to free the other Widows from Dreykov or helping her with her contracts.

While he might currently be busy with his career as a commentator, Mike “The Count” Bisping isn’t a stranger to acting. He was in fact busy filming a movie when he won the UFC Middleweight Championship.

Now a retired fighter with a huge following and incredible skills and charisma on the microphone, Michael Bisping could play the role of Captain Britain to perfection, making for an incredible, imposing, and hilarious Brian Braddock.

The former strawweight MMA legend, “Joanna Champion ” has officially retired and fans would love nothing more than to see the iconic fighter have a successful venture as an actor.

Joanna Jedrzejczyk is the complete package when it comes to being a larger-than-life character. Her intimidating style during many of her face-offs and exciting fighting style gives her the tools to portray a perfect MCU villain akin to Taskmaster.

Couture is not only a mixed martial arts legend but also a veteran of action movies with amazing fan support and believability behind his fight scenes. The name recognition and credibility that he has was a key reason in his inclusion in the action movie all-star cast of The Expendables franchise.

His trademark grizzled veteran style and proven action movie experience could result in him appearing in and choreographing incredible set pieces for the Marvel Cinematic Universe. If some fans had it their way, they would like to see him play Wendigo.

The second-ever Strikeforce Middleweight Champion has quite the acting resume, including The Man With The Iron Fists, produced by Quentin Tarantino and directed by RZA. His signature kung-fu-inspired movie combat style and history would make him a great addition to MCU organizations, such as The Hand or The Ten Rings.

With the success of Shang Chi And The Legend Of Ten Rings and the confirmation of a fourth season of Daredevil, the stars seem to be aligned for Cung Le to find himself a place in the MCU. His experience in filming old-school fight scenes, combined with Marvel’s latest tendency to play with different genres could result in a unique combination.

His nickname says it all: Super Sage Northcutt. Given that he constantly keeps in shape and has shown himself to be very good at promoting, Super Sage already has already got the basics down for being a legendary superhero.

If Marvel Studios ever decides to make a Young Avengers series, which is now more possible than ever with the arrival of Kate Bishop, Northcutt would be a great option to play the role of Hulkling or Quasar.

When it comes to The Notorious One, all rules and logic disappear. He is still currently one of the biggest names in the world with any venture he takes part in becoming an incredible financial success.

Whether he is simply playing a character or playing himself in an MCU product, McGregor would bring an incredible amount of attention and instant box office boost with him. With the way his career has shaped up in recent years, acting could just as well be the next step for him, with some fans arguing that he could easily make an interesting Black Tom Cassidy (via tvovermind.com).