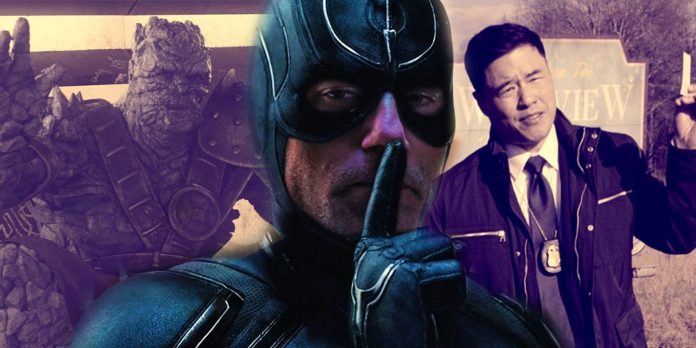 The Marvel Cinematic Universe is expanding into new and untested territories during Phase 4, including a plethora of Disney+ streaming series. Now that the MCU has mastered the limited series format, its next endeavor includes shorts, beginning with I Am Groot in August.

With I Am Groot within reach and a Halloween and Christmas special on the horizon for 2022 and 2023, the MCU has countless possible shorts in the future, which can flesh out characters that are typically relegated to side stories. When the franchise inevitably continues this trend, certain characters deserve to receive their series of shorts.

Dr. Darcy Lewis (Kat Dennings) is back in action following the events of WandaVision after disappearing from the MCU for several years. Following her work with S.W.O.R.D. during the events of the Westview Hex, Darcy has grown in popularity among MCU fans, making her a prime candidate to return shortly.

Darcy is no stranger to the excitement, having teamed up with Thor and Photon during her time in the MCU. Though fans have called for her spinoff series following WandaVision, a series of short films could do the character better justice by chronicling other encounters she may have had with various superhumans.

FBI agent Jimmy Woo (Randall Park) made his first appearance in Ant-Man and the Wasp as Scott Lang’s parole officer and has made one subsequent appearance in WandaVision. Jimmy is surprisingly enthusiastic about his job and has a love for simple magic tricks, which he picked up from Lang himself.

Jimmy Woo has been a standout personality in his two onscreen appearances, making him a commonly requested character to receive his spinoff. Given the character’s history in Marvel Comics, such a spinoff could take the form of a series of short films centered around a newly-built Agents of A.T.L.A.S. team.

Karun Patel (Ibu Hatela) is the personal valet of Kingo in Eternals, who tags along on the eponymous superhero team’s adventures to stop the Emergence. Even among a cast of mythologically-based superheroes, Karun stands out to audiences for his sheer enthusiasm for moviemaking and endearing personality.

Karun was easily one of the funniest characters in Eternals, which makes him the perfect character to get his shorts, perhaps depicting the documentary that he was attempting to film during the events of the film, which would undoubtedly make for entertaining television.

Scott Lang’s best friend and a highlight of the Ant-Man films, Michael Peña’s Luis has been absent from the MCU since Ant-Man and the Wasp. Nevertheless, fans are excited to see his return in the upcoming Quantumania next year.

Rumors have long persisted that there somewhere exists a clip of Luis retelling the story of the Infinity Saga in his signature storytelling style. Though Kevin Feige and his team have yet to release any such clip to the public, a series involving Luis recapping previous Marvel movies would be a dream come true for many fans.

The Illuminati of Earth-838 was one of the most talked-about moments in Doctor Strange in the Multiverse of Madness. Consisting of variants of Peggy Carter, Maria Rambeau, Charles Xavier, Baron Mordo, Reed Richards, and Black Bolt, the clandestine governing body continues to be one of the most memorable additions to the entirety of Phase 4.

A common criticism of Multiverse of Madness has been that the concept of the Illuminati is thrown away rather quickly. Short films centering around the group could repair this mistake, depicting their acts leading up to their introduction to Earth-616’s Doctor Strange. Such a project would also further the emotional weight of the Illuminati’s brutal deaths at the hands of the Scarlet Witch.

David Harbour’s Alexei Shostakov, otherwise known as the Red Guardian, is the Soviet Union’s answer to Captain America and one of the best new heroes introduced in the MCU’s Phase 4. Appearing in Black Widow, Alexei acts as Natasha Romanoff and Yelena Belova’s faux father during a secret mission to the United States.

The Red Guardian claims to have an abundance of war stories during his time as a superhero, though it appears that many of them are completely untrue. Audiences would no doubt be entertained by a series of quick adventures of the Red Guardian wherein his true colors are fully shown.

Korg (Taika Waititi) and Miek are two of Thor’s new friends he met while imprisoned on Sakaar in Thor: Ragnarok. Now acting as his travel companions, the two alien creatures are confirmed to have a bigger role in the upcoming film Thor: Love and Thunder.

Korg and Miek may not have an abundance of screentime in the MCU, but every scene is memorable thanks to their winning personalities. These two characters are perfect for a series of shorts depicting a space-faring adventure following the events of Love and Thunder, which could act as a wrap-up to the film’s groundbreaking events.

The Falcon and the Winter Soldier introduces Isaiah Bradley (Carl Lumbly), a Black super-soldier who was betrayed by his county and imprisoned for decades. Thanks to Sam Wilson, however, Isaiah’s legacy is restored and the true story of his heroism during the Cold War is finally told to the world.

Isaiah Bradley has a long and storied history as the unsung hero that bridged the gap between Captain America’s disappearance and the rise of the Avengers. His exploits as a supersoldier would make for thrilling television, weaving an emotional story of racial injustice and betrayal.

Cobie Smulders’s Maria Hill has been an integral character in the Marvel Cinematic Universe since The Avengers as the right-hand woman of S.H.I.E.L.D. director Nick Fury. Set to make her next appearance in Secret Invasion, Hill continues to be an important part of the franchise’s future.

Maria Hill has been a part of the MCU for over a decade and yet continues to be relegated to a supporting role in each appearance, making her a prime candidate to lead her series of shorts. Her ties to both S.H.I.E.L.D., S.W.O.R.D., and Stark Industries provide plenty of potential storylines that could give Hill a chance to flex her espionage techniques.

Thanos’s Black Order are his minions, whom he raised as his children to assist in his conquest to destroy half of all life in the universe. Consisting of Ebony Maw, Proxima Midnight, Corvus Glaive, and Cull Obsidian, the Black Order plays an important role in Avengers: Infinity War, gathering the Infinity Stones for their master.

The Black Order is an incredibly interesting group of henchmen that are not explored nearly enough in their brief appearances. These characters each have intriguing backstories that are not touched on during Infinity War or Endgame, which could make great plotlines for a potential Disney+ short, one for each character’s training under Thanos. While it isn’t likely any of these characters will come back in the MCU’s future, their history rooted in the Infinity Saga is certainly worth exploring.