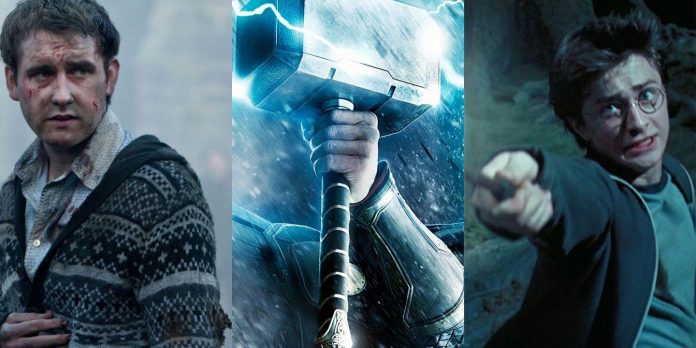 In the recently premiered Thor: Love & Thunder movie, Jane Foster is chosen as worthy to hold Mjolnir, and she becomes the Mighty Thor. With her new powers, the superhero manages to save Thor from Gorr, despite her body struggling with cancer. However, because of Mjolnir, her body was unable to fight the disease. The fact that Jane was willing to die for the good of the world is exactly why she was worthy of holding the hammer.

Many characters in the MCU have tried to hold Mjolnir and failed, proving themselves unworthy. However, it would interesting to know which heroic characters from Harry Potter would be able to hold the elusive hammer. These are the characters of the series that are humble, daring, and virtuous enough to lift Mjolnir.

Tonks is known for her quirky personality and clumsiness, but she’s way more than that. She’s an extremely talented Auror who was a crucial member of the Order of the Phoenix. However, what makes her worthy of Mjolnir is her confidence, her humbleness, and her sense of duty.

Tonks never backs out of a fight, helping not only the Ministry of Magic but also the Order of the Phoenix to defeat the dark wizards. The metamorphomagus could have stayed home with her son during the Battle of Hogwarts, but instead, she joined her husband and friends to defeat the most powerful wizard magical society had ever seen, so she could provide a better world for Teddy.

There’s a big reason why Hagrid is the person Dumbledore trusts the most: not only is the giant extremely strong, but he’s one of the kindest characters in the series. His nurturing nature quickly made him a crucial person in Harry’s journey. On top of that, Hagrid has a deep respect for all living things, and his compassion knows no bounds.

Even though sometimes Hagrid can be a little reckless, his heart is always in the right place. The giant always goes the extra mile for his loved ones, even daring to travel through Europe in the worst conditions possible to bring his brother home. Hagrid’s extreme loyalty, deep commitment to his family and friends, and great sense of responsibility for all living things earn him the right to lift Mjolnir.

Minerva McGonagall is not only one of the most talented wizards in Harry Potter and an excellent teacher, but she’s also a principled person with high morals. Even though this professor may seem hard to approach, she cares deeply about her students, going as far as risking her life to protect Hogwarts.

The Transfiguration’s professor isn’t scared to stand up for her beliefs, such as when she stops Umbridge from interrupting her class. However, she also has the criteria to understand which are the best moments to take action. This kind of level-headed and wise hero is exactly what Mjolnir is looking for.

Although Regulus Black joins Lord Voldemort as a Death Eater, later on, he realizes he needs to stop the dark wizard. He’s one of the first characters in the series to realize Voldemort’s plan about the Horcruxes, and for this reason, he tries to destroy Salazar’s Slytherin locket.

RELATED: The Umbrella Academy Characters And Their Harry Potter Counterparts

Regulus was underestimated by both his family and the Dark Lord, but he proved to be a lot more than people expected from him. Even going against his own family’s ideals, Regulus sacrificed his life trying to stop Voldemort. It’s a shame Sirius couldn’t know his brother better, but Regulus, unlike his brother, would be more than worthy.

Even though most characters underestimate her, Luna Lovegood is one of the best wizards in the Harry Potter movies. Her honesty knows no bounds, even when people find her dislikable. However, Luna doesn’t mind if she doesn’t fit in, instead, she sticks to a strong set of principles, which is admirable, to say the least.

Being a Ravenclaw, Luna is not only smart but also outstandingly brave. She doesn’t hesitate to join Harry and his friends in Dumbledore’s Army, also accompanying him to the Mistery of Magic to rescue Sirius Black. Fer readiness to battle and her determination would surely earn her Odin’s respect.

Hermione is one of the most intelligent and wisest witches of her generation, but she’s so much more than a bookworm. She constantly raises her voice to defend those in vulnerable positions, such as when she creates S.P.E.W to fight for the rights the house-elves deserve.

Even though the young witch is not particularly suited for battle, she’s a strong-minded person who constantly fights for what she believes is right. The way she stands up for others, her pursuit of justice, and her willingness to help Harry in the darkest of times make Hermione a courageous and loyal character suited to hold Mjolnir.

Dobby may not look like the stereotypical strong hero, but neither did Jane Foster when she was chosen by Mjolnir. Dobby continuously put himself in dangerous positions for doing what he believed was right, even going against his master’s wishes, a feat that house-elves find very difficult to achieve.

This loyal companion was crucial for Harry’s journey. The house-elf helped Harry time and time again, warning him about Umbridge and giving him the information about the Room of Requirements, even if these important Dobby scenes didn’t make the Harry Potter films. Dobby’s strong values and loyalty make him more than worthy to hold the God of Thunder’s hammer.

It’s well known by all Harry Potter fans that Harry’s mother’s sacrifice saved his son’s life on more than one occasion. Her willingness to die to protect her son created a magical shield that made Harry untouchable to Lord Voldemort. Much like Jane Foster, who also sacrificed herself to protect a loved one, deciding to hold the hammer one last time even when she was aware that it would kill her.

RELATED: Stranger Things: What The Patronus Of Each Main Character Would Be

Still, Lily’s heroic nature goes beyond her last few moments alive. When she was younger, Lily defended those who were vulnerable and was against the Marauders treating others with disrespect. She also joined the Order of the Phoenix to protect muggles and wizards from Lord Voldemort’s evil agenda. Lily’s strong principles and willingness to die for her loved ones make her a worthy candidate for Mjolnir.

Surely most people would agree that Neville wouldn’t have been worthy of the hammer in the first few installments of the series. However, Neville grows to be one of the best wizards in the Harry Potter movies. He shows his true Gryffindor colors in the Deathly Hallows, going head first into battle and intrepidly facing Voldemort.

Without him, defeating the Dark Lord would have been an impossible feat, since the young wizard creates the means for Harry and the Order of the Phoenix to go back to Hogwarts. On top of that, he also epically murders Voldemort’s last Horcrux, Nagini, with Gryffindor’s sword. In a Mjolnir fashion, the sword only appears to those who exhibit Gryffindor’s heroic values.

There’s no question that Harry would be worthy of holding Mjolnir. The boy who lived has outstandingly passed this sort of test time and time again. When Dumbledore hides the Philosopher’s Stone in the Mirror of Erised so only someone who doesn’t want to use it can find it, Harry immediately receives the stone.

It’s Harry’s humble and heroic nature that allows him to ultimately defeat Voldemort, a feat that Dumbledore himself couldn’t achieve since he was too thirsty for power. Harry’s willingness to sacrifice himself for the good of society in the last installment of the series shows his virtuous and courageous traits, and surely, Odin would recognize him as worthy.