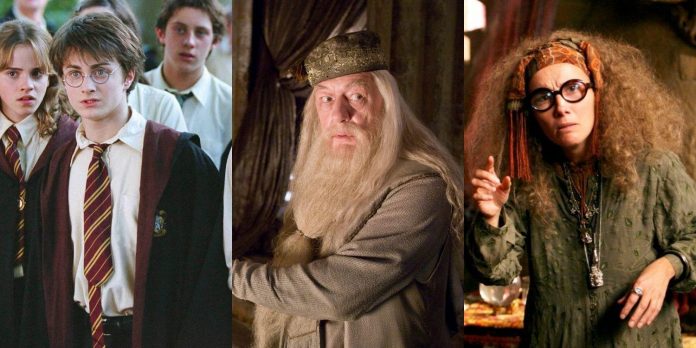 The Harry Potter books and films introduced a generation to a magical world living alongside the world of humans (or muggles). Teeming with mythical beasts and in-universe lore, the Wizarding World is also rife with allusions to Greek, Norse, Slavic, and other mythologies.

Whether it’s directly evident in their names or indicated by their actions, many characters in Harry Potter come straight from the pages of myth and legend. These examples only scratch the surface of the mythological, literary, and historical parallels present in the Wizarding World.

The mother of Lord Voldemort had a troubled life. Longing to escape her tyrannical father, she bewitched Tom Riddle, the muggle man she loved, to marry her. When the love potion wore off, Riddle left his pregnant wife with nothing, and she died shortly thereafter.

Merope Gaunt shares more than a name with her Greek mythology analog. One of the Pleiades, daughters of the titan Atlas, Merope was the only one of her sisters to marry a mortal. Because of her marriage, some myths suggest that when the seven Pleiades became stars, Merope shone dimmer than the rest, hiding her face in shame (via Theoi). Her husband, Sisyphus, was famously punished by the gods for repeatedly cheating Death, an achievement Merope Gaunt’s son would one day aspire to.

Making an impressive magical first impression in The Prisoner of Azkaban, Remus Lupin’s name suggests multiple related mythological associations. The marauding werewolf moonlights as a Defense Against the Dark Arts teacher at Hogwarts, then assumes a leadership role in the reconstituted Order of the Phoenix.

His first name evokes one of the legendary twin founders of Rome, Romulus and Remus, who were nursed and raised by a mother wolf (per History Channel). His last name drives home the allusion, deriving from the Latin lupinus, for “wolf.” Meanwhile, the cave in which Romulus and Remus lived with their wolf mother was called, according to the legends, the Lupercal.

Professor Pomona Sprout, the jovial Herbology teacher and Head of Hufflepuff House, derives her first name from Roman mythology. Pomona was a goddess of abundance, fruitfulness, and orchards. The goddess Pomona was a favorite subject of ancient poets like Ovid, and later of Renaissance and pre-Raphaelite artists.

Rather than a goddess of the harvest, like the Greek Demeter and other nature deities, Pomona was concerned with the care, nurturing, and flourishing of fruit trees (via GreekMythology.com). Likewise, Pomona Sprout teaches the care and properties of magical plant life, keeping a robust greenhouse at Hogwarts.

Standing in contrast to Remus Lupin ( a werewolf who regrets his condition) is Fenrir Greyback. Bloodthirsty and sadistic, Greyback relishes his lycanthropy, maintaining a permanently monstrous appearance and demeanor.

In Norse mythology, Fenrir is a giant, monstrous wolf and son of the god Loki, who differs from Marvel’s Loki significantly. Fenrir figures heavily in the myths surrounding Ragnarök, the Norse apocalypse, and the destruction of the gods. Just as Greyback eludes capture by the Aurors of the Wizarding World, the Norse Fenrir is imprisoned in vain, for he is prophesied to break his chains and participate in the chaos of Ragnarök (per History Channel).

Alternately known as Padfoot, the Grim, and even Snuffles, Sirius Black, a fan favorite Harry Potter character, is an unregistered Animagus who takes the form of a large black dog. Named for a star within the constellation Canis Major, representing the dogs of the Greek mythological hunter Orion, Sirius signifies a cornucopia of canine folklore.

Ominous black dogs appear in legends across England. In West Yorkshire, there are tales of Padfoot, a black dog who walks lightly alongside a person, signaling their imminent death. Widespread folklore of the Church Grim describes a black dog who guards churchyards against evil spirits and ill-intentioned men. Other versions, according to Thought Catalog, include the terrifying Black Shuck and the spectral Barghest. Like Sirius, the black dogs of English folklore can be fearsome, but in some permutations, they are loyal protectors.

While her powers of prophecy frequently resemble charlatanism, Sybill Trelawney proves herself capable of true sight at key moments in the Harry Potter series. In a trance-like state, she delivers the prophecy that spurs Lord Voldemort to target the infant Harry, and in The Prisoner of Azkaban, she predicts Wormtail’s return to Voldemort’s side.

RELATED: 10 Life Lessons From The Harry Potter Series, According To Reddit

Trelawney’s first name alludes to a title granted to oracles or prophetesses in Ancient Greece. As explained by Atlas Obscura, the famous sibyl at Delphi would inhale vapors to induce a frenzy, from which she delivered the prophecies of Apollo. It’s also mentioned in the books that Professor Trelawney’s ancestor Cassandra was a renowned seer. In Greek mythology, Cassandra was a Trojan princess and prophetess who, spurning the advances of Apollo, was cursed to have her prophecies disbelieved.

Considered the most powerful wizard in the Harry Potter franchise, Albus Dumbledore is a dedicated fighter against the Dark Arts and Headmaster of Hogwarts. Despite the pristine reputation he gains with age, Dumbledore’s past is darker than he lets on. He takes cues from the legendary figure of Merlin, who serves as a wizard and advisor to King Arthur.

Merlin’s father was an incubus, making his access to magic the result of his demon ancestry. Like Merlin, Dumbledore struggles with shame about his family and past connections. Both transcend their unsavory origins, however, and grow into steadfast mentors for the younger generation. Dumbledore and Merlin usher Harry and Arthur, respectively, from childhood into adulthood, helping shape the young men into compassionate, capable leaders.

The first name of Hogwarts’ long-serving Transfiguration teacher and Deputy Headmistress says it all. Minerva is the name of the Roman goddess of knowledge and war and counterpart to the Greek goddess Athena. The association with combat is signaled by Professor McGonagall’s position as Head of Gryffindor House, the home of Hogwarts’ bravest students, but Athena is more than just a wartime goddess.

She’s a master of crafts like weaving, and she’s the patron and benefactor of Athens. Athena brought the olive to mankind, which offered food, wealth, and a symbol of peace (via Culture Trip). McGonagall, though outwardly strict, serves as a counselor and fierce protector of her students. McGonagall is one of the best wizards in the Harry Potter movies, always offering insight, advice, or a rallying cry. When the time comes to take a stand, McGonagall, like Athena, strategically leads Hogwarts’ forces in battle.

The evil Lord Voldemort, born Tom Riddle, has one goal in mind, immortality. His chosen name, in French, translates to “flight from death.” While his rise to power and political agenda resembles historical dictators like Adolf Hitler, his single-minded quest to conquer death corresponds to an immortal wizard from Slavic folklore.

According to Ancient Origins, Koschei the Deathless appears in numerous Russian folk and fairy tales, usually as an antagonist to a young hero. Koschei’s immortality is sustained by an unusual practice, using a magic spell to hide his soul inside a needle, which he nests inside an egg, inside a duck, inside a rabbit, inside a chest, which he buries on a remote island. This convoluted ritual is echoed in Voldemort’s creation of Horcruxes, objects that store fragments of the soul outside the body.

The Boy Who Lived carries a multitude of mythological and literary parallels. He’s at once a Christ figure, an epic hero the likes of Theseus and Heracles, and more. Perhaps Harry Potter’s most fitting counterpart in legend, however, is King Arthur.

Both Harry and Arthur are descended from prominent families, but both grow up away from their homes, unaware of their true inheritance. Harry wields the Sword of Gryffindor, which he first pulls from the Sorting Hat, proving his place in Gryffindor, and later discovers at the bottom of a lake. Arthur pulls his first sword from a stone, proving his right to the throne, and receives Excalibur from the Lady of the Lake. Furthermore, while Arthur marries Guinevere, Harry marries Ginny Weasley, whose full first name is Ginevra, the Italian form of Guinevere.