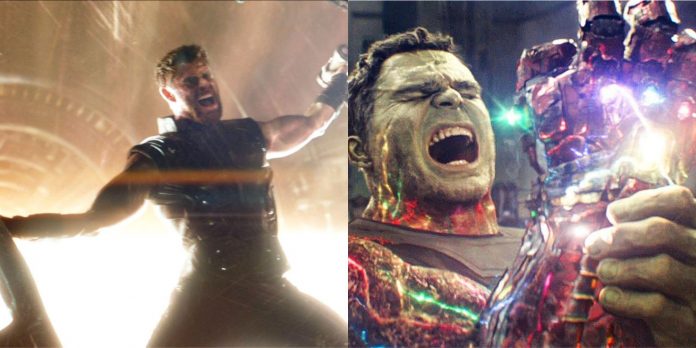 KVM brought many of Marvel’s most powerful heroes to the big screen, and “Thor: Love and Thunder” (July 8) will introduce fans to Gorr, the Butcher God and the gods of Olympus, and fans will almost certainly see a huge number of demonstrations of the power of Thor, Valkyrie and Jane Foster, who is going to wield the mighty hammer Mjolnir in the film.

From fighting space creatures and aliens to having the power to create or destroy the universe, MCU heroes have demonstrated their power in many different ways over the years, but which of these feats are undoubtedly the greatest manifestation of power?

Hulk stops Leviathan with one punch

In one of the many inspiring moments from The Avengers (2012) Hulk arrives at the Battle of New York and immediately shows why he is one of the strongest members of the Avengers, stopping Leviathan in his path with just one blow.

Fans haven’t seen anything like this from the Hulk in the MCU yet, and considering that Leviathans were huge beasts that most characters couldn’t even dream of defeating, stopping the monstrous creature with just one punch was quite an impressive feat.

The Avenger’s battle with Ultron in Sokovia became one of the most exciting final battles of the MCU, and at the end of the battle, Thor and Iron Man used all their power to destroy the falling capital of Sokovia.

By demonstrating the full power of both of these Avengers, they have shown that they are capable of mass destruction. Although the Avengers would face heavy consequences for the way this battle was fought, surely this feat was all the more impressive.

It’s safe to say that the long-awaited battle between the Hulk and the armor of the Hulk Buster Iron Man in The Avengers: Age of Ultron” lived up to the hype, even if some fans didn’t agree that Tony Stark came out on top.

Despite the dubious outcome of the battle, fighting the Hulk, blow by blow, was an amazing display of strength, and the fact that an ordinary person has enough resources and ingenuity to resist a powerful behemoth like the Hulk makes this a feat worthy of attention. much more impressive.

Loki introduced fans to many different versions of the God of Mischief, including an older version of the character (known as Classic Loki). In one of the most stunning moments of the show, the Classic Loki created the illusion of Asgard entirely to distract Alioth.

Although fans had seen Loki create many illusions before, this was a whole new level of power than anything seen in any version of Loki in the MCU. Showing the full scale of Loki’s abilities as an illusion caster, classic Loki created a fake Asgard, illustrating that power can be shown in many ways.

The Guardians use the Power Stone to destroy Ronan

Despite the fact that Guardians of the Galaxy is full of humor to the brim, they had a lot of emotional moments and demonstrated some of the most striking manifestations of power that have ever been seen in the MCU. In a moment filled with emotion and power, the Guardians join forces to destroy Ronan with the Power Stone.

As it becomes known throughout the film that only the strongest beings in the universe have the power to wield stones, the fact that a team of losers from all over the galaxy can use this power shows how formidable the Guardians of the Galaxy are.

Captain America is not a character that is usually associated with a cosmic-level force, but Thanos’ containment in Avengers: Infinity War made fans and the Mad Titan himself be impressed by the sheer bravery and willpower of Steve Rogers.

Although he is only a mortal man, Cap has withstood the impact of the Infinity Gauntlet, which has the power of the Five Infinity Stones. Captain America has shown that he will never back down before an opponent and that his will can allow him to stand up to the strongest villains in the MCU.

Captain Marvel was already presented as a powerful character even with her power damper, but after she reached her full potential and devastated almost the entire Ronan fleet, she made it clear that she is one of the strongest heroes in the MCU.

In a fight in which Captain Marvel blew up, beat, or simply flew through enemy ships, Carol Danvers showed that she was a one-woman army that could stand up to any villain, fleet, or anything else that would prove a threat to the universe.

Thor withstands the power of a star

The God of thunder proves again and again that Thor can’t do anything.