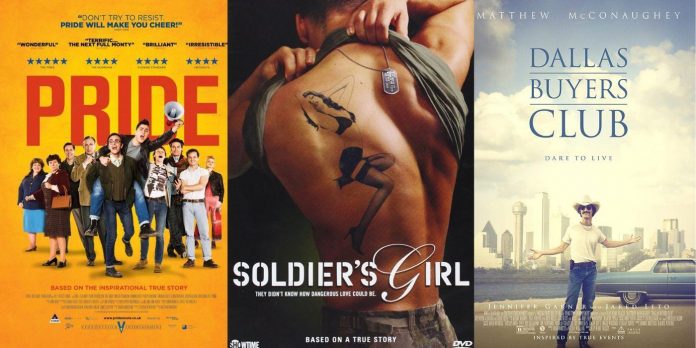 For decades, queer cinema was relegated to the shadows of the entertainment world. Some might get screened at a few small film festivals or have a one-night-only showing in New York’s Greenwich Village, but many ended up becoming straight to VHS or DVD releases, remaining virtually unknown to mainstream viewers.

Luckily, in recent years the world has become much more accepting and LGBTQ+ movies are finally getting the recognition they deserve. And what many might not realize is that some of the most lauded queer films in history are actually based on true stories and real people; showing the varied, unique, and sometimes awe-inspiring lives of LGBTQ+ pioneers.

Originally released as a Showtime original movie, Soldier’s Girl centers around the tragic death of Barry Winchell in 1999. One night he and some of his army buddies took a trip to an LGBTQ bar in Nashville called The Connection. There, Winchell fell in love with a transwoman, Calpernia Addams. As rumors began to spread around Ft. Campbell, Winchell became the victim of endless harassment and was ultimately murdered in his sleep.

The film starred Lee Pace as Calpernia and was released to universal acclaim, being nominated for Emmys, Golden Globes, and GLAAD awards. It even won the prestigious Peabody Award for spotlighting the harmful effects of bigoted policies like “Don’t Ask, Don’t Tell.”

During the 1984 miners’ strike, a group of Welsh miners and LGBTQ+ activists became strange bedfellows when they decided to form a coalition to fight back against mistreatment. Members of the LGBTQ+ community formed the group Lesbians and Gays Support Miners after realizing police harassment against the community dropped off during the strike. The group discovered this was because the police force was now being used to harass the striking miners into submission. In an effort to form an alliance and help the cause, the organization heads to a small Welsh town to bring supplies and raised funds.

Pride centers around the group’s arrival in Whales and the awkward (and somewhat hilarious) events that ensued when a group of working-class miners suddenly find themselves fighting alongside a group of LGBTQ+ activists. The film was a massive hit and eventually took home two awards from the Cannes Film Festival.

Milk was based on the real life of Harvey Milk, America’s first openly gay person to be elected as a public official. Milk served as a member of the San Francisco Board of Supervisors and while the title might not seem like a lot, the fact that a gay person was elected by the public to any position in 1978 was a huge milestone for the LGBTQ+ community.

The film stars Sean Penn as Milk and details his run for office, his work with the community, his sometimes controversial actions, and ultimately, his assassination. Milk went on to be nominated for eight Oscars, with Sean Penn winning for Best Actor.

Based on the memoir by Timothy Conigrave, Holding the Man chronicles the life and love of Timothy and his partner John. The two grow up together and are college-aged when the AIDS crisis begins in 1981. Despite numerous breakups and infidelity, the two finally realize they want to spend their lives together. Tragically, it’s then that the two discover they’ve both tested positive for HIV.

In the book and film, Tim realizes he’s the one who gave John HIV and must come to terms with what that means and find a way to carry on. It’s a heartbreaking but very real look at what life was like for gay men in an era when a deadly virus was ravaging the community while society refused to step up and help, and instead, isolated and ostracized the gay community.

Stream On Tubi & The Roku Channel

In 1993, Brandon Teena, a trans man, was brutally raped and murdered in a small Nebraska town. He was dating a girl and the two were in love, however, others in the town didn’t approve. Brandon’s final day alive was heartbreaking and macabre, and to this day, those events fuel the trans rights movement.

In the film adaptation of Brandon’s life and death, Boys Don’t Cry, Hilary Swank plays Brandon Teena, a role which earned her a Best Actress Oscar, and Brandon’s girlfriend was played by Chloë Sevigny, who received a Best Supporting Actress nomination.

Based on an almost unbelievable true story, I Love You Phillip Morris showcases the life of Steven Jay Russell, played by Jim Carrey. Russell was a con artist who was caught stealing money while living in Miami. After being taken to prison, he falls in love with fellow inmate, Phillip Morris. Throughout the next few years, Russell repeatedly broke out of prison, once even convincing the world he was dead, all to be with Morris.

While the movie was never a commercial success in America, it played well overseas where it earned 90% of its $20 million box office haul. However, since its release, the movie has become somewhat controversial as Phillip Morris claims he was actually the victim of a wildly manipulative and jealous con-man.

Based on Garrard Conley’s memoir of the same name, Boy Erased examined Conley’s time as a teenager when he was forced into conversion therapy by his religious parents. Conley (who, in the film is renamed Jared) is sent away to Love in Action – a now-defunct conversion therapy camp that was riddled with scandal.

In fact, the leader of Love in Action during the time Conley was there – John Smid – eventually stepped down from the position, admitting he was still gay and that conversion therapy doesn’t work. Boy Erased tells the horrific, bizarre, and unhealthy environment conversion therapy camps create, and the lasting emotional impacts they have on the kids who are forced to attend them.

In 1980, Al Pacino starred in a highly-controversial movie called Cruising, about a serial killer who targeted gay men in NYC’s leather scene. In order to avoid an X rating, director William Friedkin had to remove 40 minutes of graphic S&M sex scenes…that footage has since been lost.

RELATED: 10 Iconic LGBTQ Filmmakers You Should Be Watching, According To Reddit

In Interior. Leather Bar. James Franco attempts to recreate this lost 40 minutes of footage – but the movie is actually a step beyond that. It’s a film that chronicles Franco’s making of the lost footage, not about showing the lost footage itself. Instead, it highlights the actors’ discomforts with the material, their fears of being perceived as gay, the relationship and contrast between art and pornography, and homoeroticism and stigmatization. Interior. Leather Bar. is part arthouse cinema and part documentary, but wholly unique.

Kinky Boots was a small indie film that developed a devout cult following and was later turned into a hit Broadway musical that ran from 2013-2019. But the whole story actually begins in the ’90s, back when a struggling shoe company in the East Midlands, W.J. Brooks, reinvented itself by making shoes (especially knee-high boots) for drag queens.

The film chronicles the factory worker’s hesitancy and initial embarrassment but shows how the LGBTQ+ community and the factory workers ended up working together to keep the business alive and grow the brand’s support around the world.

The talented Matthew McConaughey would go on to win an Oscar for his role as Ron Woodroof, the founder of the “Dallas Buyers Club.” Woodroof was diagnosed with HIV in the mid-80s and though many who knew him claim he was gay, Woodroof insisted he wasn’t and contracted the disease through drug use. While taking an early-era AZT treatment (an HIV prevention/treatment medication), Woodroof noticed his health quickly declined. He decided to begin using himself as a test subject to try out other, less-harmful HIV treatments and began selling his drugs to other HIV patients.

In retrospect, Woodroof was quite wrong about his assumptions. The drugs he was selling were not helpful, but he was right in that the AZT treatments of the time were toxic. As noted by The Washington Post, the early doses of AZT were way too high, which caused side effects, and when not taken with other antiviral medications, HIV easily formed a resistance, causing the AZT treatment to become useless. Thanks to Woodroof’s (somewhat flawed) activism, a deeper dialogue for HIV treatment was started, giving rise to better medications.