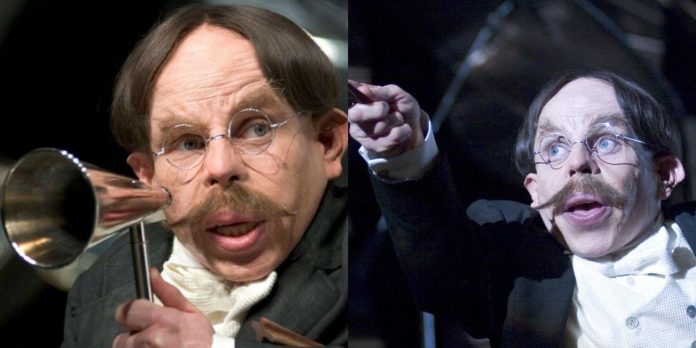 With the recent release of Fantastic Beasts: Secrets of Dumbledore, fans are seeing more complex backstories of characters from the original Harry Potter novels. There’s always been a debate on whether movie adaptations are as good as the source material, and Harry Potter is no different.

Though the movies have seen great success, the movies can’t capture every detail from the books, oftentimes removing entire storylines and characters. For instance, Professor Flitwick had a very small role in the movies. In the books, however, he had a much larger and more important role. Despite the movies having a huge fanbase, there are many details about Flitwick that moviegoers have missed out on had they not read the books as well.

Because Filius Flitwick was a Ravenclaw student, it’s no surprise that he was tempted by the rumors of the lost diadem to seek it out. It is said the wearer of the diadem will have enhanced wisdom, and seeing as Ravenclaw is about knowledge, many a Ravenclaw student has looked for it.

Related: 10 Wildest Fan Theories About Bellatrix Lestrange In Harry Potter, According To Ranker

According to the books, Dumbledore and Flitwick both asked Helena Ravenclaw (the Grey Lady) for the whereabouts of the diadem, but she refused them both. The only people she relented to were Tom Riddle and Harry Potter.

He Taught The Hogwarts Doors To Recognize Sirius

As the Charms Professor, Flitwick is the most knowledgeable and competent in charming objects. In The Prisoner of Azkaban after Sirius Black escapes from prison and everyone fears he is looking for Harry to kill him, Flitwick is seen charming the doors to recognize Sirius so they don’t let him in.

What no one knew was that Sirius is an Animagus, so Flitwick is unable to tell the doors to be on the lookout for a large, black dog. Despite Flitwick’s best intentions, Sirius is still able to get into the school and cause a bit of unintentional mayhem.

He Left Fred And George’s Swamp In The Corridor

In Order of the Phoenix when Harry needed help speaking to Sirius, Fred and George set up a diversion to give him time to do so. They created a “portable swamp” that turned the corridor in front of Umbridge’s offices into a big, messy swamp that couldn’t be cleaned up.

In the movies, Fred and George leave Hogwarts while the 5th years are taking their O.W.L.S. however, in the books, this is when Fred and George say goodbye to Hogwarts instead. After Umbridge leaves Hogwarts, Flitwick cleans up the swamp but leaves a roped-off patch of it saying it was a good bit of magic.

Flitwick Was A Dueling Champion

In Chamber of Secrets, the students are welcome to join the new Dueling Club that’s starting up. When Harry, Ron, and Hermione are speculating on who would teach it, Hermione says, “someone told me Flitwick was a dueling champion when he was young”.

Later, in Harry Potter: Hogwarts Mystery, more information is revealed about Flitwick and his expertise in dueling. The game reveals that he has a shelf full of trophies he earned prior to becoming a professor at Hogwarts, which only reinforces the fact that Professor Flitwick is an incredible wizard.

He Likes A Very Sweet Drink

In The Prisoner of Azkaban when Harry, Ron, and Hermione eavesdrop on the adults discussing Sirius Black, they hear all of their drink orders. Unsurprisingly, Flitwick’s is a very sweet drink: cherry syrup and soda with ice and an umbrella.

Related: 10 Characters In Harry Potter Who Made The Most Magical First Impressions, According To Ranker

Professor Flitwick is a very sweet man. His response to Ginny being taken into the Chamber of Secrets was to burst into tears. He is a kind, caring professor who prefers to drink sugary drinks that are as saccharine as he is.

He Explained The Fidelius Charm

Before Harry was born and during the reign of Voldemort, James and Lily Potter were on the run and hiding from Voldemort and his Death Eaters. Dumbledore gave them the idea for the Fidelius charm, but it was actually Flitwick who explained the concept of the charm to them.

As a Master of Charms, it’s not surprising that Flitwick would help them to understand just how it works. Flitwick taught James and Lily when they went to Hogwarts and said in Sorcerer’s Stone that he was fond of Lily, so obviously he did not want to see them taken down by Voldemort.

Flitwick Was Not Part Of The Order

In both the movies and the books, when Harry arrives at 12 Grimmauld Place, Professor Flitwick is not present. However, in the books, readers know that Flitwick helped battle against Voldemort and his Death Eaters during Voldemort’s first reign. The movie version of Flitwick is highly reduced whereas in the books he has a much more prominent role.

What is surprising is how Flitwick doesn’t appear to be a part of the Order of the Phoenix. He is one of the most, if not the most knowledgeable at casting charms, a master duelist, and loyal to Dumbledore. A few Redditors speculated that Flitwick and Sprout couldn’t be affiliated with the Order since they also had to protect the students. In the movies it is implied that all of the professors that opposed Voldemort were part of the Order, however, that isn’t the case in the books.

During the 20th anniversary of the release of Harry Potter and the Sorcerer’s Stone, four new editions of the book were released that included never-before-seen tidbits of information. Inside the Hufflepuff edition, it’s revealed that “Professor Sprout had a long-term relationship with fellow teacher Professor Flitwick. Sadly it didn’t work out but they remain friends”.

Flitwick Was Almost Sorted Into Gryffindor

Any true Potterhead will be familiar with the now-defunct website, Pottermore (now wizardingworld.com). At its inception, Pottermore allowed fans of Harry Potter to be sorted, included brand new information on characters, and released chapters that were ultimately cut from the final editions.

In a chapter about Minerva McGonagall, Rowling revealed that McGonagall was almost sorted into Ravenclaw and that the hat agonized over sorting Flitwick into Gryffindor. It’s clear how the hat could be conflicted considering how intelligent McGonagall is and how brave Flitwick is, but it ultimately made the right choice.

In the movie Deathly Hallows Part 2, McGonagall fights Snape to stop him from harming Harry. In this scene, Harry reveals himself in front of an assembly of students. In the book, during Harry’s quest to find the lost diadem, he and Luna help McGonagall find a way to evacuate the students before the battle begins.

It’s as they’re running through the corridors that they come upon Snape, and McGonagall engages Snape in a duel. As she fights Snape, Professors Flitwick, Sprout, and Slughorn all come to McGonagall’s aid, with Flitwick squeaking, “you’ll do no more murder at Hogwarts!” and throws a spell that brings a suit of armor to life, briefly capturing Snape.