Home Entertainment 10 Directors with the Biggest Quality Gap Between Their Best and Best... 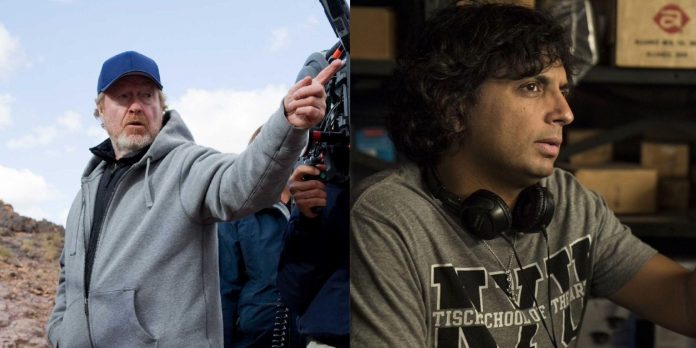 With more news coming out about M. Night Shyamalan’s new horror movie currently in production, Knock At The Cabin, fans will be hoping it will add another masterpiece to the director’s illustrious library. Shyamalan has also had some infamously poor movies, however, including the much-maligned The Last Airbender so excitement surrounding his projects tends to be a little cautious even now.

He’s not the only director to whom this applies though, as many acclaimed directors have had major slips in quality. Reddit is only interested in the directors that have the biggest gap in quality between their best and worst movies though and these were the directors they came up with.

One of the few directors to have been nominated for an Academy Award and a Razzie, which he won, Martin Brest’s relatively short directorial career was anything if not inconsistent. Redditor fishbiscuit156 summarized his highs and lows, as he directed “one of the best movies of the 80s” in Beverly Hills Cop but he “also did Gigli, regarded as one of the worst movies ever made.”

Beverly Hills Cop was a sensation when it was released in 1984 and it launched both the director and Eddie Murphy into stardom. On the other hand, Gigli, a disastrous mess of a movie that made the recently-married Ben Affleck and Jennifer Lopez seem like they have zero chemistry, still stands at 6% on Rotten Tomatoes and Brest hasn’t returned to directing since.

The Wachowski Sisters have a habit of dividing opinion, with Lana Wachowski’s most recent effort, The Matrix Resurrections, dividing critics and fans, some of whom thought the movie shouldn’t have been made. Redditor c0dearm explains their reputation for inconsistency, as “they did The Matrix and then Jupiter Ascending”.

Whilst there was a gap of 16 years between the iconic mind-bending classic The Matrix and the monumental critical and box-office flop Jupiter Ascending, that’s nothing compared to the gulf in quality between the two. Despite a well-meaning message and a star-studded cast, the movie was panned by critics for its dull characters and endless tedious dialogue.

Having directed some of the most iconic movies of the 80s and 90s, including This Is Spinal Tap, The Princess Bride, When Harry Met Sally, and A Few Good Men, Rob Reiner has managed to get away with his reputation intact despite some notable flops, which is why many are excited to see him in the director’s chair for This Is Spinal Tap 2.

Redditor BigMartinJol notes the director’s “unbelievable run of movies across various genres” but points out “he also made North.” Starring a pre-Lord of the Rings Elijah Wood, North not only bombed at the box office but was also mocked by critics who saw it as a schmaltzy comedy that seemed to lack even one decent joke. Spinal Tap fans will be hoping Reiner’s worst is long behind him though.

It’s always a shame when a director’s last movie is also their worst but it would be hard to overshadow the best of John McTiernan’s directorial career. Redditor Warden72 acknowledges the best of his career, which includes some of the must-watch movies of the 80s in Die Hard and Predator.

They follow this with “And then the remake of Rollerball…” With tensions between the producers and director so high that it became the focus of a federal investigation, as reported by the New York Times at the time, Rollerball turned out to be an overblown mess and all the worse for unfavorable comparisons with the original. It sits at an almost impressive 3% on Rotten Tomatoes.

Though his most recent movie Cry Macho was a box office disappointment, it’s likely the 92-year-old isn’t too concerned about commercial success these days. However, that’s not to say the director can’t produce incredibly successful movies as well as flops, with Redditor BrendanCLittle pointing out that he “has 2 best picture winners and he has 15:17 to Paris”.

Movies like the Oscar-winning Million Dollar Baby as well as his illustrious acting career ensure that Eastwood’s legacy is secure but The 15:17 to Paris, a well-intentioned biographical movie about the 2015 Thalys train attack, proved the director is far from perfect, as critics and audiences felt the use of the real-life participants of the events along with a poor structure made it borderline unwatchable.

As the director of movies including The Godfather trilogy and Apocalypse Now, if anyone could get away with making a high-profile flop and have it be forgotten quickly after, it’s Francis Ford Coppola. That seems to be the case as the low-quality moments in his illustrious career haven’t stopped his upcoming project, Megalopolis, from causing excitement already.

One Redditor helped remind everyone of his lowest moment, by saying “Compare the first couple Godfathers with Jack.” Jack is a 1996 comedy-drama that stars Robin Williams as a 10-year-old boy with the body of a 40-year-old man. Williams’ distinctive charm just becomes offputting in this context and, after it was critically panned, Coppola is likely happy most people don’t remember the movie.

Though he remains one of the most bankable directors in Hollywood, Burton’s relationship with critical success is a lot more complicated. 2010’s Alice in Wonderland is a great example of how he can still get incredible ticket sales without quite winning over the critics. Redditor MovieBuff90 suggests this is part of a wider problem with the director.

They believe it’s a shame that the director of “some of the most unique and daring mainstream movies ever released” in the 80s and 90s has entered a “phase of making uninspired adaptations of classic stories”, something that resonated with a lot of people. Whilst it’s not as obvious as it is with directors that make box office disasters, Burton’s modern movies arguably lack the real flair and quality of his earlier work.

One name that dominates discussions of wildly inconsistent directors is M. Night Shyamalan. As the director of The Sixth Sense, Signs, Unbreakable, and The Village, it once seemed like Shyamalan could do no wrong but that turned out to be far from true.

Redditor EqualDifferences emphasized just how big the gap between Shyamalan’s best and worst movies is by saying that while watching The Happening, they “kept wondering how it was even possible that this was the same man” who once crafted cinematic masterpieces. With his more recent movies like Split and Glass showing more signs of quality, many hope that he will continue his return to grace.

Whilst some argue that Cats was already a creepy musical before Tom Hooper’s critically panned and visually offputting adaptation came out in 2019, it’s hard to argue that it’s the work of a director at his best. Obviously, he can’t be blamed for all of that movie’s issues but, as Redditor Grandahl13 points out, it’s the fact he went from “best picture winner to the worst movie of the decade” that makes it stand out.

That Academy Award-winning movie was The King’s Speech which won no shortage of praise for its visual style and Hooper’s excellent direction. In contrast, Cats won two Razzie Awards and a critical rating of just 19% on Rotten Tomatoes. The two are very different movies, however, so it wouldn’t be surprising at all to see Hooper bounce back in style.

There’s no denying that Sir Ridley Scott holds a special place in cinema history. Any of Alien, Blade Runner, Thelma & Louise, and Gladiator could have made him a legend on their own and he’s still directing acclaimed movies like House of Gucci today. Unfortunately, as Redditor Rhett9able succinctly explains, he doesn’t just direct good films, he also “made EXODUS Gods and Kings.”

A biblical epic with an all-star cast including Christian Bale, Joel Edgerton, and Sigourney Weaver, Exodus: Gods and Kings had all the makings of another classic. Unfortunately, it didn’t live up to the hype as far as critics and audiences were concerned, as it earned a 52% score on Metacritic. Then again, the fact that this is considered such a huge difference in quality from his best movies shows just how incredible his best was.

Russian Made Version of The Lord of the Rings Released