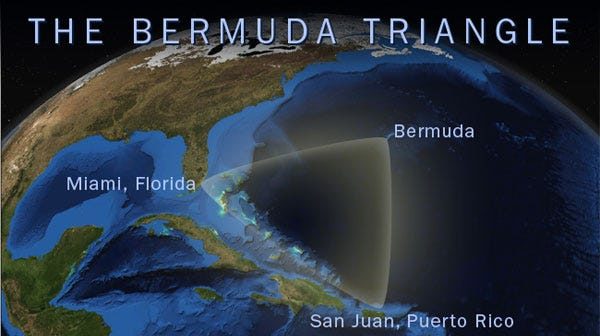 Science is not always enough to calm the nerves of those flying over the Bermuda Triangle. So much so that some pilots even refuse to enter there. Because we encounter accidents in the past.

It is a completely complex region of the ocean, covered with complete mystery, that makes sense to neither pilots nor scientists.

The region in question began to be mentioned badly with what happened over the years. What happened was not only limited to accidents, it brought unexplained weather events, mysterious time inconsistencies, and even losses. While many events can be explained with modern technology, this does not always help to calm the nerves of flying over the Bermuda Triangle. So there are some reasons not to fly over the region.

10- The weather is unpredictable and dangerous:
Of course, this can happen anywhere. Due to its geographical location, the Bermuda Triangle is prone to increasingly complex weather conditions, in addition to everything below the surface. Hard waves appear from the irregular ocean floor.

9- Signals deteriorate:
Often this place is said to be susceptible to magnetic anomalies that lead to various difficulties: strange weather, non-working compasses, false coordinates. This unique magnetic transition means the disappearance of many pilots or captains in the middle of the Triangle.

8- The time frame is not always what we think:
There are claims by pilots that a very precise distance has been made on the Bermuda Triangle to understand that the elapsed time cannot be explained according to the scientifically displayed mileage.

7- The stories in the past do not leave pilots:
Most memorable stories are still important. Everything from the lost planes to the wrecks drawn from unusual places and from the sea floor is described as a “fair game” in this location.

6- Flight 19: The plane that never rotates:
In 1945, no news was received from the five naval fleet bombers that took off from Fort Lauderdale. This case, also called Flight 19, went down in history as the first missing plane to occur in the Bermuda Triangle. The planes involved in the losses left no debris behind. One of the two planes taking off to search for five planes was also interestingly lost.

5- Methane explosions can explain mysterious losses:
Methane bubbles at sea may be one of the reasons that ships sink in the Bermuda Triangle area. Methane gas can be present in a solid state trapped inside a cage of ice crystals. Methane can turn into gas again as a result of the heating of methane hydrate reserves in the ocean floor or the pressure on it decreasing. Scientists think that this process, which caused large amounts of methane gas to escape from the sea floor to the surface, could cause the ships in the Bermuda Triangle to sink.

4- Possibility of running out of fuel:
While this is much less mysterious, many people have realized that their fuel has become a problem when flying over this vast water. Whether it is a timing issue or the fact that aircraft technology has the potential to fail, fuel, airplanes are essential.

2- Technical problems in ships and aircraft:
According to some opinions, the problems experienced by the sea and aircraft are invited to the accident.

1- Electronic fog:
A pilot named Bruce Gernon claims to have been unable to navigate the plane in any way for 28 minutes after entering an electronic cloud in the Bermuda Triangle. It is stated that electromagnetic fields interfere with electronic components on a ship, causing all directions and potential communication to be closed.

The Secret of the 2100-Year-Old Mysterious Mummy in Egypt Has Been...