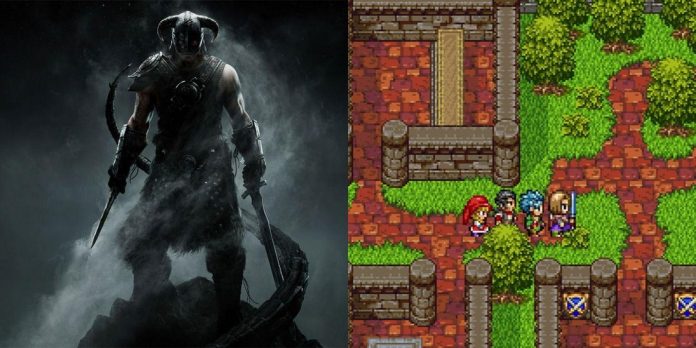 As they say, sometimes it’s more about the journey than the destination. While many role-playing games, such as Elden Ring, are entirely dedicated to hacking and paving the way to fame and greatness, some focus more on the world and the enchanting elements that bring it to life in front of the players.

Paving the way to hero status is good, but sometimes it’s nice to use a fictional world to just escape, relax and get away from it all. From picturesque landscapes of natural beauty to far, far kingdoms, many games allow gamers to go on a journey, explore and simply experience another kingdom.

When it comes to the smell of virtual roses, Stardew Valley players do it in the shade. The game is one of those rare and magnificent games that simply allow players to simply exist. There are so many adventures and affairs in this serene 16-bit masterpiece that the players are not bound by any ordinary role, duty or way of playing.

Yes, there is a storyline and an end goal, but how the player gets from point A to point B remains entirely at his discretion. The game practically allows players to build their own lives, giving them the opportunity to become an adventurer, remain a simple farmer or combine both options. They can get married, sell their crops, raise cattle, be friends with a wizard and do a lot of other things without leaving their consoles.

“The Short Hike” deserves an honorable mention simply because it takes so much from the Legend of Zelda series in such a short period of time. The game is exactly what the name implies, it is a short walk uphill, meeting various characters and obstacles on its way. However, it is such a peaceful and serene journey that it deserves to be discussed.

Its RPG elements are masked in its development as the little bird character gains new gear and abilities as the player progresses further uphill, and yet it’s the story and interactive moments that really sell the title. The game feels retro from the 2000s, and the suburban structure of the experience really establishes this comforting element.

The best way to describe this forgotten game is a charming golf role—playing game. Yes, golf is a key element, as the name suggests, but role—playing and plot elements are more than welcome. In the role of the pompous hero of the game, players are presented with a story about the dreamer’s last chance to achieve fame in golf when he participates in a country club tournament.

The very part of the golf game is also fun, reminiscent of the 16-bit arcade games of the 90s, but it is the amazing combination of elements that gives the game personality. Don’t be fooled by the design and appearance, the clubs hide a brilliant and fascinating role-playing experience.

Red Dead: Redemption is a very cinematic series, and it would be untrue to call it a role—playing game. The player can spend hours creating the image of a Wild West hero or antihero in the person of John Marston and Arthur Morgan, and this is just the tip of the iceberg for the names of cowboys, shooters and criminals.

The player can complete quests and earn rewards at their leisure, but they can also go down a less well-trodden road and enjoy the various amenities that Table Mountains and plains have to offer. They can go hunting, fishing or fight with different thugs to earn a reputation. The phrase “Yee-Haw Skyrim” is certainly more than a comedic fan observation.

Of all the open-world fantasy role-playing games that players can enjoy, Skyrim is perhaps the most accessible. Available on a variety of consoles from PS3 to Nintendo Switch, there are now more ways to play the iconic Bethesda game than ever. While fighting dragons with Voice power is certainly enjoyable, it’s not the only way to play.

Simply put, Skyrim is a game in which the plot is completely optional. A smart player can create his own epic, regardless of the dragons, Blades or Greybeards on top of High Hrothgar. It’s literally a “choose your adventure” scenario.

According to the numerous fan base, Undertale has earned a good reputation thanks to its delightful characters and moral mechanics. A game in which players literally win by making friends with monsters and creatures they encounter is certainly more than remarkable. Needless to say, he takes a lot of established tropes and turns them upside down.

Monster goats, puppies and pun—spewing skeletons are all in the order of things in this character-based game, and establishing a relationship with them can dramatically affect the outcome of the game. Another question is whether the player will play well with others.

Assassin’s Creed Valhalla | Play For Free For A Limited Time...