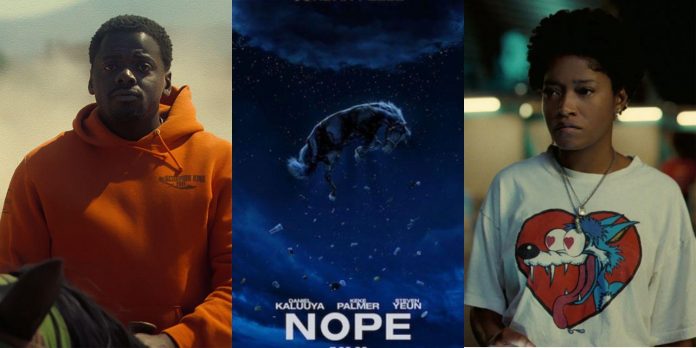 Nope is writer-director Jordan Peele’s third cinematic endeavor, taking audiences down an unexpected path of horror and intrigue as mysterious events begin to unravel on a family’s ranch in southern California.

Known for his stellar scripts, Peele delivers several noteworthy lines throughout the film, many of which will stick with the audience for days after viewing, as the greater themes of fame, fortune, and the American dream begin to become clearer in their minds.

“You Know They’re Gonna Bring Us Back For The Sequel.”

Otis Haywood and his son, Otis Jr., have an interesting conversation whilst training a horse for an upcoming movie in Nope’s mysterious and tantalizing opening scene. During their seemingly nondescript conversation, OJ comments that he believes the film producers will bring them back for their next project.

While this line doesn’t particularly come into play later in Nope, the fact that it is delivered by Daniel Kalyuuya, who starred in Jordan Peele’s directorial debut Get Out, seems to indicate that this is a nod to audiences. Many fans have lobbied for a sequel to Get Out for years and, while this line does not outright confirm such a project, it does appear to be an indication of Peele noticing such fan outcry.

In an early scene of Nope, OJ Haywood works with a commercial crew, wrangling a horse needed for the production. However, he finds his advice being consistently ignored by the workers, who can’t seem to follow his instruction to not look the horse in the eye.

This line proves to be vitally important to the film, as Haywood would later piece together that the same is true of the alien creature that haunts his ranch. The ultimate key to survival in this film reveals itself to be looking away from the monster, as is very much the case with temperamental animals.

“From The Moment Pictures Could Move, We Had Skin In The Game.”

Keke Palmer’s Emerald Haywood establishes herself as one of the best characters in Jordan Peele’s three films in her first scene, as she gives a speech to a film crew about her family’s involvement in the origins of cinema. She claims that the Haywoods have always had a part to play in the development of the film industry before going on to promote her own talents.

Emerald’s speech not only establishes the importance of the Haywood family but also reveals her own desire for fame, something that her great-great-great grandfather was denied. However, it is this very desire that she must give up at the end of the film in order to survive.

“What’s A Bad Miracle? They Got A Word For That?”

After discovering the existence of aliens on his very own ranch, OJ begins to wonder about the purpose of such a revelation. In a moment of philosophical pondering, he wonders aloud to his sister Emerald whether there is a word for a “bad miracle.”

The concept of a “bad miracle” is an important piece of Nope’s symbolism, leaving many fans to wonder about the meaning of this term. Some have drawn parallels between “bad miracles” and the mysterious standing shoe that is shown during Gordy’s rampage. Others tie this idea to the film’s deeper themes regarding lifelong dreams that ultimately lead to one’s moral downfall. Nevertheless, OJ’s question proves to be endlessly thought-provoking.

“Maybe You’re In A UFO Hotspot.”

Endeavoring to become rich and famous for proving the existence of aliens, OJ and Emerald enlist the help of Angel Torres (Brandon Perea) to install video cameras on their property. After hearing of the strange goings on around the Haywood Ranch, Angel jokingly suggests that they are living in a “UFO hotspot,” only to learn soon thereafter that he had guessed exactly right.

Angel, as it would turn out, was the biggest believer in alien activity out of the entire cast, enthusiastically suggesting that aliens have been present on Earth for centuries. His throwaway line also proves to be strikingly accurate, as the neighboring theme park is later revealed to be what attracted the alien to the area in the first place.

“This Dream You’re Chasing… It’s One You Never Wake Up From.”

At the midway point of the film, Emerald and OJ attempt to enlist the help of cinematographer Antlers Holst (Michael Wincott) to capture the alien creature on film. While he would eventually join their efforts, Holst bashes Emerald’s dream of achieving fame, hinting that such aspirations only lead to misery.

Holst’s assertion that fame is a “dream that you don’t wake up from” carries with it a major theme of the film in that the pursuit of notoriety often takes one down undesirable paths that never seem to end. These words ring true in the film’s final act, as those unwilling to give up their loftiest aspirations find themselves consumed by the alien creature.

Nope shines by subverting what fans have come to expect from a film depicting an alien encounter. In the early scenes of the film, the Haywoods operate under the assumption that they have been dealing with an alien spaceship. However, after several encounters thereafter, OJ thoughtfully suggests that the so-called “ship” is not actually a ship after all.

The twist of Nope reveals that the presumed UFO has actually been a sentient being the entire time, consuming anything that makes the mistake of looking directly at it. In this revelation, Nope sets itself apart in the sci-fi genre, steering away from falling into the rut that so many generic alien films often do.

“It Was A One-Eyed, One-Horned, Flyin’ Purple People-Eater.”

In a scene reminiscent of Jaws, the protagonists plot how to destroy the alien creature. Adopting an eerie tone, Antlers Holst begins to recite the lyrics to Sheb Wooley’s 1958 song “One-Eyed, One-Horned, Flying Purple People Eater.”

This chilling song seems to perfectly describe the overall plot of Nope, which depicts a similar people-eater, though its physical characteristics do differ from that of the creature in Wooley’s song. Nevertheless, the lyrics adequately frame the new narrative revealed in the film’s third plot, while also setting an eerie mood before the final battle.

“What If I Told You That Today You’ll Leave Here Different?”

Steven Yeun joins the cast of Jordan Peele’s latest film as theme park promoter Ricky “Jupe” Park, who has a major scene near the end of the film in which he promises a crowd of people that their lives are about to be forever changed. As they would soon discover, his words were far truer than anyone could have guessed.

Yeun has appeared in his fair share of notable films over the last several years, but none that put him square in the spotlight quite as Nope does. It is the spotlight, however, that proves to be Ricky’s undoing, as the alien creature descends on his demonstration, consuming everyone in the arena and digesting them slowly over the course of several hours.

“We Don’t Deserve The Impossible.”

Antlers Holst meets his end after charging at the alien creature, bringing the footage of the beast with him in death. Just before he does so, however, Antlers tells Angel that they “don’t deserve the impossible,” referencing the impossible shot that he had just captured on his camera.

Holst represents the opposite end of the fame that characters like Emerald seek, having become jaded and bored after achieving such notoriety. Initially enthralled by the prospect of capturing an impossible shot, Holst elects to bring it with him in death, solidifying Nope’s cautionary tale about the pursuit of fame, fortune, and other lofty aspirations.

Indies Game Tips For Playing On PlayStation, Xbox And PC

The Mandalorian: Gina Carano lashes out at Disney