Home Entertainment 10 best quotes about the luck of Apple TV+ 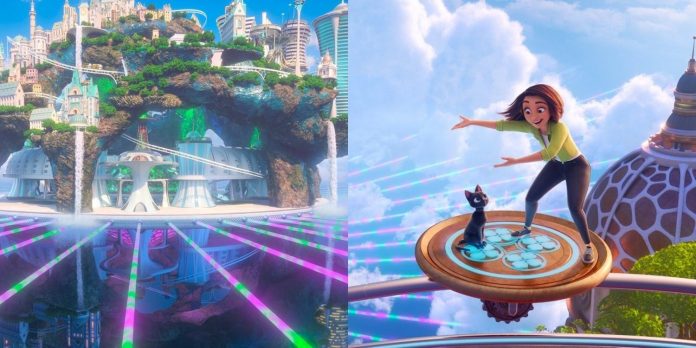 The new Apple TV+ movie Luck has quickly proven that it might just be one of the best animated movies of the year. It features a lovable set of characters, brilliant and colorful animation, and a potent message about the power of making own’s luck and not letting the past weigh one down.

Focusing as it does on a young woman afflicted with bad luck who nevertheless finds her way into the Land of Luck, it is a movie that relies a great deal on its sparkling dialogue and writing. Thus, it’s worth taking a look at some of the best quotes to emerge from the movie.

“You Sure Have Bad Luck, Sam Greenfield.”

The friendship between Sam and her young friend Hazel is one of the most important in the movie. This quote, in which Hazel bluntly points out the fact that her friend is afflicted with bad luck, manages to be both very accurate and also funny.

Like so many other children in animation, Hazel has the ability to point out the brutal truths of life, while also not failing to be cute and adorable as she does so. While the truth might hurt, it’s to her credit that she’s willing to speak it anyway.

Sam, Upon Trying To Thwart Her Bad Luck

Part of what makes Luck such a great animated movie of 2022 is its central character, Sam. In this quote, she reveals the extent to which she isn’t content to simply stand by and let the universe do what it wants with her.

In fact, from the very beginning of the movie, she shows remarkable resilience, always trying to do the right thing, even when it’s hard. She’s the type of heroine that is so refreshing to see in animated movies and TV, and it’s part of the reason she emerges as one of the movie’s best characters.

“You’ll Find Your Forever Family, Too.”

Many great characters have appeared in animated movies, and Sam is sure to become one of those. In large part, it’s because of quotes like this one, in which she rushes to reassure her young friend Hazel that she, too, will one day be able to find a family that she can spend her life with.

It’s a lovely moment between these two characters, particularly as each of them has had to contend with their status as orphans. What’s more, it reveals just how much Sam is willing to help and encourage others.

“I Flushed It Down The Toilet.”

Sam, After She Accidentally Flushes A Lucky Penny

Throughout the movie, Sam really does have more than her fair share of bad luck, but she tends to respond with at least a measure of humor. In this notable quote, for example, she wryly remarks on the fact that she managed to flush a very rare lucky penny down the toilet.

It is, of course, a very funny line, but it’s also one that shows just how self-aware Sam is and how willing and comfortable she is to be honest with herself.

Bob, Complaining About A Long Password For A Computer

Simon Pegg has had a number of great roles, and he has shown himself particularly adept at playing animated characters, in this case, Bob the cat. It’s one of the types of characters that Pegg excels at playing, with a brilliant sense of humor that is very much in evidence in almost every quote he speaks.

In this case, not only is the quote very funny, but it is also a relatable one that is sure to resonate with anyone who has ever had to contend with a very long computer password.

“You’ll Cause A Disaster.”

Like all great animated movies, Luck is very much about the back and forth and the banter between characters, which, in this case, is Sam and Bob. Theirs is a friendship that takes some time to develop, and Bob repeatedly demonstrates that he has what it takes to tell Sam the blunt and honest truth.

In this quote, for example, he points out to her that she could very well cause a disaster if she tries to procure a lucky penny. Unfortunately, it turns out that he is all right, with consequences that continue to escalate.

“I’m A Bad-Luck Black Cat And I Always Will Be.”

Bob, When His Real Identity Is Revealed

There have been many great cats in the history of the movies, and Bob should be seen as one of those. In one of the movie’s key scenes, it’s revealed that he isn’t lucky at all but, instead, exactly the opposite. It’s a very emotional scene, as he has to contend with the reality that he has been lying about who he is all along.

At the same time, it is also one of those moments in an animated movie where the character comes to a firmer and better understanding of who they are.

“That’s One Of The Advantages Of Bad Luck; It Teaches You To Pivot.”

Rootie, When He Gives Up His Good Luck

It is common wisdom that it is the villains that often make an animated movie, and the history of the form is filled with great baddies. Luck, however, turns this on its head with the character of Rootie, who is not nearly as bad as his reputation makes him out to be.

As this quote makes clear, he’s a very nice guy and more than happy with his lot as one of the purveyors of bad luck. Just as importantly, it’s also a piece of wisdom that demonstrates the need to be flexible in all circumstances.

“Whatever It Was, I Found My Forever Family.”

Sam, At The Movie’s Conclusion

A happy ending is always key to a successful animated movie, and Luck is no exception. At last, after having spent so much time struggling against bad luck, Sam finally finds the forever family she has always wanted, united with Bob and Hazel.

This quote reveals the extent to which she has finally found the happiness that she has been trying to attain for so long. And, having seen what she has been through, it’s impossible for the audience not to cheer for her as well.

“She’s Already The Luckiest Girl In The World Because She Has You.”

Bob To Sam About Hazel

Like all great animated movies, Luck has a very powerful message about the importance of family and friendship. In this case, Bob is telling Sam that, ultimately, whether Hazel procures a lucky penny or not is beside the point, because she is already very lucky because Sam is in her life.

There’s no doubt that Sam is,  indeed, the best friend that Hazel could ask for. It also means a great deal that Bob, for all that he can be a bit abrasive at times, is willing to tell Sam as much.

The first introduced game of Gamescom 2021 was Saints Row