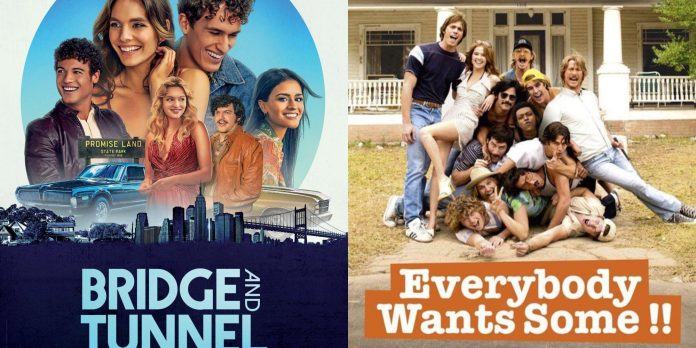 EPIX’s Bridge and Tunnel, set in 1980s New York, began its second season on July 10, 2022. This dramedy, written by and starring Edward Burns, follows a group of Long Island-native college graduates looking to start their imminent adult lives in Manhattan. The series grabs the viewer with its young love stories and nostalgia.

This hangout show is reminiscent of some great movies worth watching. Whether it be for the romantic quandaries or the fun retro vibe, these movies bring the same characteristics that an audience who enjoys Bridge and Tunnel would appreciate. And with Burns’ trademark use of a New York location, the east coast feel is also a commonality for some of these films.

In 1982 Long Island, love is in the air. It’s the summer before a group of friends goes off to school and there are choices to be made. Inevitably, some relationships will endure, reignite, or fall apart. Only time will tell which characters are willing to make things work.

RELATED: 10 Movies That Best Capture New York According To Reddit

This ’80s beach film was written by, directed by, and stars Ed Burns. It features everything from Long Island accents to retro music. The love stories and triangles are also prominent features of Bridge and Tunnel.

In one of Joseph Gordon Levitt’s best roles as Tom, he recounts his year-long romance with Summer, the woman he envisioned spending the rest of his life with, he realizes that he was chasing the wind. Summer was not interested in relationships and the status quo. They were destined to fail, but not without his vehement effort.

This film definitely shares the “hangout mood” of Bridge and Tunnel. Taking the audience through a day spent at IKEA is just one of the many everyday-type scenes in the movie. The romantic angle, though much more focused on one couple and the concept of fate, is also a shared feature.

After one too many tragic events, Drew heads from a big city to his father’s hometown of Elizabethtown, a small working-class town. His simple plan to attend his father’s memorial gets a bit hijacked by a flight attendant, one of Kirsten Dunst’s best roles. Over the course of the film, their romance blossoms and Drew recognizes the beauty that can be found in failures and small towns.

Much like Bridge and Tunnel, the draw of a small town, and the familiarity of being surrounded by those who know you, for better or worse, is found for Drew when he visits the place his father was raised. There is also the contrast between city life to the more suburban or rural setting. And the resistance to romance, while being completely faced with its potential, is a part of both this film and the television show.

The romantic film is set in the summer after high school in 1980s Connecticut. Three friends working at a pizzeria save up their tips and share their dreams. The waitresses are there for each other through all of the ups and downs of their respective love stories.

Much like the television series this film takes place seaside, between the end of school and adulthood. Pending decisions about career choices and who you might want to spend your life with make up the majority of storylines in both. There is also the theme of the support found in friends and being in your familiar territory.

In suburban New Jersey, a garage band with a dream dives into the rock and roll scene. Wanting to make the move from small time to playing in the East Village in the city means dropping out of college and going all in. Driven by a crush and new-found identity this is very much a coming-of-age story. And although it isn’t one of his best movies, James Gandolfini brings a strong performance as the lead’s sick father.

Though the film takes place in a different decade, those east coast vibes are strong. The serious consideration of where their futures are headed and whether they’re going to be able to do what they love or not is a commonality. And the splash of romance is a compelling element of these stories.

With isolated underground colonies living completely separate from each other due to the monsters lurking aboveground, meeting your soul mate can be challenging. After reconnecting with a girl from his past via radio, the motivation to face the dangers overhead compels Joel to pack up and venture away from his colony to hers.

Despite the semi-post-apocalyptic situation, this film undoubtedly conveys a sweetness to its romantic storyline. And much like the characters in Bridge and Tunnel, Joel reconsiders all of his goals and decisions based on the person he believes he will spend the rest of his life with. There is also a determination these characters share when facing, figurative and literal, monsters.

This hangout movie follows some college baseball players in the 1980s. From picking up girls to getting high, Jake, the freshman, gets a crash course in the irresponsibilities of transitioning into adulthood. The disco-dancing upperclassmen are more than his teammates, they’re mentors.

RELATED: Every Richard Linklater Movie Ranked From Worst To Best

It’s the seasons of transition that these stories share. Whether it’s longtime friends reuniting after time away at school or an incoming freshman learning to navigate his new societal expectations, there is an element of change, of a soon-coming future. And the brazen nostalgia from the era is everywhere in Everybody Wants Some.

An average guy, who has no logical means of attracting a woman at all, has managed to get a gorgeous and successful woman to fall in love with him. He’s not rich or famous, and his friends and family can’t seem to believe it. He knows how lucky he is and wants to make it work at all costs, but the unbelieving kin is creating tension and obstacles.

The air bout this film is fun. While the sense of humor varies, neither the show nor the movie takes themselves too seriously. With laughs throughout and buddies divulging too much personal information when it comes to their love lives, both Bridge and Tunnel and She’s Out of My League possess a playfulness that really grabs the audience.

A couple, played by Owen Wilson and Rachel McAdams in one of her best roles, goes to Paris on a trip together. While there, Gil discovers a world he never dreamed of experiencing, back in time. Ultimately driving a wedge between them he must decide if he has a future with his fiancé or in the past, in a time that’s calling to him.

The characters in Bridge and Tunnel also face a draw or pull of sorts when facing their futures. Whether romantically, like Gil, or in regards to their livelihoods, for this moment, they’re drawn home to Long Island and to each other. And much like Gil, they need to make the choice for themselves, whether or not those around them agree.

When young Nina returns home to West Orange, New Jersey, she connects romantically with the father of a neighboring family of friends. The familial relationships are thrown into an upheaval when they are found out. The affair creates tension for everyone and separation between the man and his wife.

Life and love in the tristate area can be anything be straightforward. Though the level of controversy may not be comparable, both the film and series deal with family connections and how relationships can complicate things with people you’ve known a long time. They both also portray a variety of east coast characters.