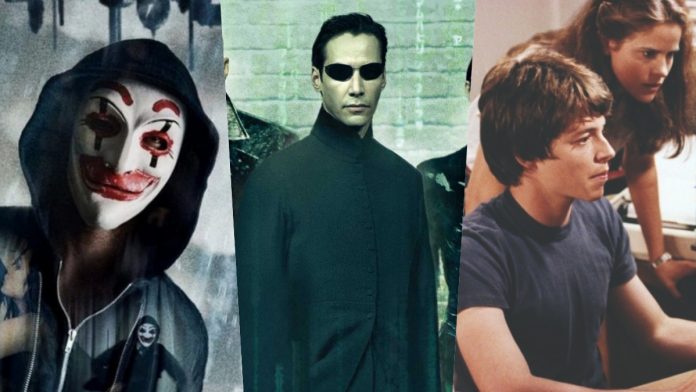 Hollywood movies that focus on cybersecurity or hackers often go through scary theories. But there are also extremely unsettling productions based on real events. In this content, we take a look at the 10 best hacker movies of all time we have prepared for you.

“Getting smarter” of almost every item around us provides us great convenience. But it also obliges us to pay attention to one very important point: Data security. It should not be forgotten that every device connected to the Internet can be the ‘digital barrels’ of hackers. Studies show that in 2020, hackers earned $ 25 billion in revenue for the data they stole.

Hackers, the nightmare of private companies and states, are among the favorite subjects of Hollywood. Just below, you will see a list of the top 10 hacker movies of all time. If you wish, let’s move on to our list without wasting time.

Matrix is ​​arguably one of the most iconic science fiction-hacker movies of all time. The Wachowski Brothers’ unforgettable trilogy is about a computer programmer named Neo who discovers that the whole world is actually simulation and his battle.

The series, which consists of three films in total, is among the most valuable works of science fiction corpus. The series’ cast includes names such as Keanu Reeves, Laurence Fishburne, Carrie-Anne Moss and Hugo Weaving.

Meanwhile, the fourth movie to be added to The Matrix universe will be released on December 23, 2021. Reeves and Anne Moss will return to their roles in the series. But there won’t be characters like Agent Smith or Morpheus. We’ll be watching names like Neil Patrick Harris, Yahya Abdul-Mateen II, and Jessica Henwick instead.

WarGames, directed by John Badham, follows the story of David Lightman, a hacker who gains access to a military supercomputer.

The computer called War Operations Plan Response is programmed to wage a possible nuclear war against the Soviets. Trying to access his school’s computer system to change his grades, our hero unwittingly finds himself in the nuclear program.

Then the supercomputer takes action and starts to activate all the systems that could cause the start of World War III.

The film stars stars such as Matthew Broderick, Dabney Coleman and Ally Sheedy. WarGames, considered one of the leading productions of its age, was nominated for three Oscar Awards. If you’re looking for a good hacker movie, be sure to check out WarGames.

The Italian Job is among the best action productions on the concept of hacker. The film follows the adventure of a gang who hacks the traffic lights of the city for a massive heist.

Is Snowden a public figure of US listening and surveillance, a hero who bravely fights for the privacy rights of US citizens, or a traitor revealing government secrets? The movie follows this question.

Directed by Oliver Stone, the production chronicles Snowden’s time in the US Army, CIA, NSA, Japan and Hawaii.

Eagle Eye, a pure action hacker movie, is about two people who are forced to follow orders from an unknown source. The mysterious resource infiltrating bank accounts, traffic lights, cell phones, and even power lines turns the life of Jerry Shaw (Shia LaBeouf), an unemployed and irresponsible man, into a dungeon.

Our hero, whose life is completely upside down, tries to find out who is behind this game with Rachel Holloman (Michelle Monaghan), who is threatened by the same voice.

Who Am I, one of the most successful films to be exported by German cinema, follows a computer genius named Benjamin who wants to join a globally renowned hacker gang.

Our hero gets the offer he has been waiting for from the underground hacker group called CLAY. But this invitation becomes the beginning of the end for him.

Baran bo Odar is the director of Who Am I, a truly hacker movie. The movie stars Tom Schilling.

The Minority Report depicts a future through technology where crimes are detected before they are committed. John Anderton, a successful and intuitive detective, is accused of a crime he has not yet committed. Our hero, accused of murder, runs away from the cops and tries to find out the reason for his hunch.

Directed by Steven Spielberg, the movie stars Tom Cruise. Drawing an eerie projection of the future, Minority Report is among the movies you should definitely watch.

Live Free or Die Hard, the fourth sequel to the Die Hard series starring Bruce Willis, focuses on the concept of “cyber terrorist”.

A hacker group carrying out cyberattacks on state-owned institutions through a program steals trillions of dollars from the Central Banking System.

Our hero, John McClane, brought to life by Willis, works with a former National Security Agency (NSA) hacker to track down the security expert who created the program.

The founder of the site, the hacker Julian Assange, is the main character of the movie. The Fifth Estate tells behind the scenes of many events such as the hacked email account of American politician Sarah Palin, the discovery of the Church of Scientology, and Chelsea Manning’s leaks on national defense information.

Written by Josh Singer, the film is directed by Bill Condon. We strongly recommend that you add The Fifth Estate, which is entirely based on real events, to your watch list.

The hacker movie 23, directed by Hans-Christian Schmid, focuses on the young hacker Karl Koch, who died of suicide on May 23, 1989. Koch, who started seeing the number ’23’ everywhere, encounters a worldwide conspiracy as he deepens his research.

To find out more, the hacker asks his friend David for help getting into the global data network. The two, who have started accessing government and military computers, go to East Berlin and try to reach the KGB.