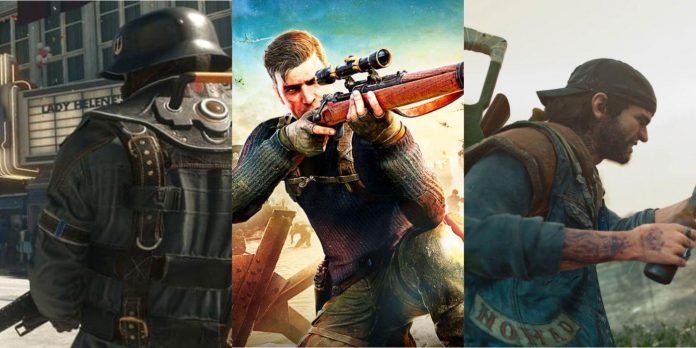 The recent release of Sniper Elite 5 has been widely acclaimed, with some calling it one of the best games of the year. As a new addition to the Sniper Elite franchise, Sniper Elite 5 has received exceptionally positive reviews and continues to entertain fans who immediately start playing.

Since its release, it’s very likely that many fans have gone through the entire game. If so, and fans are looking for something new, there are many games with a similar plot and action.

Like many previous games, Elite Sniper 5 places players in World War II, one of the most popular settings for games based on war. Due to the ever-growing popularity of this genre, one game has been added to this list — Insurgency: Sandstorm.

The game begins on the streets of Iraq, and two sisters are separated, one of whom is the main character. Joining the ranks of the rebels, the main character of the game is fighting radical rebels. This is a team game that features melee combat with goal-oriented multiplayer gameplay that has a lot to offer to those who play it.

Some games immediately jump into action without a specific storyline or story mode. These games throw players straight into battle, and Counter-Strike: Global Offensive does just that.

The game is similar to the previous parts of the series and is a multiplayer first-person shooter. Working with the team to which the player is assigned, he will compete with another team. The teams are called Terrorists and Counter-Terrorists. And by shooting at enemies, players must provide a place to plant or defuse bombs, as well as kidnap or rescue prisoners, so get ready to juggle a few things.

Imagine if the Nazis took over the world and in order to survive, you need to obey and keep your head down. But hope is just around the corner when the Resistance unites to regain control.

Wolfenstein II: The New Colossus is highly recommended even for those who are not particularly interested in first-person shooters because of the intense gameplay, blood and moments of humor. In this first-person shooter, you play the scourge of the Nazi empire, B.J. Blazkovich, also known as “Terror Billy”, enjoying various weapons and enjoying the destruction of the Nazis.

Like Counter-Strike: Global Offensive, Ready or Not immerses players in the action, experiencing intense and exciting gameplay. The goal is to rescue the hostages from their kidnappers and work to make the city safer.

Ready or Not is a first—person shooter with five game modes in which the player can play alone together with AI teammates or with other players online. The player takes on the role of a Military Judge, an elite special forces commander tasked with defusing tense and hostile situations in this crime-ridden city. This includes the use of lethal and non-lethal means, and if non-lethal means are used, players get more points for arresting suspects rather than killing them.

Hell Let Loose is considered one of the most historically accurate games about World War II. This is a multiplayer tactical first-person shooter offering players a variety of actions. It is also considered an entertaining online multiplayer game.

As usual in any war game, there are different teams, and 50-50 matches between two teams of Germans and Americans, with the recent addition of Soviets. The developers added that communication is an important factor, so it’s good to have open communication with your teammates while working on defeating enemy soldiers.

Although this is not a war game, it is a struggle for survival, involving a large number of weapons and fighting zombies, which now threaten the lives of the main character and the people around him. It has also been recognized as one of the best adventure games, which makes Days Gone worthy of attention.

Players will take on the role of ex-criminal and biker Deacon St. John, who is looking for his missing wife. It is a third-person action game in which players can use firearms, melee weapons and improvised weapons.

The Suicide Squad: Brutal Final Trailer Of The Craziest Group Of...