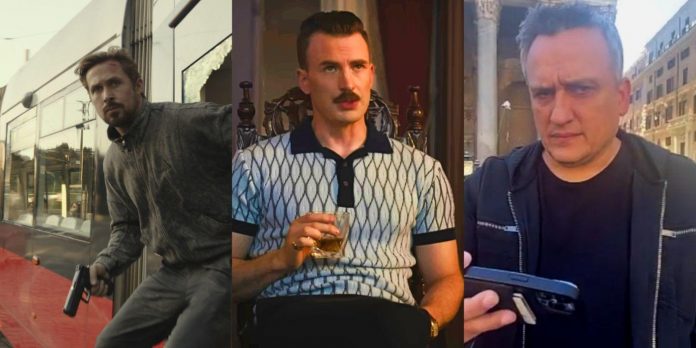 The Russo Brothers’ new movie The Gray Man has just had a limited release in theatres and it’s available to stream on Netflix now, but it hasn’t been getting the best reviews. The new cat-and-mouse thriller has been criticized for being lazy and uninspired. And based on the stories about the production, it sounds like making the movie was more fun than watching it.

While The Gray Man might not be the Russos’ best work, there’s no denying how ambitious and passionate they are, and that’s clear from the film’s production. Between shutting down Prague for weeks on end, editing while sight-seeing, and working on the script between MCU movies, few other films have been given as much attention.

The Russos Won’t Be Allowed In Prague After Shooting There

While most movies are shot in front of green screens on soundstages these days, the Russos often shoot on location, and that’s no different with The Gray Man. The brothers explained that they often have to shut down roads and even freeways for an extended period of time, and the latest example of that was in Prague.

RELATED: The Russo Brothers’ 8 Best Movies, According to Metacritic

The filmmakers mentioned that the same thing happened when they shot in Cleveland for Captain America: The Winter Soldier too. Joes Russo noted, “They weren’t happy. It was very short-lived. I don’t think we can go back to Prague or Cleveland, but we’re very grateful that we were able to shoot on location.”

Chris Evans has enjoyed playing a whole range of characters after the chapter was closed on Captain America. The actor clearly had fun cameoing in both 2021 movies Don’t Look Up and Free Guy, and most recently, he voiced the iconic space ranger in Lightyear. However, Evans has expressed just how much he enjoyed playing a villain in The Gray Man. That’s mostly down to the great working relationship he has with the Russos, as this is their fifth movie together.

The actor commented, “working with the Russos is what gives that sense of trust and freedom. When you trust the filmmakers, you’re more willing to take risks, and certainly, a character like this demands risks.” But it isn’t Evans’ first time playing a villain, as he also played Ransom, the least likable Knives Out character, in the 2019 murder mystery film.

The Russos Have Wanted To Make The Movie For Eight Years

The source material landed in the hands of the Russos over eight years ago, as the directing duo explained that they read and fell in love with it while they were shooting Winter Soldier. They mentioned, “We actually did the first adaptation of it in between takes while we were directing Winter Soldier as a potential movie to direct after we were done with it.”

But after they had completed their first MCU movie, they were recruited once more for Captain America: Civil War, and then again for two back-to-back Avengers movies. That meant that the project had to keep getting put on hold. The brothers also stated that they had wanted to cast Evans in the villain role the whole time.

There’s always some kind of controversy surrounding mustaches in Hollywood. First, it was mustache-gate, which was the name given to the Justice League reshoots where effects artists had to digitally remove Henry Cavill’s mustache, which he was contracted to keep for Mission: Impossible – Fallout.

Now, Netflix is selling a mustache replica of Chris Evans’ facial hair from The Gray Man. Though Netflix often falls short when it comes to marketing their movies, the streamer is pulling out all the stops for this one, and the merchandise has even been named “the trash stache.” Tweeting about the new merch, the Russos wanted to know if it smells like Evans too.

A Prequel Is In Development With The Deadpool Writers Attached

Two months before the movie’s release date, Netflix already announced that a The Gray Man prequel is in development with Rhett Reese and Paul Wernick, the Deadpool writers, attached to pen the screenplay. Netflix might be jumping the gun a little, as the streaming platform doesn’t even know how well the movie will perform. And given that the movie isn’t getting the greatest reception from critics, it might not be the best idea to announce more just yet.

The decision to announce more movies in a series before seeing how people respond to the first film has embarrassed studios in the past. The best example of that is when the heavily marketed Universal Dark Universe was canceled after the poor performance of The Mummy. However, if anybody can write a fun and exciting follow-up, it’s the real heroes of Deadpool.

Gosling Wants The Movie To Start A Franchise

Netflix isn’t the only one who is excited to see where The Gray Man might lead, as Ryan Gosling, who plays Sierra Six, wants the movie to start a franchise too. The actor excitedly explained, “I loved making this film. I’d love to do it again. I’m hoping we can bump Six up to a name status at some point, just for his own sanity.”

However, that sounds strange coming from Gosling, as, though he has played loads of great characters, many of which audiences would love to see again, he has never once been in a sequel to one of his own movies. And if Gosling has changed his tune about doing sequels, fans want him to reprise his role of Holland March for The Nice Guys 2 before returning to the Netflix series. And while it’s unlikely, a Drive 2 would be fantastic too.

While the Russos are seemingly big travelers, they aren’t tourists whatsoever. The duo uploaded a video to their Instagram account that should Joe Russo surrounded by beautiful buildings in Rome. But it doesn’t look like he could care less, as his eyes are glued to his phone.

RELATED: The Gray Man – 10 Other Action Films Where A-List Stars Faced Off

According to the clip’s description, the Russo brother was actually editing The Gray Man on the go. Given that the movie had a budget of $200 million and has made headlines for how much Netflix dropped on the film, it’s ironic that the filmmakers are editing the blockbuster with a device that everyone has.

While the new movie’s big appeal is how it pits Evans and Gosling against each other, Ana de Armas also has a big role. De Armas became a movie star almost overnight, as she’s had so many roles in huge blockbuster movies in such a short space of time, from Knives Out to No Time to Die.

Armas thought her role in The Gray Man was refreshing because she doesn’t play a character defined by her looks. The actor explained, “It is something really refreshing about this one, where the focus is not on that. I’m not Ryan’s love interest. We’ve done that, too. We’ve been there. It’s about her power in a different way, and it’s really cool.”

The Russos See It As A Companion Piece To Winter Soldier

Though the Russo brothers had directed the comedy movie You, Me and Dupree and several episodes of Community, Winter Soldier was a big level up and their breakthrough film. The movie showed how well they could shoot action, and they impressively completely changed the genre of the Captain America movies.

Where The First Avenger was a period war movie, Winter Soldier was a thrilling espionage spy movie, and that’s why the directors think The Gray Man is a companion piece to the MCU movie. Joe Russo commented, “They’re action-thrillers that deal with very current thematics like espionage and deal with characters with very emotionally complex situations. And they’re both globe-trotting.”

Evans Got Beat Up While Filming

These days, more and more actors commit to doing their own stunts, and Evans is no different. But there’s a reason why actors have stunt doubles, as performing stunts is extremely dangerous and could lead to injuries, and, sometimes, even fatalities. While it’s on the lower end of the spectrum, Evans turned to Instagram to let fans know how beat-up he was getting during production.

The actor got a huge bruise that covered most of his arm and posted, “It’s like watching the leaves turn in autumn, but condensed into one painful afternoon.” Evans never gave away how he got the gnarly bruise, whether it was committing to some stunt or getting into a bust-up with Gosling. However, if one thing guarantees an exciting movie full of great action, it’s a bruise that covers almost the whole of Evans’ forearm.