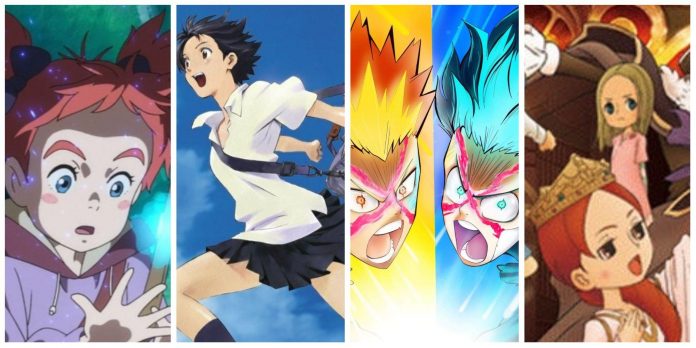 In this era of streaming platforms as the primary access point to media, movie lovers are less likely than ever to purchase individual film titles. Even anime movies, which account for far less of mainstream media than American-produced live-action films, have found themselves at home on one streaming service or another.

Most notably, HBO Max has amassed nearly every Studio Ghibli film, from the internationally acclaimed Spirited Away to hidden gems like Only Yesterday. Yet despite the hefty acquisitions of HBO Max and other streaming platforms, there are still quite a few incredible and even highly notable anime films that viewers will not be able to enjoy with a subscription. Here are 10 amazing anime films currently unavailable on any North American streaming services.

This notorious tearjerker is the only Studio Ghibli film missing from HBO Max’s lineup, due to its distribution rights belonging to the Shinchosha Publishing Co. Whether viewers would rather rent, purchase, or wait until the film finds its way onto a streaming platform, Grave Of The Fireflies is a must-see for anyone who considers themselves a movie connoisseur.

Adapted from a short story based on Japanese author, Akiyuki Nosaka’s, own experiences during World War I, the film has been considered by critics as both one of the best war films ever made and an iconic piece of Japanese animation.

Despite being one of the highest-grossing anime films of all time both worldwide and in Japan, this critically acclaimed fantasy romance is nowhere to be found in the realm of streaming. A mesmerizing blend of gorgeous animation, melodious songs, an entrancing narrative, and a myriad of covert details that need a few rewatches to catch, Your Name is well worth the price of purchasing a permanent copy for your entertainment collection.

A live-action remake is currently in the works, with J.J. Abrams as co-producer. Hopefully, the reimagined film will, unlike its predecessor, be available to stream.

Many Studio Ghibli lovers forget that this coming-of-age fantasy isn’t actually produced by the animation studio, despite feeling incredibly reminiscent of its magical yet grounded maturity titles. This is most likely not coincidental as Studio Ghibli is where the film’s director, Hiromasa Yonebayashi, started his film career.

Games to Play If You Like Studio Ghibli Films

Unfortunately, it means that the Studio Ponoc film isn’t alongside Yonebayashi’s previously directed film, When Marnie Was Around, on HBO Max. However, if viewers have already binged through the streaming platform’s Studio Ghibli collection and are craving something similar but new, Mary And The Witch’s Flower would make for a satisfying splurge.

To anyone who thinks that animated films cannot be dark, disturbing, and stylistically experimental, Perfect Blue proves them wrong. The psychological thriller follows an idol turned actress as she tries to create a new image for herself as she grabbles with a stalker, a trail of deaths that seem to circulate around her, and her own crumbling mental states as she and the viewers struggle to figure out what’s real and what’s fake.

A dizzying dive into the divides and intersections of reality and self-image, this film doesn’t need to be streaming to be worth watching.

Although nowhere near as acclaimed as its predecessor, this stand-alone sequel to the science fiction classic, Ghost In The Shell, is still an enjoyable film in its own right. Although Major Motoko Kusanagi, the primary protagonist of the Ghost In The Shell franchise, is still a major player in the film, Innocence centers on her former subordinate Batou as he investigates a series of murders involving glitching gynoids, feminine humanoid robots.

Critics and fans are still debating whether the film is overly dense and philosophical or complex and intellectually stimulating but all unanimously agree that the animation is absolutely breathtaking.

Heroes Rising is the popular manga series’s second feature film. The plot takes place after the events of the manga Meta Liberation Army arc. My Hero Academia’s creator and supervisor of its films, Kōhei Horikoshi, has confirmed that all of MHA’s films are canon to the manga. Therefore both fans and non-fans of the manga will want to make sure they’re up-to-date on the plot in order to avoid potential spoilers and to have the story context necessary to fully enjoy the film.

MHA’s third film, World Heroes’ Mission, will begin streaming on Crunchyroll in August 2020 so subscribers should speedily rent or purchase Heroes Rising in order to watch its sequel the moment it drops.

In spite of its fourteen-minute standing ovation at the 2021 Cannes Film Festival and five Annie Award nominations, this Beauty and the Beast-inspired science fantasy has yet to be snatched up by any streaming platforms.

Although not technically a musical, Belle’s soundtrack is at the heart of the film, following the protagonist who adopts the French word as a pseudonym for her idol persona in the beautifully rendered “U” metaverse. Since Belle is still recent, there’s hope this gorgeous film will join a streaming library soon.

Lelouch Of The Re;Surrection serves as the sequel to the three-part Code Geass compilation film, which set up an alternate universe from the critically acclaimed Code Geass mecha anime series. Although the films have already established themselves as having their own canon storyline, Re;Surrection is particularly controversial among fans of the original series for drastically altering the show’s iconic ending.

However, with the announcement of a sequel anime series in Re;Surrection’s alternate universe, viewers should consider putting canon divergence pet peeves aside to see where this new storyline goes.

As its title implies, The Girl Who Leapt Through Time is about a girl who suddenly gains the power to time travel through “time leaps”. Even non-science fiction fans will enjoy this film which is far less about the mechanics of time traveling, and much more about growing up and learning not to take the things (and especially the people) you have in the present for granted.

The movie’s beautiful themes are matched with equally captivating art. For those interested in the story but unwilling to pay for an individual film, there is a manga of the same title with some slight plot divergences.

Rather than being adapted from an anime or manga series, this film is based on the Professor Layton puzzle video game franchise. The film features an original plotline that’s loosely tied to the games and retains its trademark puzzles. Though viewers will have to either click pause or think fast in order to solve the puzzles before the characters do.

The art style, like the games, is simple but charming and the usual pleasant soundtrack, which features an actual orchestra, has a few particularly enchanting tracks in consideration of its opera setting.

Will Matt Smith return for the 60th anniversary of Doctor Who?