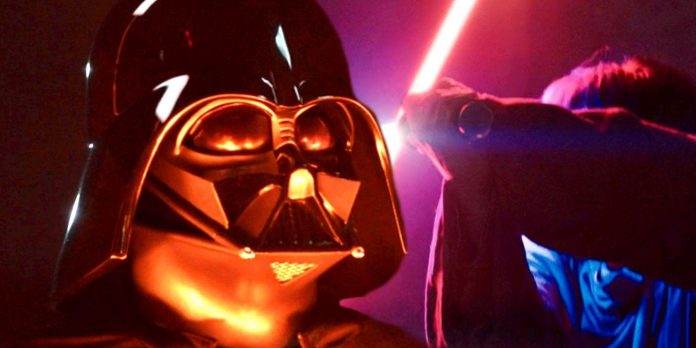 Darth Vader’s brutal treatment of his old master in Obi-Wan Kenobi testifies to his fall to the dark side, however, one line from Star Wars explains why Obi-Wan was still able to escape the collision. Episode 3 of Obi-Wan Kenobi showed Anakin Skywalker at his most reckless masochism, but despite all his rage and hatred, he failed to kill his former friend. While this can be explained by his apparent desire to see Obi-Wan suffer, there is another possible explanation, which was later hinted at by his son Luke.

“Chapter 3” has provided Star Wars fans with perhaps the most terrifying version of Vader. After tracking Obi-Wan to the imperial mining planet, the Sith killed and tortured innocent civilians in an attempt to lure the Jedi out of his hiding place. Chasing him outside the village, Vader easily defeated Obi-Wan in battle before igniting a blazing fire and dragging the protagonist through the flames. Although the Jedi was successfully rescued, Vader’s superior strength and sadistic tendencies were fully manifested.

However, despite all of Vader’s obvious malice, this scene raised a key question about the true nature of his character. Using the Force to drag Kenobi over the coals, Vader would have been more than capable of finishing the job, even after his rescuers arrived. However, he is mysteriously pleased that he allowed Kenobi to escape, despite his determination to make him “suffer” in the fire. This seemingly uncharacteristic decision correlates with Luke Skywalker’s later remarks in Return of the Jedi that “there’s still something good about him.” Despite all his obvious rage, the sight of his burning friend stirs something in him that makes him hesitate, emphasizing that Luke really had good reasons to believe the best about his father.

A more cynical interpretation of Vader’s actions is that the Sith actually just enjoyed the spectacle of watching his mentor suffer, and just waited before returning him to his clutches. After all, his actions throughout the rest of Chapter 3 definitely make it clear that he is not averse to the atrocities that inspired his reputation as the Empire’s most feared enforcer. However, this analysis does not adequately explain why, after waiting so long for Kenobi to be in his hands, Vader simply lets him go and risks escaping again.

Instead, it seems much more likely that the kindness in Anakin Skywalker’s heart flares up—if only for a moment—at the sight of his friend suffering as a result of his actions. This temporary omission is enough to allow Kenobi to escape, as well as to reveal hidden depths to the surprisingly multifaceted Dark Lord. In a sense, this moment corresponds to the climax of Return of the Jedi, in which the sight of Emperor Palpatine torturing his son prompts him to reject his master. Although the scene with Obi-Wan Kenobi doesn’t go that far, Vader’s hesitation in the face of a loved one’s suffering is eerily reminiscent of this classic moment.

Luke’s determination to prove his father’s morality, coupled with Padme’s assertion that “there is still something good in him”, sometimes seemed confusing, as the faith of both characters seems to be motivated more by faith than by any actual evidence. However, by showing Vader’s inability to finish off Obi-Wan in one swift blow, Obi-Wan Kenobi actually proves that the character has always had a complex moral foundation. While there is no doubt that Vader’s harrowing actions, on the one hand, represent moral decline, it is equally true that he is not as cold-blooded evil as a character like Emperor Palpatine. It seems that despite being led to believe that his monstrous transformation was the fault of Obi-Wan, he is not so lost that the reality of killing his friend does not make him hesitate.